Titanic vs. Modern Cruise Ship: How Do They Compare? 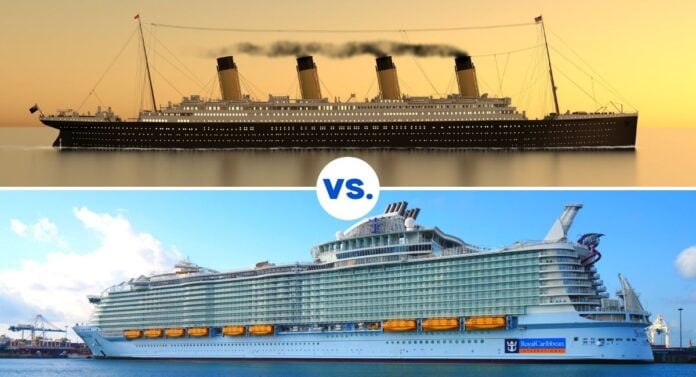 When you think of the most famous cruise ship in history, what ship do you envision? Probably the Titanic, right? Let’s see how Titanic vs. modern cruise ship compares, including the world’s largest cruise ship, Symphony of the Seas.

The largest ship in the world when she set out from Southampton, the Titanic was a vision of luxury then and still is romanticized to a great degree now, with pop culture references making the Titanic synonymous with rich aristocracy, ball-gowned ladies and tuxedoed men, chandeliers dripping with diamonds, fine-dining feasts and popping Champagne.

To give you an idea of what the Titanic was really like, as compared to the cruise ships you know and love for yourself, we’re breaking down all the need-to-know facts in our Titanic vs. cruise ship comparison — from the size to the cabins to the dining and entertainment.

How Big was the Titanic?

First things first, let’s look at size. After all, if the Titanic was a huge ship just about a hundred years ago, surely it is still at least a moderately large ship by today’s standards… right? Not quite.

Think about how quickly cruise lines today trade off the “largest cruise ship in the world” title — they’re all competing to be the biggest and the best, with new, bigger cruise ships coming out every year. The Titanic can’t stand up to that sort of competition. Let’s take a look at Symphony of the Seas vs Titanic:

And how are today’s biggest cruise ships compared to the Titanic? The current, largest, in-service cruise ship is Royal Caribbean’s Symphony of the Seas. It measures…

The next world’s largest cruise ship not yet launched but on order is Royal Caribbean’s Wonder of the Seas, slated to debut in 2022, and it measures much the same.

Even if you look at the 40th largest cruise ship on the oceans today, which is Royal Caribbean’s Mariner of the Seas, you’ll still end up with a vessel that’s significantly larger than the Titanic. Mariner of the Seas measures in at a mere 139,863 gross tons and just over a thousand feet long, with capacity for 3,114 passengers and 1,185 crew members.

Here’s further how the Titanic compares to all of today’s major modern cruise ships regarding GT, length, and passenger capacity. Take a look at the Titanic size comparison table below:

While the Titanic split passengers into first, second and third classes, today’s cruise ships would never do something so possibly offensive. Instead, they offer upgrades upon upgrades, and those who pay for those pricey upgrades get the best treatment.

Think of the VIP cabins and private pools and restaurants that are available to MSC Yacht Club passengers, for example; it’s just like their very own first class, just by a different name. So maybe things aren’t so different after all.

And much like many of today’s best cruise ships aim to model their cabins after high-end hotels, with modern and luxurious furnishings, right down to the interior cabins (just take a look at some of Royal Caribbean’s newest ships), so did the Titanic. In fact, the Titanic’s designers looked to the Ritz Hotel in London as inspiration for their decor.

As such, the Titanic’s cabins and common spaces were decked out with elegant European-style decor, with sweeping staircases (yes, including the one from the movie), ornate woodwork and luxurious furnishings.

In total, the Titanic featured around 350 first-class staterooms, of which a small portion could be used as second-class staterooms if needed. The most luxurious of the Titanic’s staterooms were decorated in nearly a dozen different styles, from Georgian to Jacobean to Italian Renaissance, with a fine attention to detail in recreating every historic aspect of the various decor styles.

Depending on where a passenger’s stateroom was located on the ship, that luxury extended out into the halls, via cut-glass ceiling fixtures, gilt details and more.

Unfortunately for passengers at the time, while every single cabin on today’s cruise ships comes with its own private bathroom (even if it is a slightly cramped one), that wasn’t the case on the Titanic. Instead, many first-class passengers, despite their luxury, were forced to share communal restrooms.

Additionally, due to a lack of fresh water, baths were taken in sea water and, for similar reasons, there was no laundry service, even for the sheets (though first-class passengers had their linens changed daily).

Still, those second-class passengers still had their linens changed daily, and there was a sink in each cabin, even if the restrooms were communal.

But no one had it as bad as those in third-class; though, compared to other trans-Atlantic liners at the time, the situation could have been worse. The Titanic’s third-class passengers numbered about a thousand individuals.

Cabins were outfitted for 10 passengers each and were located near the engines. And for all of those passengers, there were only two bathrooms. Third-class passengers were fed a basic diet, nothing fancy, but the food was free and there were leisure spaces for the guests to socialize.

Today’s cruise ships are basically floating resorts, a playground filled with tons to do and see. For example, Symphony of the Seas boasts an aqua theater, 24 pools, waterslides, a FlowRider surfing simulator, a floating Central Park, 23 restaurants and more. A passenger could hardly ever be bored when taking a Symphony of the Seas cruise.

While you wouldn’t find any surfing simulators or rock-climbing walls on the Titanic, you would find lots of entertainment venues suitable to the day.

There was a gymnasium that featured the workout gear that you would expect at the time, as well as a few pieces that would be recognizable to cruisers today (like stationary bikes, though you likely wouldn’t recognize the electric horses and camels).

Instead of a spa, there was a Turkish bath, steam room and massage room. There was only one pool, compared to the many, many water attractions you’ll find on today’s cruise ships.

Other entertainment-geared spaces included a squash court, smoking room, lounge, reading and writing room and promenade. You would not, however, unlike on today’s cruise ships, find huge theaters or cover bands.

For the longest time, cruise ship food didn’t receive a great reputation, but thanks to a few modern cruise lines’ efforts, that’s all changed. Today, you can find fine dining experiences from lines such as Norwegian and Royal Caribbean, with literally dozens of places to eat and drink.

Choices weren’t so plentiful aboard the Titanic, though. The ship boasted four restaurants: A la Carte Restaurant, the Dining Saloon, the Verandah Cafe and the Cafe Parisien.

A la Carte Restaurant was open to first-class passengers only and was one of the earliest examples of for-a-fee dining on a cruise ship (really!). An alternative to the main dining room, it was smaller and served the most fashionable of French decor.

Passengers could show up and dine whenever they liked, no set dinner times required (again, much like for-a-fee dining on today’s cruise ships). A passenger would later describe the food as “superb” and including “caviar, lobster, quail from Egypt, plovers’ eggs, and hothouse grapes and fresh peaches.”

The Dining Saloon, on the other hand, was basically the ship’s equivalent of today’s main dining room. Passengers were assigned seating for the length of the voyage and had to show up at specific times in order to eat.

Both the Verandah Cafe and the Cafe Parisian were located off the promenade, and offered a more intimate, casual dining experience than could be found with the other two selections.

This question doesn’t really need to be asked, but for comparison’s sake, let’s look at how the Titanic stacks up against modern cruise ships in terms of safety features.

The Titanic was only equipped with 20 lifeboats, or enough lifeboats for 1,178 people. The ship was also outfitted with approximately 3,500 life jackets and 48 life rings. However, those were of little use, given the temperature of the water and the quick onset of hypothermia.

In comparison, Royal Caribbean’s Symphony of the Seas is equipped with 18 lifeboats that are able to fit 370-people each, or enough  for 6,660 people.

While this does leave one to wonder what the crew is expected to do if the ship is at max capacity and all lifeboats are needed, Symphony of the Seas is obviously far more equipped to deal with a disaster than the Titanic ever was.

How Will the Titanic II Stand Up to the Competition?

After the sinking of the Titanic, the White Star Line, which operated the ship, merged with Cunard, which was (and still is) known for famous ships such as the Queen Mary 2. Cunard is now owned by the Carnival Corporation. But while Cunard has no plans to revive the Titanic name, other projects around the world have attempted to do so.

In 2012, Blue Star Line, based out of Australia, launched a Titanic II project, hoping to replicate the fateful ship. Still, though, even with all the modern advancements of cruising, the Titanic II won’t quite be able to stand up to today’s biggest and best cruise ships — that is, if it’s even completed at all. The line hasn’t updated followers on its project, which was due to be completed in 2016, since 2019.

Plans for the Titanic II included a total weight of only 56,000 GT, with a passenger capacity of 2,435 maximum. Despite the similar size, the construction was projected to cost more than the original Titanic, even if you put the Titanic’s historical cost in today’s money; the Titanic II was estimated to cost $500 million.

More recently, a similar project is underway in China. The Romandisea Titanic began construction in 2016 and is designed to be another replica, though this one isn’t intended to actually sail anywhere and will be permanently docked. As of summer 2021, construction was still underway.

How large was the Titanic?

What is the largest cruise ship today?

The current, largest, in-service cruise ship is Royal Caribbean’s Symphony of the Seas. It measures 228,081 GT, with 18 decks and a passenger capacity of 6,680 passengers and a crew of 2,200.

What cruise line did the Titanic sail for?

The White Star Line operated the Titanic. A previous shipping line, White Star operated multiple passenger ships, but today is known best for its losses. Beyond the sinking of the Titanic, it also lost the HMHS Britannic and the Republic, all in a 10-year period. White Star eventually merged with Cunard Line.