How Cold Was the Water When the Titanic Sank?

How cold was the water when the Titanic sank? Was the temperature responsible for the tragic loss of life? Keep reading to find out more.

While the Titanic originally made headlines for being an unsinkable passenger ship, what it made history for was its majesty, luxury, and tragic demise on its maiden voyage. It changed how people viewed international travel and affected safety protocols for the future.

The ship sank in the North Atlantic Ocean in April, causing many people to wonder, just how cold was the water when the Titanic sank?

Many passengers had left behind their old lives in order to begin new ones in a new land full of opportunity. The Titanic was supposed to be the beginning of a new, luxurious method of living globally.

Instead, it was a reminder that anything can happen while traveling on open seas. Its sinking led to the loss of hundreds of lives, both passenger and crew, and the destruction of countless dreams.

How Cold Was the Water When the Titanic Sank?

The water surrounding the Titanic when it sank on April 15, 1912 was 28°F. The SS Californian traveled through the same icy water close to where the Titanic sank. Captain Stanley Lord provided the water temperature to authorities while tracking it.

Although the SS Californian was relatively close, it was too far away to help the passengers of the Titanic. The closest ship at the time of impact was a sister ship called the RMS Carpathia. Unfortunately, this ship was 58 miles away, and it took four hours to reach the crash site.

Officers who manned the lifeboats received orders to take all survivors 200 feet from the ship so they were far enough away in the event of electrocution or explosion. However, if they hoped to be rescued, they needed to stay close enough to the Titanic so rescuers could find them.

There were only 20 lifeboats available on the Titanic. A minimum of 48 lifeboats were needed for all passengers to have a spot.

There were a few people who did survive the frigid ocean without lifeboats. The most incredible recorded case was of the chief baker, Charles John Joughin, who survived long enough to be pulled into a boat. Interestingly, when he found out the Titanic was sinking, he poured himself a final drink.

Under normal circumstances, alcohol would accelerate the hypothermia process. However, Joughin claimed it enabled him to remain calm enough to focus on swimming. It helped that he also wore a lifejacket.

Was the Cold Water the Initial Cause of Death?

When the families were contacted regarding the death of their loved ones, investigators said the cause of death was drowning. However, decades of research into the early hours of the accident found those who were unable to be rescued probably died of hypothermia.

Original investigators reported nearly 1,500 drowning deaths, but hypothermia would have set in sooner than they would have run out of energy to swim. Swimming could have kept blood circulating through the body, which would have kept them somewhat warm. However, the cold temperature would have drained their energy quickly and they wouldn’t have survived very long.

There is no doubt that there was a potential for some drowning deaths even without the effects of hypothermia, since we cannot ascertain whether everyone knew how to swim.

The Titanic did contain 3,500 lifebelts and 48 life rings, which was more than adequate for the rest of the crew and passengers. This would reduce the risk of drowning immediately and make it easier to recover any bodies of those who had died.

As the RMS Carpathia rescued those in lifeboats, they left the people remaining in the wreckage for dead. The ship’s authorities had assumed that the remaining people were dead, but some may have survived.

Some doctors believe there was a chance for more people to have survived the incident. Crewmates could have grabbed individuals from the water, and doctors could have done CPR and rewarmed the bodies.

Hypothermic patients aren’t pronounced dead until they warm up to normal core temperatures and do not respond to CPR. There is a chance that the rescue teams didn’t bother pulling people out of the water who were alive with an opportunity to survive.

The rescue mission for the Titanic was one the world had never seen and came with immense stress.

Where Did the Titanic Sink?

The RMS Titanic encountered an iceberg found 400 nautical miles south of Newfoundland, Canada. This area was well-known for icebergs, especially at that time of the year. However, the captain and crew felt the Titanic, touted to be unsinkable, could handle such conditions.

Waters were unusually still during the night the Titanic sank. To further complicate matters, the crewman in the crow’s nest had misplaced his binoculars. In the absence of water breaking the base of the vessel, it was challenging to detect low icebergs near the ship. When he could view it, he immediately reported to the bridge.

While attempting to create a quick turn to avoid the collision, First Officer William Murdock ordered his crew to do a hard-a-starboard and the engine to reverse. Officer Murdoch made the call because Captain Edward Smith had retired for the evening, but unfortunately, it was too late. The starboard side scraped the iceberg, which caused significant damage to the ship.

The iceberg tore through five watertight compartments, weighing down the boat with the incoming water. Some speculated the compartments were not as watertight as initially stated. Further investigations made decades later also noted there may have been an issue with the material used for the rivets.

Results of a Decades-Later Investigation

The investigation into the cause of the sinking of the Titanic revealed that the ship wasn’t agile enough to avoid an iceberg in its direct path. Since it was navigating through waters littered with icebergs, people speculate that many were bumping into the starboard side as the ship proceeded through the seas. As it moved forward, the icebergs could have caused holes in the steel plates, flooding six available compartments.

Seventy years passed before the first remains of the Titanic wreck were discovered. The first steel piece appeared to solve the mystery. The piece shattered when investigators plunged it into ice water and hit it with a hammer, but other testing on larger fragments from the wreckage passed the test.

Looking for further evidence on why the ship sank, they discovered over three million rivets holding the Titanic together could have been faulty. Foecke and McCarty examined 48 rivets from the wreck and discovered high slag concentrations. This smelting residue can weaken the condition of the metal.

Upon researching the archives, they uncovered that ambitious plans to construct three large ships simultaneously had placed a great amount of strain on the shipyard. It was deemed that time pressures, not cost, could have led to using low-quality materials to move things along quicker.

Workers pounded this iron into the Titanic’s stern and bow by hand. They would have needed large machines to pound steel rivets that did not fit. Steel rivets were significantly more robust than iron ones, and these were placed in the ship’s middle, but not in the stern or bow.

Foecke and McCarty hypothesized that the weak iron in the bow popped when the ship collided with the iceberg, opening seams in the hull and hastening the ship’s demise. The flooding didn’t affect the place in the hull where they found steel rivets.

However, Harland and Wolff reject this idea. They point to the Titanic’s sister ship, the Olympic, which used the same material and went without incident for 25 years. The Olympic did survive quite a few significant collisions and was noted to cut a World War I German submarine in half.

Yet, the Olympic and Britannic, made after the Titanic, contained strengthened double hulls in addition to taller bulkheads. They never changed the rivets to steel.

In 2005, after further examination of the wreckage, it was speculated that the ship could have broken at a shallow angle. A closer inspection indicated that tearing was interrupted in the middle. Naval architect Roger Long feels the vessel was still low enough (an estimated 11°) that the stern could regain its buoyancy as it started to crack.

If the ship’s rear was raised from the water at a 45° angle, once the stern tore, nothing could prevent the ship from sinking, resulting in the hull tearing into two pieces.

Why Does It Matter?

For the passengers, this could have meant the difference between life and death. The ship may have only slightly tilted when the bow took on water, giving the passengers a false sense of security. The order to evacuate into lifeboats may not have been taken seriously since the incline was hardly noticeable.

Read Also: How Tall Was the Titanic?

Many guests would never have made it out alive as there were limited lifeboats. Once the bow filled with water, the ship split and sank within minutes.

Titanic survivor testimony appears to confirm this, and no one had noticed a high-angle break. There was no large splash, suction, or tide wave to the surface.

How cold was the water when the Titanic sank? The answer is 28°F. The cold waters were partly responsible for so many deaths as it may have led to hypothermia instead of the reported drowning. Still, some Titanic passengers may have drowned due to being unable to swim. 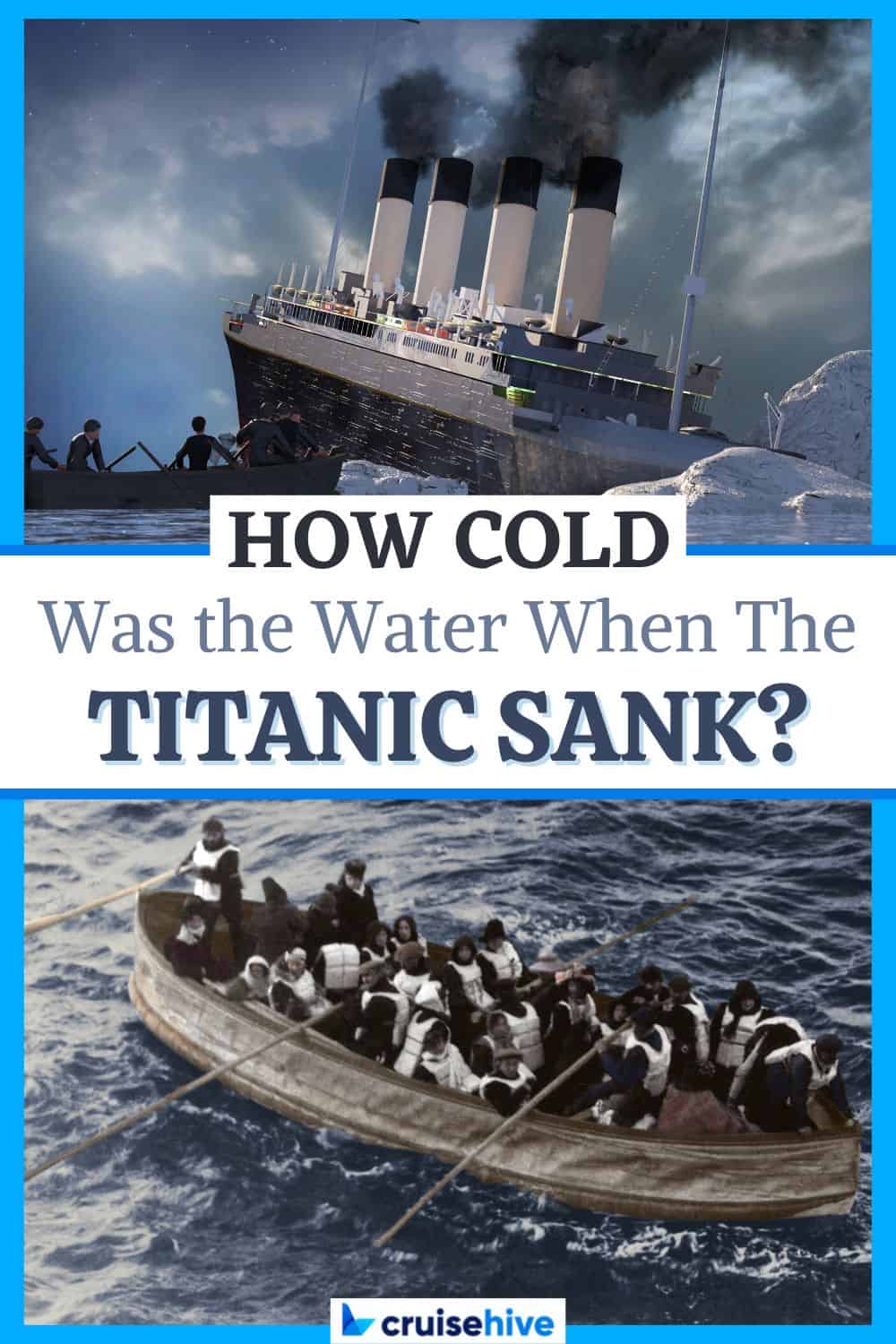