The Former Carnival Cruise Ships, Where Are They Now?

Carnival is one of the largest and most popular cruise lines in the world. More than two dozen ships in its fleet sail 365 days a year all over the world, with new ships always being developed and new itineraries being explored.

Yet even while Carnival Cruise Line adds newer, larger, and more advanced ships to its fleet, older ships are quietly transferred, sold, or scrapped whey they can no longer be sufficiently upgraded or updated for today’s Fun Ship experience. So which vessels are the former Carnival Cruise ships, and where are they now?

Carnival’s very first ship was originally built in 1961 as RMS Empress of Canada for Canadian Pacific Steamships Ltd. In 1972, she was purchased by Carnival Cruise Line and renamed Mardi Gras, serving loyally until 1993. At that time, the ship was sold to Eprotiki Line and renamed Olympic.

Over the years, she was renovated and renamed repeatedly, being called Star of Texas, Lucky Star, and Apollon at different times in her career. In 2000 she was laid up in Greece, and in 2001 reentered service for 3-4 night sailings throughout the Greek Isles. In 2003, the ship was finally sold for scrap.

Built in 1956, this ship was originally RMS Empress of Britain for Canadian Pacific Steamships Ltd. In 1964, she became SS Queen Anna Maria of the Greek Line, and in 1976 she was sold to Carnival and rebranded as the second Fun Ship.

She served as the line’s only ship under the name SS Fiesta Marina, but was sold in 1994 to Epirotiki Line when Fiesta Marina Cruises was discontinued. When she joined Epirotiki Line, she was renamed Olympic, and in 1996, she was transferred to Royal Olympic Cruises.

In 1997, the ship was sold to Thomson Holidays and renamed The Topaz, then in 2008 it became the Peace Boat of Topaz International. In 2008 the ship was laid up, and while it was at anchor it suffered significant damage and was eventually scrapped in India.

Also Read: How to Buy a Cruise on Carnival Cruise Line

Originally built as RMS Transvaal Castle in 1961, this ship had several names with sales and transfers to different lines until it was eventually sold to Carnival Cruise Line in 1977. She was rebranded, updated, and entered service as Festivale in 1978, after being converted from serving primarily as a cargo vessel with only very limited passenger capacity.

In 1998, Festivale was purchased by Premier Cruise Line and became Big Red Boat III. The line, however, went bankrupt in 2000, and the ship had become dilapidated and was not considered worth additional upgrades or renovations. She was sold for scrap in 2003.

The first ship ordered specifically for Carnival Cruise Line, Tropicale was under construction in 1981 and entered service with the fleet in 1982. She was distinctive as the first ship to bear the line’s iconic “whale tale” funnel. In 2001, the ship was transferred to Costa Cruises and renamed Costa Tropicale until 2005, when she was transferred again, this time to P&O Cruises and renamed yet again to become Pacific Star.

In 2008 the ship was sold to Pullmantur Cruises to become Ocean Dream, and in 2012 she was chartered by Peace Boat. She is still in their service today, raising awareness internationally for human rights, sustainability, environmental protection, and other global causes.

Built in 1985, Holiday underwent several major renovations during her service in the Carnival fleet. One of the largest was in 2003 and again in 2005, after she was used as temporary housing for victims of Hurricane Katrina. In November 2009 the ship was officially retired from Carnival Cruise Line and transferred to Ibero Cruises as MS Grand Holiday, receiving a new paint job and entering service with her new parent line in 2010.

In 2014 the ship was sold to Cruise & Maritime Voyages and renamed Magellan, entering her new family in spring 2015 as the line’s flagship. Though she was replaced as flagship in 2017, she is still proudly in service with the line today.

This ship debuted for Carnival Cruise Line in 1986 and served well until 2004, when she was transferred to P&O Cruises Australia and renamed Pacific Sun. At that time, the wings were removed from her iconic funnel and she was repainted.

In the summer of 2012 the ship was sold to the Asian line HNA Cruises and renamed Henna. That line shut down in November 2015, and the former Jubilee was laid up as a buyer was sought. None was found, however, and the ship was scrapped in the spring of 2017.

Built in 1986, this ship was part of the Carnival fleet until 2008 when she was retired to Ibero Cruises and renamed Grand Celebration. In 2014 she was transferred again, this time moving to Costa Cruises to become Costa Celebration.

Before her inaugural voyage with that line, however, she was purchased by Bahamas Paradise Cruise Line and retained her name of Grand Celebration. She kept her iconic funnel, but was repainted. She debuted with that line in early 2015 and is still in service today, sailing two-night cruises to the Bahamas year-round.

Carnival Destiny is relatively unique among Carnival’s former fleet. The ship was launched as Carnival Destiny in 1996. In 2013, she underwent the line’s largest ever refit that renewed nearly every guest area onboard, for a cost of $155 million.

Decks were expanded, more than 150 additional cabins were added, and much of the ship’s layout was altered to incorporate new lounges, bars, and dining venues. Because of the scope of the redesign and renovations, the decision was made to completely rename the ship to Carnival Sunshine.

Today, the ship still sails with the Carnival fleet, but as Carnival Sunshine rather than Carnival Destiny.

What Ships May Become Former Ships Next?

Today, the oldest ships still happily sailing in the Carnival fleet are the Fantasy-class vessels, eight sister ships that were built for the line from 1990-1998. All of them have been updated and feature the line’s new Fun Ship 2.0 upgrades, and they sail a variety of itineraries from different embarkation ports.

With the extensive renovations, these ships have undergone in recent years, plus their unique position capitalizing on shorter itineraries, it is unlikely that any will be retired or transferred in the near future.

Carnival Triumph and Carnival Victory have been scheduled for dramatic changes in the fleet, and will be subject to the same treatment as Carnival Destiny when it was rechristened Carnival Sunshine.

Carnival Triumph is slated to become Carnival Sunrise after its refurbishment in 2019, while Carnival Victory is on the schedule for similar major changes in 2020, when it will be rechristened Carnival Radiance. Of course, plans can always change, and Carnival Cruise Line may yet have other ideas in mind for these and other ships.

The cruise market continues to evolve, however, and Carnival Cruise Line is at the forefront of that evolution as it debuts new itineraries, new features, and new ships for passengers to enjoy. Undoubtedly more ships will be retired in the years to come, but they will always sail merrily on in the memories of the millions of passengers who have enjoyed their long service. 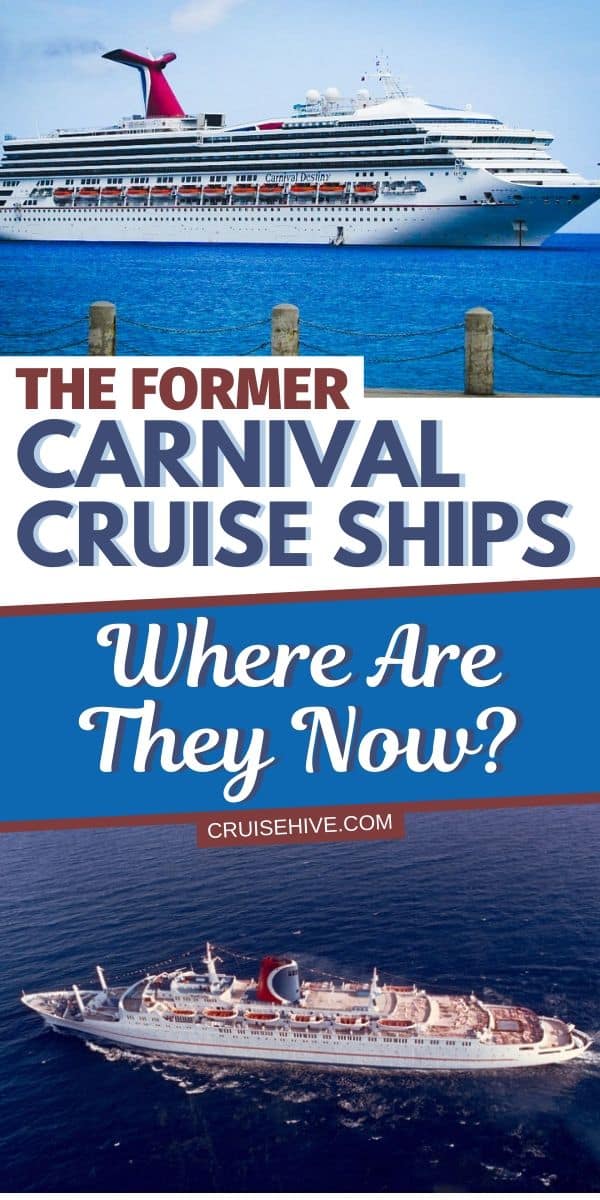 Carnival’s Mardi Gras Cruise Ship: Everything You Need to Know

Carnival Vista Cruise Ship: Overview and Things to Do

17 Things to Do on the Carnival Glory Cruise Ship