The former Carnival Fascination is beached at the Gadani ship-breaking facility in Pakistan to be scrapped. 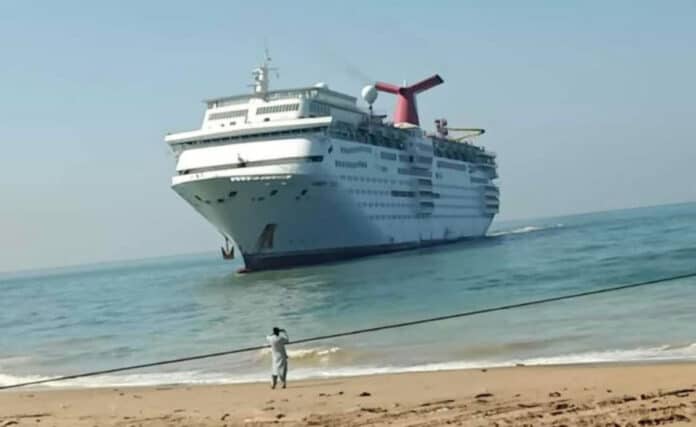 Carnival Fascination, formerly known as Fascination and under her current name Century Harmony, has reached her final destination on a beach in Pakistan. The vessel will be broken up into scrap metal in the upcoming months at the ship-breaking yard in Gadani.

It’s a sad end for the Fantasy-class cruise ship, which, until recently, was due to start a new career sailing in China for Century Cruises. Century Harmony arrived in Pakistan on February 9 and was beached today, February 18.

The beaching of Century Harmony on February 18 means the end of an illustrious career at sea. For 25 years, she sailed the seven seas offering guests fun at sea and many happy memories of vacations at sea. Now, all that awaits her is a few months on a beach in Pakistan, where workers will slowly start stripping her down until there is nothing left.

The Fantasy-class cruise ship is 70,367 gross tons with a guest capacity of over 2,000 and 920 crew members. Built at the Helsinki New Shipyard, she was floated out in 1994. Initially named Fascination, the Carnival prefix was only added later to the Fantasy-class as a part of a Carnival Cruise Line rebranding program.

As Carnival Corporation developed plans to rejuvenate the fleet, it meant the end for the Fantasy class cruise ship. She was laid up in Cadiz, Spain, during the pandemic.

In November 2020, Carnival Fascination was sold to Chinese cruise operator Century Cruises, which renamed her Century Harmony, and intended to use her in addition to the various river vessels the company has sailing the Yangtze River in China. The strict measures in place in China prevented those plans.

Following a short period where the plans changed to make the vessel a floating hotel, she was sold off to a Singaporean trading company which sold her off as scrap metal. She arrived at the Gadani ship-breaking yard on February 9 and was beached today, February 18.

With Carnival Fascination being scrapped, there are only three Fantasy-class ships left of the original eight. Carnival Inspiration, Carnival Imagination, and Carnival Fantasy have all been scrapped during the pandemic.

Carnival Sensation will not be returning to sea, and this week it became clear she is also heading for the scrapyard. She is heading for the shipbreaking yard in Aliaga, Turkey, where the three other Fantasy-class ships have also been scrapped.

All this has to do with the rejuvenation efforts underway at Carnival Corporation. The company wants to be carbon-neutral by 2050 and has started the transition to more effective and more environmentally friendly LNG-powered cruise ships.