Looking Back at the Carnival Fantasy Cruise Ship

We look back at the Carnival Fantasy cruise ship, an iconic vessel for Carnival Cruise Line, and the first in her class delivered in 1990.

Carnival Cruise Line recently retired one of the most iconic ships in its fleet, Carnival Fantasy.  On July 13, 2020, the cruise ship was sold and then, not a month later, on July 29, it was beached in Aliaga, Turkey, where now the ship awaits its fate as scrap, alongside its sister ship, Carnival Inspiration, as well as two former Royal Caribbean cruise ships also at the Aliaga ship breaking facility, Monarch of the Seas and Sovereign of the Seas.

Some speculate that the sale came about due to the 2020 COVID-19 pandemic, in which Carnival was forced to suspend its service on all ships starting March 14. The cruise line had every intention of resuming service by April 10, but of course the suspension was then extended into the fall. However, it’s not fair to blame the sale of the Carnival Fantasy cruise ship entirely on the coronavirus pandemic.

By 2020, Carnival Fantasy had become the oldest cruise ship across Carnival’s entire fleet, at 30 years old, and as any seasoned cruiser knows, when a ship reaches that age, it’s difficult to continue dry docking and updating it in a way that will be profitable.

However, regardless of the reason for Carnival Fantasy’s eventual retirement and sale, there’s no denying that this cruise ship made an impact on the industry.

The Carnival Fantasy cruise ship was floated out on December 9, 1988, but was not completed until 1990, when it left its first home at the Helsinki New Shipyard in Finland.

Compared to much of the newer cruise ships out there today, Carnival Fantasy was on the smaller side, with a gross tonnage of 70,367 GT and a length of 855 feet, with capacity for 2,675 passengers and 920 crew members.

Related: The Former Carnival Cruise Ships, Where Are They Now?

The entire Carnival Fantasy class stood out as being the last cruise ships built with lifeboats on the upper deck only, and recent passengers could even still see some remnants of Carnival’s pre-Fantasy class ship designs, as the Fantasy-class ships featured cabins mostly in the hull and very few balcony cabins and suites, a design choice more similar to what could be seen on the Holiday class of ships, which Carnival had launched in the 1980s.

Primarily serving the Caribbean, Carnival Fantasy operated out of the Port of Miami for the first few years of its life, before relocating to Port Canaveral in 1993. In 2006, Carnival Fantasy was moved to Louisiana and New Orleans, making it the first Carnival cruise ship to return to the region following Hurricane Katrina. At that point, the cruise ship began serving itineraries to Mexico.

In 2008, Carnival Fantasy underwent a much needed dry docking period, before going on in 2009 to operate out of Mobile, Alabama, and then on to Charleston, South Carolina.

Another extensive refit occurred in 2016, at which point the ship returned to Mobile. Most recently, the ship was refitted in 2019 — which, honestly, does seem a bit of a waste, since the ship would be sold just a year later (which, though, does lend some credence to the theory that Carnival wasn’t exactly expecting to retire the ship, but was forced into the decision due to the changing and tumultuous cruising industry influenced by 2020’s coronavirus pandemic).

What’s Next for Carnival Fantasy?

So what happens to a ship when it’s sold and goes on to the ship breaking facility?

After the ship is beached, it’s dismantled, beginning with the interior. All of the furnishings are removed for scrapping and items that can be sold, are. After anything with any monetary value is removed and sold, then the ship is disassembled, cut apart piece by piece. Steel can be sold to scrap metal dealers and then melted and reformed into other products.

What Could Cruisers Expect from a Carnival Fantasy Cruise?

Even in most recent years, some cruisers still preferred Carnival Fantasy to some of the newer ships among Carnival’s fleet, for the simple facts that the ship was on the smaller side, it gave new cruisers an easy and simple introduction to the Carnival brand and there was plenty of classic cruising fun and experiences to be had.

Sure, some of the decor was a little outdated, hearkening back to a 1980s era of cruising, but the experiences made up for that fact (if you even considered it a con in the first place). In fact, many of the cruisers you could see on a Carnival Fantasy cruise were senior citizens who probably were already pretty well familiarized with the world of cruising as it was several decades ago.

In terms of amenities at its sale, Carnival Fantasy offered complimentary dining in two main dining rooms, at a traditional cruise ship buffet and at several dining options that were added during the handful of the ship’s dry-docking periods, including Pizza Pirate, Guy’s Burger Joint and BlueIguana Cantina.

For-a-fee dining simply included a coffee bar and the Chef’s Table experience that you can find on all the other Carnival ships. While this selection might seem extremely limited to cruisers accustomed to 20 or more dining options on a ship at one time, when Carnival Fantasy launched, this range of options was pretty standard.

Similarly, Carnival Fantasy’s entertainment options were pretty par for the course as well, at least compared to other cruise ships from that era. There was a 1,400-person theater and lounge, where you could expect not only shows, but also family-friendly, interactive entertainment (including the HASBRO The Game Show experience, which Carnival added a few years ago, as well as the family-favorited Dr. Seuss experiences). Music-heavy, Vegas-style shows were popular.

Daily fun was, again, more of that classic cruising entertainment led by enthusiastic staff members who encouraged all cruisers to get involved and compete in fun little games around the pool and in the more populated common areas.

As for nighttime fun, the cruise ship didn’t boast the bevy of bars and lounges you might see on some of Carnivals’ newer ships, but there was something to be said for the casinos, karaoke parties and comedy shows. There were actually more bars on the ship than there were restaurants, however, including an Atrium Bar, piano bar, club-style bars and the newer RedFrog Rum Bar and BlueIguana Tequila Bar, among others.

Outdoor fun at the time of the ship’s sale included a WaterWorks water park, one main pool and sun decks, as well as a mini-golf course. Other amenities included your standard spa, gym, shopping and children’s programming.

In terms of cabins, you couldn’t expect the ritziest, latest and best in terms of decor, but things were certainly a blast from the past, with that cheery cruise line combination of oranges, yellows and reds across the carpets, walls, drapes and more.

Of course, as with every cruise ship, the features and amenities that Carnival Fantasy debuted with didn’t hold cruisers’ attention forever. Updates and dry docks were needed to maintain the ship’s appeal, and changes were made until the ship evolved into what was seen right before it retired and made its way to the Aegean Sea.

Some of Carnival Fantasy’s most notable dry docks took place during 2008 and 2015.

In 2008, Carnival Fantasy, as well as all Fantasy-class ships, received refurbishments under Carnival’s Evolutions of Fun initiative. All refurbishments were completed in 2010, to the tune of $250 million.

For Carnival Fantasy, Evolutions of Fun changes included the addition of the new WaterWorks water park, some adults-only areas, a redesigned main pool and a new preteen childcare center for cruisers aged 12 to 14.

At the time, the Evolutions of Fun changes included the addition of the longest water slide at sea to the Fantasy-class ships; the 300-foot-long spiral water slide was part of the Carnival WaterWorks water park. The dry dock also added the Serenity adults-only deck. The ship’s limited number of suites received new wall coverings, bathrooms, carpeting and more.

In 2015-2016, upgrades were made to restaurants and child care areas. This dry docking period was probably Carnival Fantasy’s most significant dry dock in terms of bringing the ship up to modern standards, because it refitted the ship according to the Funship 2.0 standards that Carnival put in place slightly before.

Unlike some of Carnival’s other cruise ships, Carnival Fantasy mostly avoided bad press throughout its long existence.

One of its more notable headlines was made just recently, in 2019, when Carnival sent the ship to the Gulf of Mexico to assist the U.S. Coast Guard in rescuing 23 Cubans traveling in a powerless wooden boat between Cuba and Mexico.

What’s Next for Carnival?

Unfortunately (or maybe, not so unfortunately, depending on how you look at it), the selling of Carnival Fantasy and Carnival Inspiration are just one of many changes that Carnival Cruise Line has recently announced.

Carnival is overall reducing its capacity (possibly in response to reduced demands) and is focusing on its newer ships. This means that, in addition to selling the Carnival Fantasy and Carnival Inspiration cruise ships, other vessels Carnival Fascination and Carnival Imagination are going into a long-term, lay-up status. Other ships will be moving to new ports, and itineraries are being adjusted to meet cruiser demand.

On the positive side of things, though, we will get some new, updated ships as part of all these upcoming changes. A November 2022 delivery date has been set for the yet-to-be-named, second, Excel-class ship, which will join Mardi Gras and feature many of the same exciting amenities, such as the first roller coaster at sea. It’s expected that itineraries for the unnamed ship will go on sale later in 2020.

Additionally and similarly, Carnival Radiance will make its home in Long Beach in spring of 2021, following a $200 million refurbishment in Europe. Anyone who booked a Carnival Imagination or Carnival Inspiration cruise for sailing after 2021 will be re-booked on Carnival Radiance.

What year was the Carnival Fantasy built?

The Carnival Fantasy cruise ship was floated out on December 9, 1988, but was not completed until 1990, when it left its first home at the Helsinki New Shipyard in Finland.

When was the Carnival Fantasy refurbished?

Evolutions of Fun changes included the addition of the new WaterWorks water park, some adults-only areas, a redesigned main pool and a new preteen childcare center for cruisers aged 12 to 14. In 2015, the Funship 2.0 initiative brought in new restaurants and new entertainment across a good portion of Carnival’s fleet

What other cruise ships are the same class as Carnival Fantasy?

When was Carnival Fantasy sold?

Carnival Cruise Line recently retired one of the most iconic ships in its fleet, Carnival Fantasy.  On July 13, 2020, the cruise ship was sold and then, not a month later, on July 29, it was beached in Aliaga, Turkey, where now the ship awaits its fate as scrap, alongside its sister ship, Carnival Inspiration. 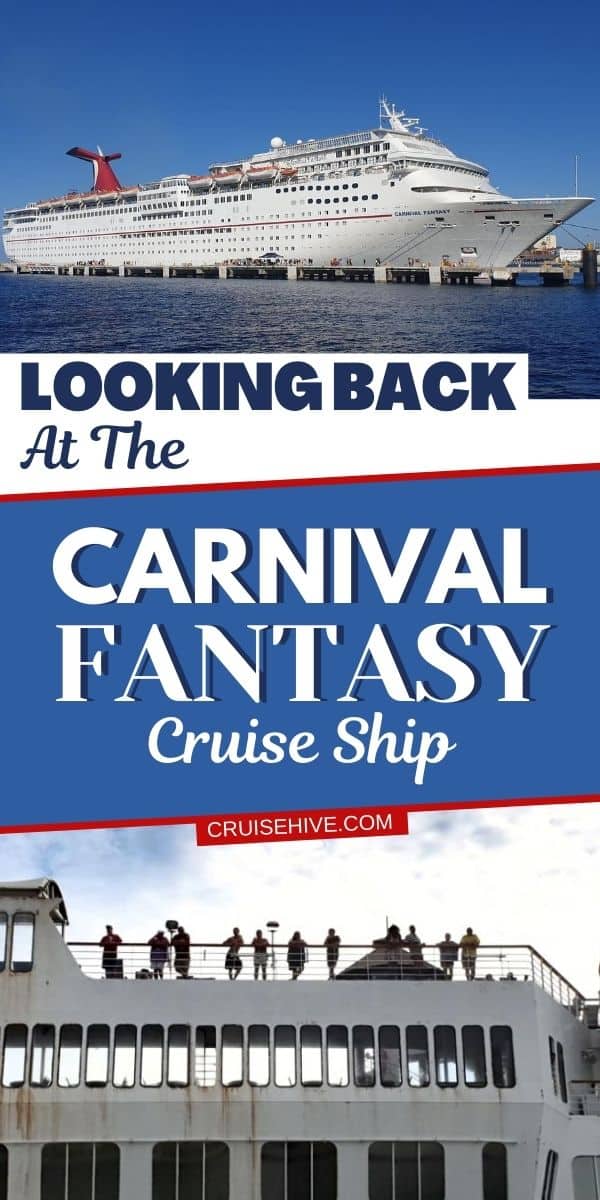