There was a scare on Carnival Dream when a lifeboat apparently broke off and fell into the water while the ship was at sea. Damage was done and the ship had to come to a stop.

One of the lifeboats has fallen from Carnival Dream while the ship was at sea in the Gulf of Mexico on Saturday afternoon heading back to New Orleans. Thankfully no crew members were on board the small boat at the time and it is believed the lifeboat just broke free from the cruise ship.

@CarnivalCruise Dream have lost a lifeboat in the middle of the ocean!! Ship has done a full circle and now ground to a halt! #adrift #breakingnews #cruisedrama #lostatsea pic.twitter.com/xitqnPNaN2

Passengers have been posting on social media of the damaged lifeboat which has a large hole at the front. The Carnival cruise ship turned around and came to a stop. According to the Mum’s Travel Blog, the incident occurred at around 2:00 PM and ship officers could be seen with binoculars having a good look at the lifeboat which had floated away from the ship.

It appears that the bow has a large hole in the upper. #carnivaldream #lifeboat #happeningnow pic.twitter.com/mkKXakwfju

The site went on to mention that the crew launched another lifeboat to go and investigate. There were three crew members and one had a large stick to bring the stricken boat alongside. After at least an hour it was decided to leave the damaged lifeboat at sea as it was impossible to connect and raise back to the Carnival Dream.

Arrangements are being made to replace the life boat on January 6. In the meantime, a contingency plan has been developed and is awaiting approval by the proper authorities. We expect Carnival Dream’s December 30th voyage to operate as planned.

There will be questions about how a lifeboat can simply break off a cruise ship and no doubt an investigation will take place from the cruise line and likely the U.S. Coast Guard. Maritime law does require that cruise ships have enough backup liferafts in case of an emergency and the lifeboats cannot be used. If there ever was an evacuation then the crew would launch extra liferafts to make up for the missing lifeboat.

Also Read: 15 Most Annoying Things People Do on Cruises

The Dream-class vessel did continue on her way towards the homeport in New Orleans, Louisiana where she is arriving today December 30. At the time the lifeboat fell off the Carnival Dream was sailing a 7-night western Caribbean itinerary which included calls in Jamaica, Grand Cayman and the final port of call was at Cozumel, Mexico on December 28.

Carnival Dream joined the fleet in 2009 and is one of the newer ships in the fleet at 130,000 gross tons and with a guest capacity of over 3,600 at double occupancy. The ship completed a major dry dock in February 2017 which added many new features and maintenance was likely done too.

The last time we posted about a similar incident was when a lifeboat broke and fell from a P&O cruise ship in January. In 2017 a lifeboat wire slipped causing it to fall and capsize from a Royal Caribbean cruise ship. 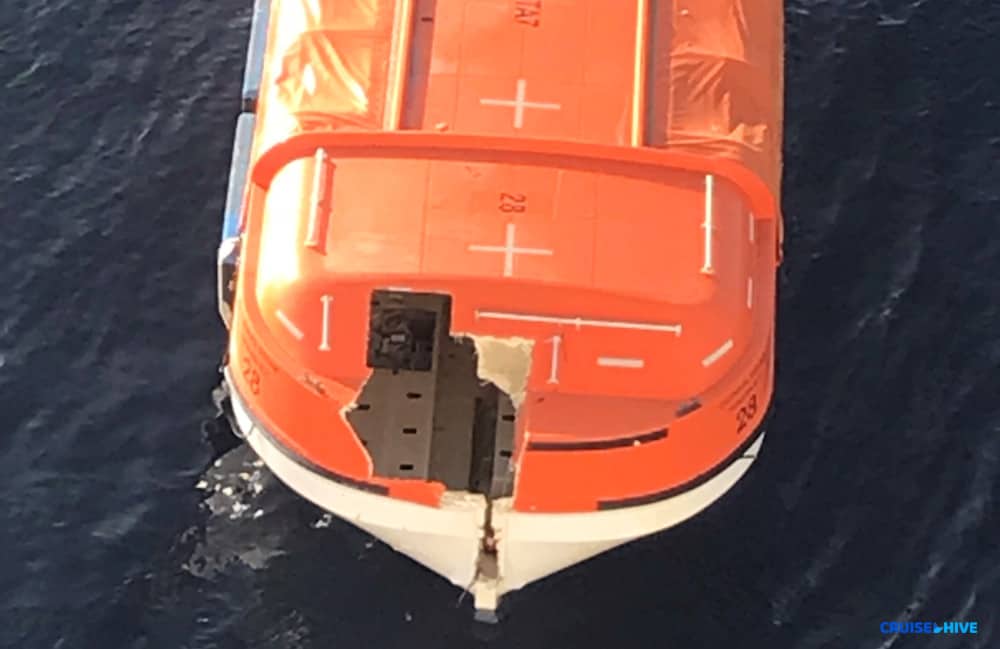