The CDC Director answers questions during a Senate Committee hearing that included questions regarding the Conditional Sailing Order and resuming cruises. 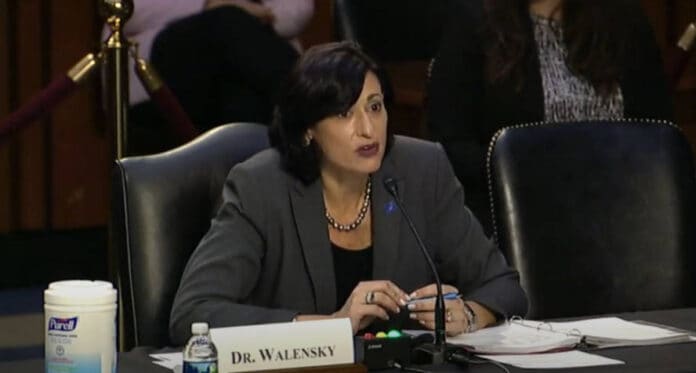 There are some very worrying signs coming from the CDC Director, Dr. Rochelle P. Walensky, after answering questions from an Alaska senator. It now seems it’s not entirely up to the CDC on resuming cruise operations, and they are still working towards phase two of a four-phased plan of return.

There is no doubt that health and safety come first. Still, mixed messages are coming from the CDC regarding resuming cruises during a recent Senate Committee hearing between the CDC director and U.S. Senator Lisa Murkowski.

Resuming Cruises is Not the CDC’s Decision

Resuming cruises in the United States has just become even more worrying and confusing after a recent Senate HELP Committee hearing entitled “Examining Our COVID-19 Response: An Update from Federal Officials” held on March 18, 2021.

It has come across since the pandemic started and cruise lines started suspending operations that it was very much in the CDC’s hands-on when cruises could safely resume.

It seems we’re all wrong after some worrying answers given by the Director of the US Centers for Disease Control & Prevention (CDC), Dr. Rochelle Walensky.

The U.S. Senator for Alaska asked a fundamental question as the state has suffered due to the Conditional Sailing Order and no cruise ship visits for over a year. Senator Murkowski asked:

“Can you give me any kind of guidance to give Alaskans in terms of what we might be able to expect with where this guidance is in the process?

The basis of the question is to provide more of a timeline to Alaskans and those impacted by no cruise ship calls. Those businesses could be facing a second season of no cruise visitors, and the senator was trying to get some more set timeline details on the Conditional Sailings Order. Something which cruise lines and ports has become very frustrated with.

The CDC Director responded with the following the answer:

“We have provided technical assistance on the Conditional Sail where we’ve provided a four-phased strategy for how we could get sail open. We’re in phase 1 of that, moving towards phase 2.”

“This is an inter-agency decision, it is not a decision solely up to the CDC so I would be remiss if I would do that by myself because the decision is not solely up to us.”

The senator then quickly asked if she could provide some timeline on moving to that second phase and the CDC Director answered:

“I can’t simply because I don’t believe it solely in our jurisdiction to address, it’s not necessary the CDC.”

The senator then asked:

“Who else is in the decision-making process beyond CDC?”

The CDC Director then finally said:

The back and forth between the two related to cruises ended with the senator saying she’ll be able to follow up later and that she just needed some sense of timing.

We completely understand the senator’s frustrations, and until now, it was assumed that the CDC was running the show on when cruises could resume. Cruise Line haves already said they continue to wait on the CDC for further technical guidance so that they can prepare for the restart of operations in the U.S.

Dr. Walensky had made it clear it’s not in her hands, and the real power for deciding on resuming cruises is with the Department of Transport and several others, which we don’t know.

You can watch the video footage between the two officials at the senate hearing below:

There are positive signs for resuming cruises coming from everywhere at the moment as the vaccine rollout continues successfully. The UK has already set specific dates on when domestic cruises can return. Many are wondering what about the U.S.

There is no clear answer, there have been rumors that the Biden administration is thinking about limited travel from mid-May. However, nothing officially has been announced.

Meanwhile, cruise lines are starting to lose hope, it seems. We’ve already started seeing a shift to new homeports outside the U.S., such as Royal Caribbean out of the Bahamas and Israel, Celebrity Cruises out of St. Maarten, and Crystal Cruises also out of the Bahamas. Could this be Plan B for the cruise lines? We’ll see in the coming weeks and months.

Cruise Hive will continue to keep readers updated on the situations in the United States on the resumptions of cruise operations. For now, Norwegian Cruise Line has already suspended operations until July, Carnival Cruise Line until June, and Royal Caribbean also until June.