Wonder of the Seas vs. Titanic – A Giant Comparison

Wonder of the Seas vs. Titanic. Both are giants of their time, yet they’re vastly different. We’ll explore each ship’s unique features and compare the differences. 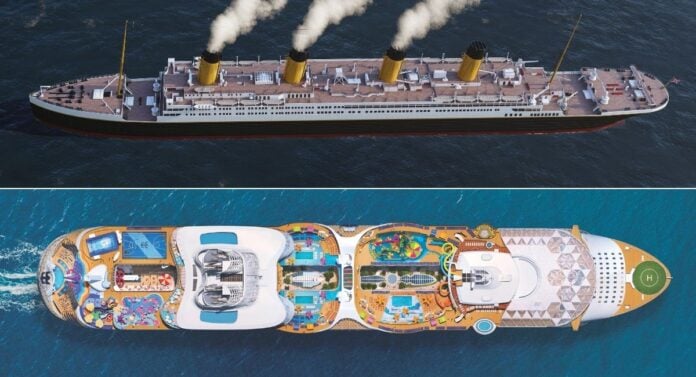 Currently, Royal Caribbean’s Wonder of the Seas is the world’s largest cruise ship, and it is packed with a multitude of activities. With great ships appearing throughout generations, it’s time to cover Wonder of the Seas vs. Titanic. The Titanic is a world-famous ship that was legendary for its generation, yet it is best known today for its tragic demise. So, how do the two vessels compare?

In its day, Titanic was the largest, safest, most luxurious ship ever built, with the reputation of being unsinkable – which tragically proved untrue on the ship’s maiden voyage.

We have learned a great deal since the sinking of Titanic. It was once known as the world’s largest ship, but more than 100 years later Wonder of the Seas has emerged as the most recent ship to take that title. Will this modern Oasis-class Royal Caribbean cruise ship give Titanic a run for its money? How do the two match up against each other?

In this comparison, we will examine both cruise ships. We will compare not just size, but also the accommodations, cost, and facilities of each ship.

Which Vessel Is Larger?

Does size really matter? It does when you are looking at the number of guests and activities. Larger cruise ships can cater to a wider demographic cross-section of individuals. Most passengers on these types of ships are young couples or families. Therefore, they must have a broad appeal in terms of activities.

In a side-by-side comparison:

In terms of safety, Titanic had only 20 lifeboats onboard, which is only enough to evacuate 1,178 people. The ship required double that amount to ensure space for all its passengers. Wonder of the Seas contains 18 lifeboats. While this seems inadequate, these lifeboats can accommodate 370 people per boat, making the total capacity 6,660.

Which Ship Is Faster?

Is Wonder of the Seas Indestructible?

Most people learned from the tragic example of Titanic that no ship is indestructible. It would be foolish to believe otherwise. Thinking that any ship is incapable of sinking can lead to reckless decisions based on overestimating what the ship is capable of withstanding.

Technically, there is the possibility that Wonder of the Seas could sink. The likelihood isn’t high, though, due to the security measures put in place to ensure the safety of those on board. Technology has considerably advanced since the sinking of Titanic to ensure that the safety of passengers and crew members. Safety is always the top priority.

Weather may attempt or even succeed in capsizing the ship, resulting in its sinking. However, the ship is designed to sink slowly so guests and crew have time to escape. Also, learning from Titanic’s example, all cruise ships are equipped with enough lifeboats to accommodate every passenger on the modern cruise ship.

While it almost seems unfair to compare rooms, if put in its proper context, we can use that to examine the luxury contained within the two ships. Titanic’s best suites were Deluxe Parlor Suites. These suites contained two oversized bedrooms, a private bathroom, dual walk-in wardrobes, and a spacious sitting room with writing desks and a false fireplace.

The look of the suites was very opulent for the times, with four-poster beds elaborately decorated with thick drapes, wood wainscots, and ornate decorations. Third-class rooms weren’t as spacious, as only bunk beds and shared bathrooms were present. This deck only had two bathtubs to serve 710 passengers.

However, most guests felt like royalty to even be aboard such a magnificent ship on its maiden voyage. Accommodations mattered less than the simple privilege of being there if you were in third class.

This is an example of luxury at the time. How does it compare to our present-day image of opulence?

Fast-forward over 100 years, and the look of a suite has drastically changed. When going aboard a cruise ship, it is less about making a statement than it is about having fun.

Wonder of the Seas’ best room is the Ultimate Family Suite. It has a private game room, an air hockey table, table tennis, and a private jacuzzi on the balcony. If that isn’t enough, there is a slide that goes from the bedrooms to the living area. The rooms are bright, colorful, and are designed with comfort and fun in mind.

Staterooms and cabins on this cruise ship contain modern standards expected on a cruise ship. Wonder of the Seas has 34 categories of cabins available, ranging from inside rooms with no windows to large rooms capable of sleeping 14 people.

On Titanic, bedding was changed daily. This was done despite the fact that there was not a laundry room aboard the ship because of limited supplies of freshwater. Interestingly, Royal Caribbean changes bed linens during the cruise but how frequently depends on the length of sailing and guests’ preferences.

While the size of the two ships is impressive, we must also compare the activities on board each ship. It is a wonderful way to illustrate the progression of cruise ships over the past century.

As expected, there were fewer activities available on Titanic. At the time, Titanic was impressive because it had many activities that other ships did not include. Passengers were able to listen to live music, exercise in a gym or play squash, trade tales in the smoking room, and read in the library.

Wonder of the Seas was designed for activities for the entire family. It is known for treating kids like royalty, which would never have been considered on Titanic, which had no youth facilities at all.

Titanic’s gyms contained rowing machines, punching bags, exercise bikes, an electric horse, and two electric camels. Wonder of the Seas contains a variety of exercise machines and weights, yet no electric animals are available on board. However, many ships do have outdoor tracks and sports that guests can play outdoors.

Titanic boasted a prestigious 30’ long squash court, which allowed passengers to play racquet sports. The promenade deck allowed people to engage in dominoes, shuffleboard, and a cerebral game of chess.

Wonder of the Seas contains a sports court designed for volleyball and basketball. Throughout the ship, there are areas for rock climbing, mini golf, surfing, zip lining, ice skating, and laser tag. Guests can even take in a fitness class or go swimming in the solarium. The list seems very impressive in comparison, as do the differences in popular activities of the times.

Everyone loves to lounge by a pool or take a quick, relaxing dip to cool off on a hot day. Titanic’s swimming pool was only available to first-class passengers, and there was only one available.

In comparison, Wonder of the Seas has three water slides (Ultimate Abyss, The Perfect Storm, and SplashAway Bay), 10 hot tubs, and four swimming pools available to everyone.

The preferred method for relaxation on Titanic was a Turkish bath, tanning bed, steam room, trips to the barber, and massages. Fast-forward to the present, and guests can enjoy heated stone loungers, fog showers, and saunas on the Wonder of the Seas.

Furthermore, many of these activities were only available to men aboard Titanic. Now, both genders can enjoy relaxation methods incorporated today.

Wonder of the Seas contains 21 restaurants guests can select from, including nine complementary venues, three main dining areas, and 11 specialty dining places. The decor depends on the flavor and type of cuisine being served.

When you consider dining options, the two menus and restaurant varieties cannot compare. Titanic had a very scaled-back menu when compared to today’s standards, whereas most modern cruise ships have a variety of culinary delights on board.

However, when you compare what was on the menu, the items on Titanic would be considered more fine dining. However, many of us would not consider eating a lot of these delicacies anymore.

Titanic cost $7.5 million to create, or $200 million today. Meanwhile, Wonder of the Seas cost $1.35 billion to build, which is over six times the price of Titanic.

If you were to book the Ultimate Family Suite over Christmas break on Wonder of the Seas, it would cost you $85,000. It is cheaper when compared to first-class suites on Titanic. The cost to stay in these suites was upward of £870, or $100,000 using today’s currency. The cost of tickets per class was as follows between Titanic and Wonder of the Seas:

These prices offer a generalization on what to expect. Actual ticket fares depend on season, length of trip, destinations, and the ship’s popularity.

Comparing these two luxury liners reminds us about how much time has changed society. Once, it was all about the destination and reaching it quicker. Traveling by boat was the main method of transportation, which has now been replaced by air travel.

Read Also: Titanic vs. Modern Cruise Ship – How Do They Compare?

With Wonder of the Seas vs. Titanic, you really can’t define whether one ship is superior to the other. They were both the best of their generation. What becomes evident in their comparison is what aspects of luxury are now emphasized, the advancements in technology, and the demographics that are drawn to cruise line travel.

Both ships are glorious for their time. While Wonder of the Seas may not be considered as elegant or opulent by today’s standards as Titanic was in her time, it does attract a lot of attention from families who want to engage on an exciting cruise.