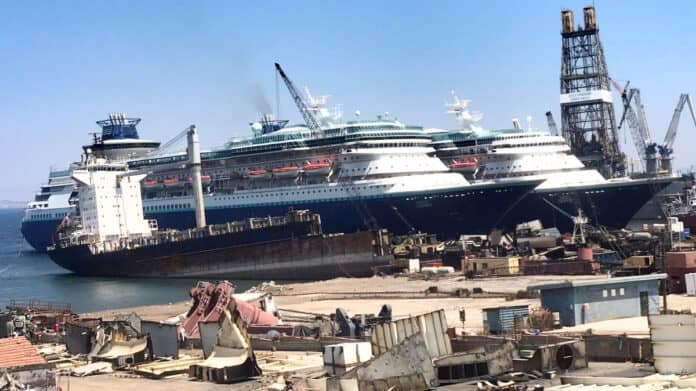 Sovereign and Monarch Reach End of the Line

As seen in the above photo by Nautica Goods, two cruise ships that have been covered a lot recently since operator Pullmantur Cruises went out of business have now reached the end of the line at the Aliaga ship breaking facility in Turkey.

Monarch which is formerly known as Monarch of the Seas was beached yesterday at Aliaga which is just north of Izmir in Turkey. The last remaining crew members apart from essentials were already transferred to Celerity Infinity. The crew will be taken on by Royal Caribbean which is some good news. Valueble items and equipment was already removed when the ship was docked in Naples recently,

Video footage has been capture of the moment the Monarch was beached and the final time the engine will be used as she’ll be taken apart bit by bit. A sad ending for a vessel which such a long history which those who love cruise ships will appreciate.

This morning sister ship Sovereign which is also formally known as Sovereign of the Seas was beached too. The ship will now await scrapping after already being stripped of important items in Naples, Italy recently. The crew were already transferred to the Celebrity Constellation cruise ship on July 20.

Another vessel which was part of the Pullmantur fleet named Horizon is just one step behind and also set to be scrapped. The ship is current off the Greek coast after being stripped of all important items. The ship will soon join Monarch and Sovereign on the beach at Aliaga.

As Cruise Hive previously reported, Pullmantur was forced to close its business due to the impact of the suspension of operations. The Spanish cruise line was no longer able to continue and Royal Caribbean partly owned the operator and took back control of the fleet before selling the ships for scrap.

A lot of memories for many cruisers on these ships. Sovereign of the Seas was first in her class and at the time she entered service in 1987 was the new mega-ship of the industry. The vessel was constructed at the Chantiers de l’Atlantique in France and is over 73,500 gross tons with a passenger capacity of over over 2,800 at double occupancy

Monarch of the Seas was the second in the Sovereign-class for Royal Caribbean and was also built at the Chantiers de l’Atlantique shipyard. The ship debuted in 1991 and is over 73,900 gross tons with a guest capacity of over 2,700.