Here's everything you need to know about the Galveston cruise terminal before you head for your cruise vacation from the port.

The Galveston Cruise Terminals are a popular departure point for cruises, and there are many reasons why. It’s easy to reach from major cities including Houston, Austin and Dallas as well as most southern states. The port is less than 45 minutes from the open sea.

Galveston’s increase in popularity has led to ambitious plans for development of a third state-of-the-art cruise terminal. With so much to offer, cruisers should definitely consider the benefits of sailing out of Galveston cruise terminal on their next voyage.

To make is super-easy, we’ve done the research to provide you with the latest information relating to Galveston cruise terminals. If you want to know how to get there, what services are available, where to park (and how much it costs!) we’ve got it covered. We even include the newest updates on future development at Galveston cruise terminal 3, so read on and we’ll answer all your questions…

Port of Galveston covers 840 acres and serves cargo, cruise and commercial shipping operations. It has been in business since 1825, when Texas was part of Mexico, and remains one of the oldest ports in the Gulf of Mexico. It is now the 4th busiest cruise port in North America, serving over 1.7 million cruisers in 2018.

This busy port currently has two cruise terminals with a third one under construction. Read full details in the sections below.

2. Where is the Port Located?

Located on the Gulf Coast of Texas, the Port of Galveston operates from Galveston Island, an offshore barrier island. The port is on the sheltered side of the island in Galveston Bay/West Bay, at the start of the Houston Ship Channel.

Galveston cruise terminal is at the east end of the 27-mile long barrier island which is connected to the mainland via the I-45 and the San Luis Pass toll bridge.

Port of Galveston has two cruise terminals between Piers 23 and 28. Both terminals have 2000-foot berths to accommodate larger cruise ships to a depth of 30 feet. The terminals cover an area 220,000 sq.ft and include onsite cruise parking on open parking lots and in a parking garage. A third terminal is currently under construction, due for completion Fall 2022.

3. Getting to Galveston Cruise Terminal

From the North and West

The closest airport to Galveston Island is William P. Hobby (HOU) Airport, 41 miles northwest of the cruise port. From there you can rent a car and drive 45 minutes to the port via Hwy 45. However, it is much cheaper and more convenient to drive your own vehicle to Galveston and then use cruise parking, or book a hotel package that includes free cruise parking.

Related: How to Travel from Houston to Galveston Cruise Port

In 2021, three major cruise lines have ships using Port of Galveston as their home port. More ships are likely to be based there once the third cruise terminal is fully operational. Currently, Galveston is home port to Carnival Cruise Lines, Royal Caribbean (RCL) and Disney cruise ships.

Cruise ships Carnival Breeze, Carnival Dream and Disney Wonder operate out of both Terminals 1 and 2. Galveston cruise terminals are well-positioned for offering 4/5 night and 7-night cruises in both the Eastern and Western Caribbean.

Carnival also offers cruises to the Bahamas/Eastern Caribbean, stopping at Key West, Princess Cays, Freeport and Nassau. It just shows what a variety of cruises sail from Galveston cruise terminals!

Terminal 1 is located at 2502 Harborside Drive, Galveston and is located east of Terminal 2. It primarily serves Carnival Cruise Lines with parking right across the street. This Galveston cruise terminal was expanded and improved in 2010.

Terminal 2 is located at 2702 Harborside Drive, Galveston. It is mainly used by Royal Caribbean although this will change in late 2022 when the new RCL Terminal 3 opens. It is within walking distance of the terminal and parking and there is a shuttle service.

Terminal 2 was expanded in 2016 to accommodate Royal Caribbean’s larger Freedom-class ships. The 150,000 sq. ft. facility can accommodate up to 5,000 passengers and allows for simultaneous handling of passengers embarking and disembarking.

In December 2018, Royal Caribbean signed an agreement with Port of Galveston to build a third cruise terminal on Galveston Island. This will enable them to accommodate many more passengers and cruise ships, which will also bring the port more revenue.

Plans for the Galveston cruise terminal are for a new 200,000 sq. ft. complex on 10 acres of land at Pier 10. It is on the southern side of the port, just east of the existing terminals.

The new Terminal 3 is scheduled for completion in late 2022 after being delayed by Covid. It will accommodate the largest Oasis-class cruise ships which carry over 5,000 passengers. The new terminal is expected to double the number of cruises and passengers using Galveston cruise terminals each year.

Royal Caribbean will build the 161,300ft² terminal and then lease it from the port for the initial period of 20 years with four ten-year options. The port will also build and operate a new 1800 space parking lot, as well as bus and taxi areas.

The project has an estimated cost of $125 million and will provide a state-of-the-art cruise terminal in Galveston. It will be the home port for Royal Caribbean’s Allure of the Seas, which will sail on 7-night Western Caribbean itineraries starting November 2022.

This expansion is anticipated to create 800 new jobs and will net the Port of Galveston $1.4 billion in local business revenue as well as contributing $5.6 million in state and local taxes.

The new Galveston cruise terminal will be developed in line with the global Leadership in Energy and Environmental (LEED) health, efficiency and eco-sustainable standards. It proposes the use of liquefied natural gas (LNG) as a marine fuel for all cruise ships and other vessels calling on the port. LNG is much more eco-friendly than diesel and is less harmful to the environment.

One feature that will be part of the high-tech new terminal is facial recognition technology. This will make security checks much quicker and easier than before. There will also be mobile check-in, reducing the long queues that are commonly associated with the cruise boarding process.

Onsite cruise parking serves cruise terminals 1 and 2 at Port of Galveston. Parking is much more affordable than other cruise ports such as Miami and is charged at a rate per day. Expect to pay around $95 for 7 days cruise parking onsite when you pre-book.

Worth Reading: Extensive Guide to Port of Galveston Cruise Parking

The covered parking garage is a little more expensive at $120 for 7 days. The Express Lot and SMP Lot are a short walk from the cruise terminals while Lots A, B and C are Park and Ride.

Other cruise parking options include private companies which have off-site parking with complimentary cruise shuttle service. Prices are around $70-85 for 7 days parking with companies such as CruisePark.com, Discount Cruise Parking (DCP) and EZ Cruise. A shuttle transports cruisers and their luggage right to the ship.

Those staying in a hotel overnight before or after their cruise will find the best value is a Stay, Park and Cruise package. These include overnight accommodation, cruise parking and a shuttle to/from Galveston cruise terminal for one fixed price.

Cruise parking at the Port includes ADA Handicapped parking spaces. However, all cruise parking is on a first-come, first-serve basis, so make sure to book ahead of time to be sure of a space.

Tips for Luggage and Passenger Drop-off

On cruise day, the port recommends driving directly to the terminal to drop-off passengers and luggage. Porters will be there to help direct your group and take your luggage aboard while the driver parks the vehicle and hops aboard the shuttle for the return trip back to the ship.

Be sure to keep in mind that not every cruise company allows early check-in, so pay attention to the details of your trip. If you’re traveling via Carnival, they use a staggered check-in method and will give you a specific 30-minute window for checking in and boarding the ship. If you arrive too early, they’ll turn you away.

9. What to Do Near the Galveston Cruise Terminals

If you have time to spare, Port of Galveston has some interesting attractions and things to do.

Built specifically to cater to tourists and cruise passengers visiting Galveston, the Window on the Waterfront has a collection of attractions close to the cruise port.

Along with various restaurants and shops, the Window on the Waterfront houses many attractions that may interest cruise visitors. These include the following:

The Elissa is a 141-foot long sailing ship built in 1877 and now docked at Pier 21 as a maritime museum attraction. You can tour her decks and imagine life as a sailor in the 19th century.

Also Read: Things to Do in Galveston, TX for Cruise Visitors

Built by Henry Fowler-Watt, the Elissa was named after a Phoenician princess in the epic Roman poem the Aeneid. After a long life as a cargo vessel, she was brought to Galveston to be restored. Better than a replica, this fully-functional vessel has survived for well over a century and is a popular and interesting attraction.

Also at Pier 21, you’ll find several theaters and art galleries. Pier 21 Theater offers three movies about various points in history for Galveston Island. These include “The Great Storm” about the hurricane that hit Galveston in 1900; “The Pirate Island of Jean Laffite” and “Galveston – Gateway on the Gulf”, a movie about the immigrants who came to Galveston. It’s a great place to visit if you have a few hours to spare.

Right next to the Elissa, the Texas Seaport Museum is packed with local history about the ships and 133,000 immigrants that entered through Galveston to make a new life for themselves between 1840 and 1920. Many Americans have family connections with this port. You can browse the Galveston Immigration Database for any ancestors, if you wish.

The entrance to the Ocean Star Drilling Rig Museum is at the east end of Pier 21. Ranked as one of Galveston’s top attractions, it offers insight into oil rigs, offshore drilling and exploration, seismology, and much more. It’s definitely something unique to do near Galveston cruise terminals.

With so much going on, cruisers should definitely consider Galveston cruise terminals for their next cruise departure.

How many cruise terminals are at the Port of Galveston?

Port of Galveston currently has two cruise terminals with a third one under construction. It is due for completion in late 2022.

Which cruise terminal does Carnival use?

Carnival Cruises generally use Galveston Terminal 1. However, some sailings with Carnival Breeze and Carnival Dream use Terminal 2.

Which cruise terminal does Royal Caribbean use?

Royal Caribbean currently uses Terminal 2 in Galveston Port. However, once the new Terminal 3 is completed, they will be using the new state-of-the-art Terminal 3. 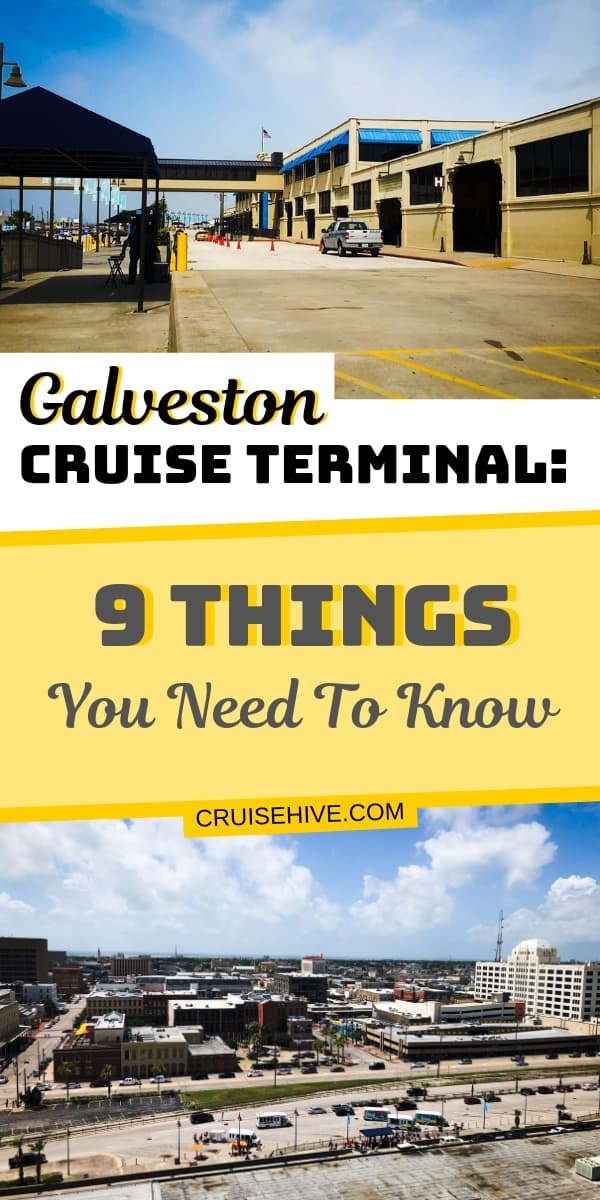