Former Costa Cruise Ship is Beached for Scrapping in Pakistan

Former Costa cruise ship is beached at the Gadani ship-breaking facility in Pakistan for scrapping over the coming weeks and months. 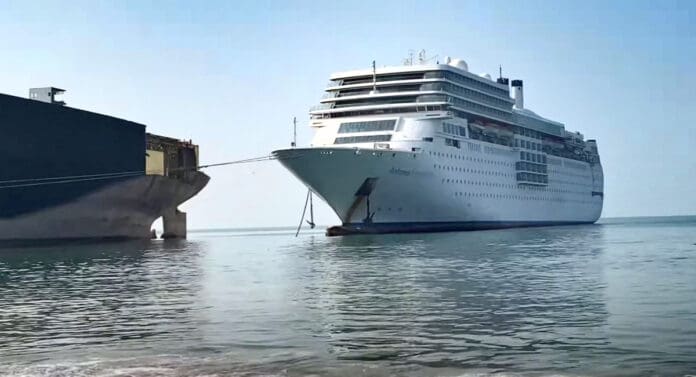 2020 and 2021 have not been good years for cruise ships showing their age. Many cruise ships from Carnival Corporation and Royal Caribbean have been scrapped in the past two years, and we can now add one more to that list.

Early last year, it became clear that Costa Cruises would be either selling or scrapping Costa neoRomantica. What seemed a lucky break for what was the oldest ship in the Costa Cruises fleet, the vessel was sold to Celestyal Cruises in July of 2020. Based in Cyprus and operating cruises around the Greek Islands primarily, the small cruise line purchased the vessel and renamed her Celestyal Experience.

Celestyal had big plans for the vessel and even intended to use her as the company’s newest flagship vessel. However, she was never to sail for Celestyal Cruises. Since July of last year, the vessel had been laid up in Piraeus, the port city close to Athens in Greece.

Celestyal would never bring the vessel back into guest service; instead, she was sold to a company called Beacon & Bay Shipping Services. This company purchased the vessel, renamed her Antares Experience, and reflagged it to Liberia. The company intended to use her as a hotel ship or to be sold further.

Besides all the well-laid plans, the ship set a course to the Gadani ship-breaking yard in Pakistan for scrapping in November 2021. The ship was beached on December 3rd. With steel prices setting all-time highs, scrapping a vessel is currently a more economical choice than keeping it laid up.

Built in 1993, the 56,700-gross ton Costa Romantica sailed for many years around the world; her maiden voyage was in November, 1993. The 1800-passenger cruise ship underwent extensive renovations and remodeling in 2012, to the tune of €90 million.

The upgrade added additional cabins on the top decks and balconies and extensive modernization inside the vessel. During this time, Costa Cruises also took the opportunity to rename the vessel Costa neoRomantica.

After sailing for many years in Europe and South America, in 2017, Costa neoRomantica was assigned to sail cruises for the Asian market from Hong Kong and China. However, with cruises being halted from China in February of last year, the end of Costa neoRomatica was near. When Costa Cruises did sell off the vessel, she was the oldest vessel in the Costa Cruises fleet.

During the pandemic, Carnival Corporation took it upon itself to modernize its fleet extensively. To achieve that, the company offloaded 20 cruise ships across most of its brands, including Carnival Cruise Line, Princess, Holland America, P&O, P&O Australia, and Costa. The only cruise lines that did not lose any vessels are those with relatively modern fleets; Seabourn Cruise Line, Cunard, and AIDA.