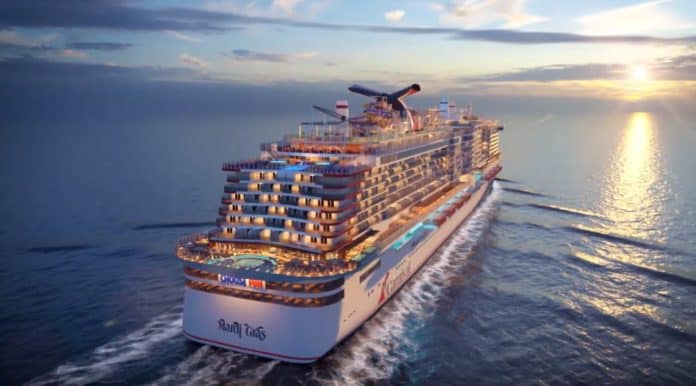 Carnival Cruise Line has revealed that the new Mardi Gras cruise ship won’t be arriving until February 2021, and all of the ship’s cruises until then are cancelled.

The Miami-based cruise line has revealed and confirmed much speculation that the new Mardi Gras cruise ship has been delayed. The largest-ever cruise ship to be constructed for Carnival now won’t be arriving until February 2021.

The ship, which is the first in the fleet powered by Liquefied Natural Gas (LNG), will debut out of Port Canaveral on February 6, 2021. That means all previously planned cruises from November 14, 2020 to January 30, 2021 are cancelled.

“While we had hoped to make up construction time on Mardi Gras over the summer, it’s clear we will need extra time to complete this magnificent ship.  We share our guests’ disappointment and appreciate their patience as we work through this unprecedented time in our business and the lives of so many people.  We remain committed to working with government, public health and industry officials to support the response to the pandemic and to return to operations when the time is right.”

The cruise line has already started to send out communications to those guests impacted by the cancelled sailings. Compensation is being offered in the form of a 100% Future Cruise Credit along with $600 of onboard credit per stateroom if a new cruise is booked by May 31, 2021. Cruise Hive readers can read the full communication from Carnival below:

This news comes as no surprise as Carnival has already said in the last few weeks that new cruise ship deliveries will need to be delayed. This also applies to other new ships for sister brands, including the new P&O Iona for P&O Cruises in the UK.

Mardi Gras is currently in the final stages of construction at the Meyer Turku shipyard in Finland. The yard has been hit by the global crisis, which has resulted in work being delayed on the vessel. The suspension of cruise operations has also not helped and cruise lines are struggling to come up with funds to keep the business going.

It’s pretty bad news for those guests who were looking forward to enjoying one of the most advanced and newest ships in the world. Mardi Gras features the world’s first roller coaster at sea, which has been much anticipated along with many new onboard spaces and experiences.

Some guests have been hit even harder after they re-booked the Mardi Gras for a second time before next year. This is because the ship has already been delayed once due to the complex construction of the ship.

She was originally scheduled to debut on August 31, 2020, out of Copenhagen. The date was then pushed back to debut out of Port Canaveral on November 14, 2020. Let’s hope the further delay will be the last and cruisers can enjoy the new mega-ship next year.