Carnival Cruise Line Not Moving Ships Away From the U.S.

Carnival Cruise Line President says no plans on moving ships away from the U.S., no decision on vaccines, and no decision on June sailings in a new video message update. 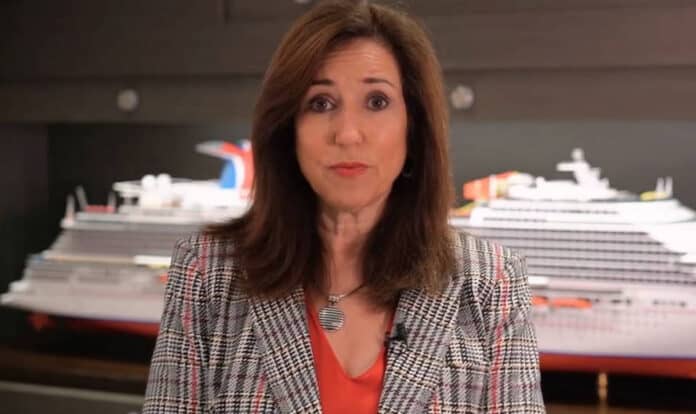 Following the new developments between the cruise industry in the U.S. and the CDC, Carnival Cruise Line President has released a new update.

In the new video message, she covers that Carnival has no plans to move ships away from the U.S., no decision yet made on June sailings, no decision on vaccines, and revised dates on cruise cancellations.

It comes after many cruisers were worried that cruises had been canceled until November 1, 2021, due to a CDC statement released on March 25. The Carnival Cruise Line president has cleared things up with this latest update.

No Decision from Carnival and Clarification

The Cruise Lines International Association urged the U.S. Centers for Disease Control & Prevention to lift its Conditional Sailing Order in a statement released on Wednesday. The trade organization, which 95% of the world’s cruise lines are a member of, including Carnival, said that cruise lines are ready to resume operations and that the CDC should allow cruises from the U.S. by July.

The CDC responded and released a statement not long after and the agency remains firm on the current Conditional Sailing Order which is in place until November 1, 2021.

There was a lot of confusion following the day’s developments as many thought that cruises in the U.S. were now suspended through October 31, 2021. In fact, that’s not the case, and that just when the order is set to come to an end of the CDC director decided to rescind the order.

In a new video message released on Thursday afternoon. Carnival Cruise Line president Christine Duffy has made it clear that Carnival has not suspended its operations through June.

She also said that Carnival remains very encouraged by the vaccine rollout and that they are an important tool along with several health protocols. No decision had yet been made on the vaccine being a requirement. This has also been backed up recently by Carnival’s Brand Ambassador, John Heald.

You can watch the full video message below:

No Plan on Moving Ships From U.S.

Duffy went on to talk about ship deployments as other cruise lines such as Royal Caribbean and Celebrity Cruises announced new homeports outside the U.S. including the Bahamas, St. Maarten, and more recently, Cyprus. These sailings are set to start in June. Still, Carnival Cruise Line has no plans on following its rival.

In recent weeks we’ve started seeing Royal Caribbean Group develop plan b as the CDC has not yet released any technical details for its four-phased framework. In fact, the CDC director recently confirmed in a Senate hearing that they were still in the first phase.

She also mentioned that Carnival sails more families than any other cruise line. With the vaccine only for adults at the moment, that would have an impact and limit those allowed to sail with Carnival if a vaccine mandate was issued.

Also Read: Which Cruise Lines Have a COVID Vaccine Requirement?

Duffy remains optimistic that travel will reopen in time for Summer, which would be the same for cruises. So it seems Carnival Cruise Line is holding back and waiting in the hope of a summer return from the U.S. the cruise line has currently suspended operations in the U.S. through May 2021.

Duffy mentioned that anyone currently on a June sailing will be able to cancel with no penalty. There is a revised final payment for those who are booked for June and guests have received a more detailed communication on this.

So the final payment deadlines for all June sailings are now moved to April 30, 2021. This lets guests who have not yet made their full payment, to wait until Carnival has made a decision on if June sailings will be canceled or not.

If guests decided to keep their booking and the voyage does actually go ahead then they will receive a $100 onboard credit. guests can also cancel at any time until April 30, 2021 with no penalty.