We’re now well underway for 2019 but just before we begin looking forward let’s take a look back at 2018. Carnival Cruise Line dominated our fifth annual Cruise Ship Awards for 2018 which we recently announced the winners for.

The Miami-based cruise line has had an eventful 2019 so far and it hasn’t all been so good but let’s forget about that and look at the categories Carnival won.

We opened the 2018 Cruise Ship Awards at the beginning of September 2018 with a total of nine categories. The awards which have run for the past five years are heavily focused on the actual cruise ships but from time to time we add in a different category to mix it up.

Carnival Cruise Line received more votes than the nine other cruise lines for the best cruise line category. It has been the first time we’ve done this category and makes sense to see which one Cruise Hive readers prefer to cruise with.

It was a busy 2018 for Carnival with the debut of Carnival Horizon in the Spring and some major cruise deployment changes.

Most Anticipated New Cruise Ship for 2019

Carnival Panorama has been voted as the most anticipated new cruise ship for 2019. This will be the third Vista-class vessel and again Carnival will be introducing something new to the fleet which is the first Sky Zone trampoline park at sea.

The ship which is arriving in December 2019 will be based on the U.S. west coast out of the renovated Long Beach terminal. The ship was against seven others including Norwegian Encore which came in second and Spectrum of the Seas in third.

And the most anticipated future cruise ship went to the Mardi Gras! Not the original ship in 1972 but the fully powered LNG one which is coming in 2020. It will the largest ever built for the cruise line and is going to take Carnival into a new era of cruising.

It comes as no surprise that Mardi Gras received more votes than five other ships. The ship will be huge at 180,000 gross tons and feature the world’s first roller coaster at sea. In second place came Scarlet Lady which will enter service as the first Virgin Voyages cruise ship in 2020 and in third came the unnamed Leonardo-class ship from NCL.

The best new cruise ship for 2018 went to Carnival Horizon which is the second Vista-class ship. Many cruisers had been excited to see the new dedicated Guy Fieri BBQ venue and the first Teppanyaki restaurant in the fleet.

With the ship being based out of New York and Miami in 2018 it sure has had a lot of attention! The ship came out on top over six other ships including Symphony of the Seas in second and Celebrity Edge in third.

The best cruise ship dining venue went to Guy’s Pig & Anchor Bar-B-Que Smokehouse|Brewhouse which featured on Carnival Horizon. This is the first dedicated venue in the fleet which features a full bar and seating locations. It’s all backed with exclusively brewed beer from onboard.

The venue was up against six other dining spaces from five different cruise lines. In second place came Cagney’s Steakhouse featured on Norwegian Cruise Line and in third was Giovanni’s Table on Royal Caribbean. The category was mainly for dining venues which aren’t included in the cruise fare.

The first category result we announced in December was the best cruise ship feature. The SkyRide which is featured on the Vista class vessel won for the third year in a row! Those Cruise Hive readers who have cruised on Carnival Vista and Carnival Horizon are really liking SkyRide which was first introduced in 2016.

The feature is located on the top deck and raised above. Guests can peddle against each other around the SkyRide or simply go at any speed. It is 800 feet long and offers stunning ocean views. It is also included in the cruise fare with no added cost.

SkyRide was up against three other features from different cruise lines. In second the hugely popular Race Track at Sea which is so far on two Breakway-plus class ships from Norwegian Cruise Line. In third came the 10-story high Ultimate Abyss slide found on Symphony of the Seas and Harmony of the Seas.

It has been a great Cruise Ship Awards which received thousands of votes from Cruise Hive readers. The categories opened up in September and readers have only been able to vote once in each category.

2018 has been great for new cruise ships and innovations, let’s hope it continues in the years to come. Congratulations to Carnival Cruise Line for receiving more votes than any other in six different categories. We’ll be opening up the 2019 awards later in the year so do keep an eye out for that. 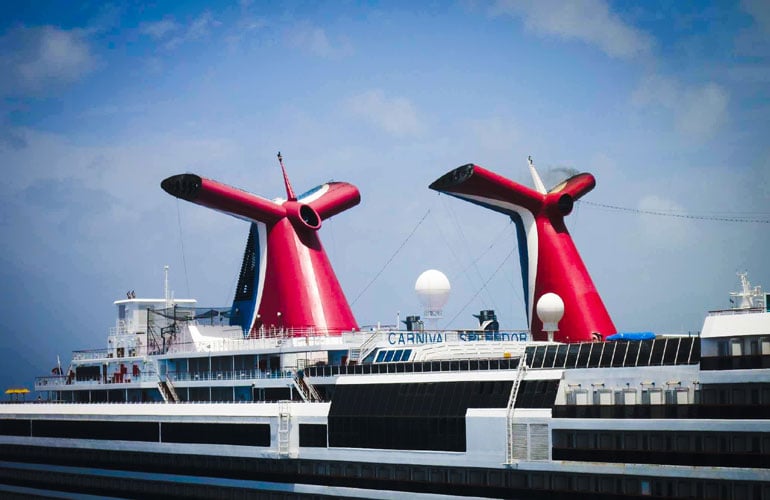