It’s that time of year when we begin announcing the results of the Cruise Hive Cruise Ship Awards, and we’re starting with a very rare draw! It’s also the third time in a row Carnival Cruise Line’s SkyRide has come out on top.

For the second time ever in Cruise Hive’s Cruise Ship Awards, there has been a draw! Coming out as joint winners for Best Cruise Ship Feature is Carnival’s innovative SkyRide feature and Norwegian Cruise Line’s Race Track.

The SkyRide was first introduced on Carnival Vista in 2016 and is also featured on Carnival Horizon which just arrived in the Spring. The SkyRide is great for thrillseekers or those wanting to relax by peddling around in the desired speed suspended above the deck and offering stunning ocean views.

The 800-foot long feature is included in the price of the cruise and has been a major highlight for Carnival Cruise Line’s newest ships. This is now the third year in a row the SkyRide has won “Best Cruise Ship Feature” which is a record.

NCL’s race track was first introduced on Norwegian Joy for the Chinese market and is also featured on Norwegian Bliss which joined the fleet in Spring 2018. The race track is a hugely popular feature on the two Breakaway-plus class vessels.

The track is slightly different depending on the ship, but on Norwegian Bliss, it spans two decks and is a 1000 feet long. Drivers can reach speeds of up to 30 mph in electric powered carts. The next ship to join the fleet in 2019 named Norwegian Encore will feature an even larger racetrack feature expanding further on the concept.

In a far second place came Royal Caribbean’s Ultimate Abyss feature which can be found on Harmony of the Seas and the world’s largest cruise ship Symphony of the Seas.

Ultimate Abyss is a 10-story high slide that twists and turns starting from deck 16 aft all the way down to the Boardwalk neighborhood further down below. In last year’s awards, the feature came in third place which could have been the same this year if it wasn’t for the draw.

In last with the least amount of votes was the North Star which is featured on Royal Caribbean’s Quantum class ships. It was first introduced on Quantum of the Seas in 2014 and is an innovative feature which is a London Eye-type capsule that elevates above the ship offering epic 360-degree views. 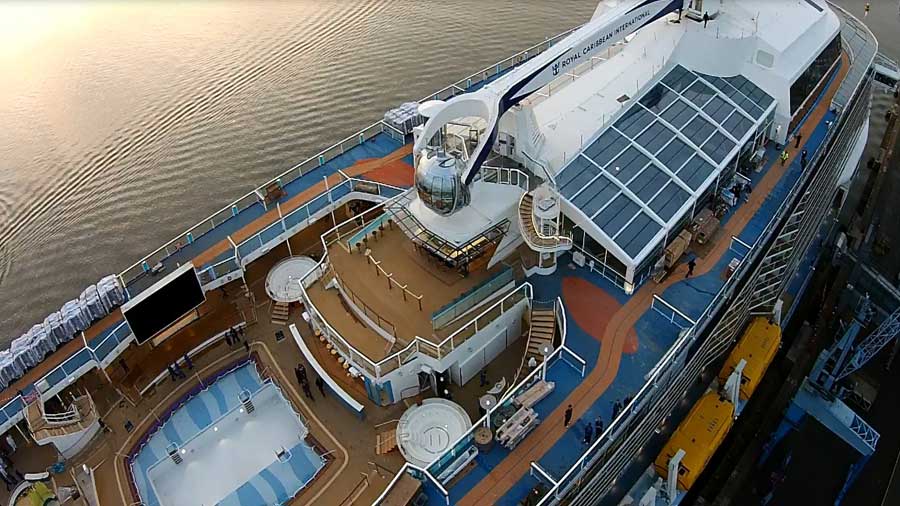 This is the first category out of nine in this year’s awards where thousands of Cruise Hive readers have been voting since the beginning of September. Voters have only been able to vote once in each category, and the results have been checked for any repeating votes with the same IP address.

The annual awards are now in their fifth year and are mainly focused on cruise ships covering different categories on the major cruise lines. Keep checking Cruise Hive for more results over the coming days.