A young passenger from the Carnival Fascination cruise ship was saved in St. Thomas after the wheelchair she was in fell off the pier.

Two local men came to the rescue of a young girl who was in a wheelchair from the Carnival Fascination cruise ship. They saved the girl during a port of call in St. Thomas, U.S. Virgin Islands on Monday morning, August 12.

According to The Virgin Islands Consortium, the girl was in her wheelchair when it fell off the West Indian Company Dock. To save her from drowning, Randolph Donovan, Jr jumped into the water and then held the girl to put a floating tube around her.

Another local, Kuntry Hamilton who is a DJ and was actually set to play music at the pier also jumped in to help fasten a rope around them both so they could be pulled out.

You can watch a video of the rescue as the girl was taken away back onboard the Carnival cruise ship for further medical attention. At the same time, the two heroes are helped out of the water. The video was posted by Randolph Donovan, one of the heroes!

Kuntry Hamilton wrote on his Facebook page the following:

Wake up this morning set and ready to go Dj on WICO Dock for the tourist coming in on the carnival ship not knowing i will be saving a tourist life. Thank God we all are safe and sound.

The love that is coming is tremendous and i want to say thank you to each and everyone. Situation like this all you can do is act and hope for the best. Randolph Donovan I’m glad that we did what we did and we are ok… VI Strong

There were many other people included who helped pull them back onto the pier to safety including ship security officers, ship medical staff and port workers. It occurred just meters away from the gangway near the ship bow. What started as a life-threatening accident turned out to be an amazing rescue. There were cheers from everyone as the rescue became a joyful success.

The Carnival Fascination was calling in St. Thomas as part of 7-day Southern Caribbean cruise which also includes in St. Maarten, St. Kitts, St. Lucia and Barbados. The Fantasy-class cruise ship will return back to its homeport at San Juan, Puerto Rico on August 18. 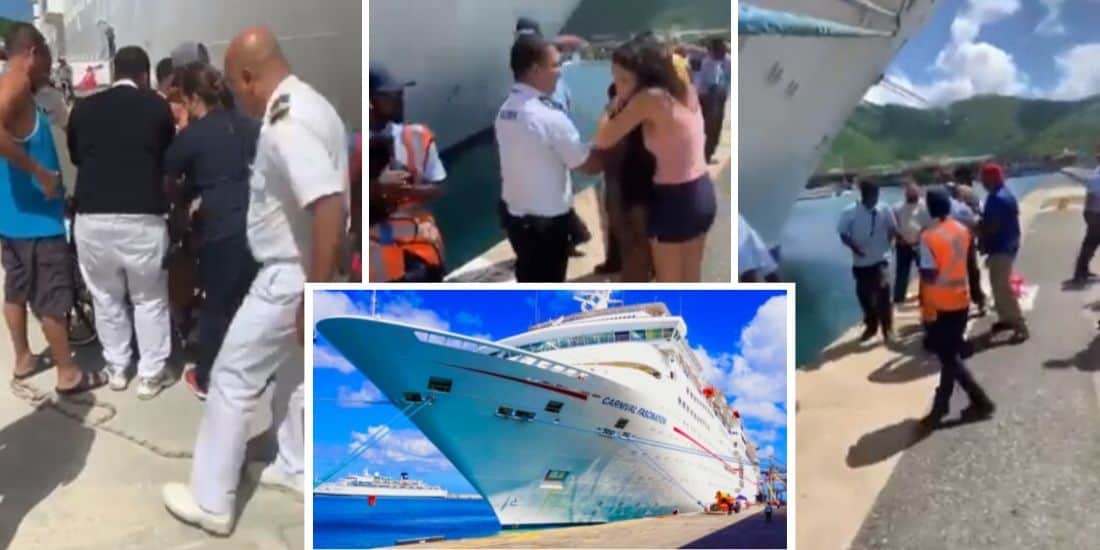