Things to Know About the Mobile Cruise Terminal in Alabama

Things you need to know about the Mobile Cruise Terminal in Alabama. Covering facilities and travel tips for before or after a cruise from the port. 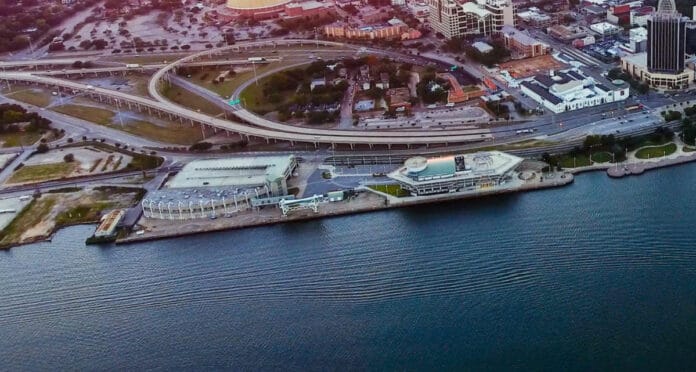 Mobile cruise terminal began as a home port for Carnival Caribbean cruises in 2001. The busy commercial port (12th busiest in the USA) now has a dedicated cruise terminal which provides state-of-the-art facilities and convenient on-site parking for cruisers.

If you’re within easy driving distance of this northern Gulf port, check out the facts about the cruise ships, cruise parking, itineraries and amenities offered at Mobile cruise terminal before booking your next Caribbean cruise. Get ready to cast off and set sail!

Where is the Mobile Cruise Port?

The Port of Mobile is on the estuary of the Mobile River where it flows into Mobile Bay and the Gulf of Mexico. Although it is mainly a commercial port for cargo and container ships, the specially built Mobile cruise terminal is currently used for Caribbean cruises by Carnival Cruise Lines.

The port is located 59 miles west of Pensacola on the Florida Panhandle and a similar distance east of Biloxi, Mississippi. It is connected to both these major cities by the Interstate 10 highway. This makes Mobile cruise terminal very convenient for cruisers who live in any of the Gulf States and nearby cities including New Orleans, LA; Tallahassee (state capital of Florida); Birmingham, AL and Atlanta, GA.

How Big is Mobile Port, AL?

Mobile cruise terminal is part of the port’s 4,000 acre complex which has 5 miles of waterfront and 41 berths. The port includes an upper and a lower harbor which is currently used by cruise ships. It is the only deep-water port in Alabama with a main channel depth of 45 feet which can accommodate the largest post-Panamax ships.

The purpose-built cruise terminal in Mobile Port is spread over two levels connected by four elevators, escalators and stairs. It covers 66,000 square feet and has state-of-the-art security in place for checking cruise passengers and their baggage before departing on a Caribbean cruise. It is connected to a 4-story parking garage. An enclosed walkway/ramp leads from security and check-in directly onto the ship.

As the cruise terminal is on the edge of the downtown area, it has many hotels, restaurants, bars and attractions nearby. They are all within easy walking distance for cruisers with time to spare after parking while waiting to board the ship.

Those with mobility issues, young families, and anyone who needs assistance will appreciate that the terminal has porters on hand. They can help with luggage, give directions and provide any other help you may need during embarkation and disembarkation.

The terminal has a limited number of wheelchairs available. These can be requested from cruise staff when you arrive at the terminal. These wheelchairs are provided for transporting passengers to and from the ship, but they cannot be taken with you on a cruise. You need to make arrangements ahead of time to hire a wheelchair or scooter for the duration of your cruise from a private company such as Scootaround.

There are several restrooms in the terminal close to check-in on the second floor of the Mobile cruise terminal. The first restrooms you will reach are at the top of the escalators on the left. Continue to the south end of the check-in area where there are larger restroom facilities with 10 stalls for women and 9 stalls for men. There is also a toilet on the first floor of the parking garage which is most accessible for those who are waiting in line to go through security.

Mobile cruise terminal has plenty of sitting areas, both indoors and outside. There are about 500 seats inside for those who are waiting to board. Inside the garage parking area there are benches to sit on. There is free Wi-Fi available throughout the terminal.

Apart from an independent beverage stand the cruise terminal at Mobile has no food or drinks options. However, you can make use of some of facilities at the neighboring attractions. Right next to the cruise terminal is The Galley, a waterfront dining venue attached to the Gulf Quest Maritime Museum. It is open to the public even if you are not visiting the museum. It serves tasty Southern snacks and light meals such as Po’boys, sweet potato fries, cheese grits along with a good choice of sandwiches and drinks.

Other dining options can be found a short walk away along Dauphin Street including sports bars and Moe’s BBQ. There’s also a Jimmy Johns sandwich bar on Royal Street and a Chick-fil-A on Francis St. For last minute cruise essential, try CVS or Greer’s Downtown Market, both on Government St.

Unfortunately, Mobile cruise terminal has no facilities for storing luggage. If you arrive at the terminal before check-in has opened your only options are to leave your luggage in the car while you head into downtown for refreshments, or take your luggage with you.

Just to summarize the amenities at Mobile cruise terminal:

When the terminal is not required for processing cruise passengers, it is used as a wedding venue and for hosting banquets and other corporate events.

Getting to Mobile Cruise Terminal

Almost 95% of those who take a cruise out of Mobile, AL drive to the port and park their cars for the duration of the cruise.

Mobile, AL is connected to Biloxi, MS and Tallahassee, FL by the Interstate 10 highway. The port is just 1/2 mile from the I-10 (Exit 26A) and 5 miles from the I-65 (Exit 9) where the I-165 leads directly to Beauregard/N. Water St in downtown Mobile. Routes to the port and Mobile cruise terminal are clearly signposted.

Mobile cruise terminal includes a covered parking garage with 500 parking spaces. It includes six lanes for drivers to drop off (and pick up) cruise passengers and their luggage before parking. From there, cruise passengers can walk a short distance to the screening area for check-in. Elevators are provided along with stairs.

On-site parking at Mobile cruise terminal currently costs $19 per day for regular vehicles; $36 for RVs and oversize vehicles and $54 per day for buses. It is slightly more expensive than some other cruise ports as it is on prime land on the waterfront and close to downtown.

Cruise parking reservations are not usually necessary at Mobile cruise terminal. However, you can make an online reservation for parking at Mobile port for peace of mind if you wish. Those who arrive without pre-booking cruise parking should follow the pre-pay information posted at the entrance to the parking garage.

If the garage is full, drivers will be directed to drop passengers and luggage and then proceed to the overflow parking lot near the Civic Center. This has free shuttle transport back to the cruise terminal.

Which Cruises Sail out of Mobile, AL?

Currently Mobile, AL is only used by Carnival Cruise Lines. Their ship, Carnival Fantasy, currently operates from Mobile during the winter season. It offers shorter mini cruises of 4 and 5 days in the Western Caribbean visiting Cozumel, Costa Maya and Yucatan (Progreso) in Mexico.

Another popular 10-day Eastern Caribbean cruise from Mobile calls in at Key West, Grand Turk, Amber Cove (Dominican Republic), Grand Cayman and Cozumel before arriving back in the Port of Mobile cruise terminal.

There are plans for the newer Carnival Fascination to replace the Fantasy in 2022.

The first cruises sailed out of Mobile Port, AL in 2001. These cruises were with Carnival Cruise Lines who still operate out of this commercial deep-water port. These cruises from Mobile proved popular with travelers from the southern states. In fact, they became the fastest sellouts in Carnival’s cruise history.

The initial cruises proved to be a boost for the whole city of Mobile, bringing cruisers who dropped their dollars in hotels, cruise parking lots, restaurants and other local attractions before and after setting sail.

With this in mind, the city council invested $54,000 to develop the waterfront at the Arthur R. Outlaw Mobile Convention Center in readiness for a purpose-built cruise terminal. They had interest from Carnival, Royal Caribbean and Holland America cruise lines.

In 2004, the new cruise terminal was opened, costing somewhere between $10 and $20 million. It was the home port of Carnival’s Holiday cruise ship with itineraries mainly to Mexico showing 100% capacity.

In 2007, Mobile won the coveted “Port of the Year” award from Carnival, based on excellent feedback from cruise passengers. In 2008, Carnival announced the Holiday would be replaced by the Fantasy in 2009. The city responded by promising a new gangway at Mobile cruise terminal and 450 more parking spots on-site.

In 2010, despite the catastrophic oil spill in the Gulf of Mexico from the Deepwater Horizon oil rig, the Mobile cruise industry had its best year ever

This continued until 2011 when Carnival decided not to operate their cruise ships (at that time the Elation) out of Mobile. The reason for their relocation to other cruise ports was the higher fuel costs involved in sailing from this northern Gulf port and the inability to raise ticket prices from this location.

From 2011 to 2016, Mobile port had no cruise ships based there. Unfortunately, it had invested heavily in developing the new Mobile cruise terminal and had accrued debts requiring $1.8 million repayments annually until 2030. Eventually Carnival signed a new contract, returning to Mobile cruise port.

More recently, Carnival signed a 3-year agreement with Mobile Port with plans to relocate the Carnival Fascination to the port in January 2022. She will replace the Fantasy, which is thought to be retiring from the fleet. This all looks good for the future of Carnival cruises continuing to use Mobile cruise terminal as a flourishing home port.

What cruise lines leave from Mobile?

Currently the Port of Mobile cruise terminal only serves Carnival Cruise Lines and is the home port of Carnival Fantasy.

Where do you park when going on a Mobile cruise?

How far is the cruise port from Mobile Airport?

Mobile Regional Airport is 13 miles from Mobile cruise port. Allow at least 30 minutes for the journey by taxi, hotel shuttle service or rental car, and up to an hour when traffic is heavy.

How large is the Port of Mobile, Alabama?

The Port of Mobile covers an area of over 4,000 acres and is the only deep-water port in Alabama. It is the USA’s 12th largest port based on tonnage. It has two harbors and 41 berths handling mainly container ships, coal, aluminum, lumber, paper, iron, steel, grain, paper, heavy lift and oversize cargo. 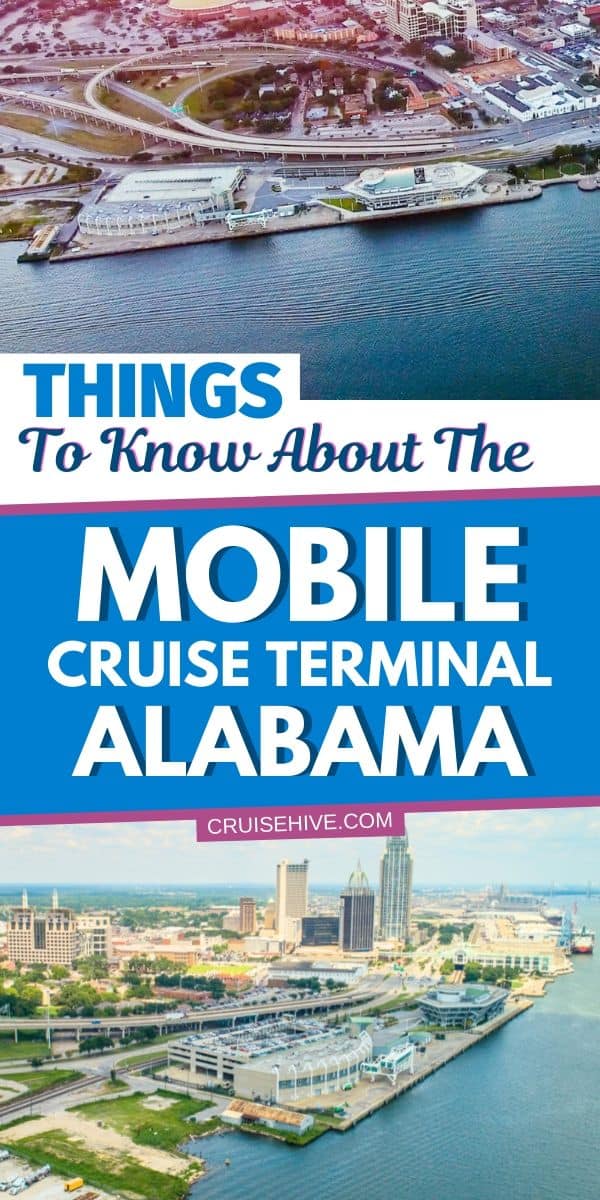