29 Things to Do in Southampton UK for Cruise Visitors

Take a look at these things to do in Southampton UK for cruise visitors. Good ways to enjoy the port city before or after your vacation.

Carnival Makes It Official- No Cruises Until May

Cruise visitors will find dozens of things to do in Southampton when staying before or after their cruise. This bustling port and coastal city has many historic attractions as well as being an important hub for maritime and WW2 activities. There’s a broad range of unique museums and Tudor attractions within the medieval city walls and the waterfront provides an additional place for entertainment, sports, shopping and dining.

We’ve picked out some free things to do in Southampton and some family-friendly activities as well as a selection of places to visit within easy reach of the city.

Once you’ve discovered just how many things there are to do in Southampton, you’ll need to stay an extra night or two to enjoy them all!

West Quay is a shoppers’ paradise with 800,000 sq.ft. accommodating 130 shops, boutiques and department stores from M&S to Zara. Close to the docks it has a dedicated multi-storey car park on Harbour Parade.

One of the most thrilling things to do in Southampton is to get out on the water with a powerboat or Extreme RIB Experience from Powerboat Days. You can also charter a private yacht or join a water-based treasure hunt and explore the waters around the Solent and Isle of Wight.

Football fans can watch Southampton Premier League team play a home match at St Mary’s Stadium during their city stay. The stadium has 4 modern stands, two large screens and many other top-notch facilities to enhance your match experience.

Free Things to Do in Southampton

Bordered by the busy River Itchen, Riverside Park is a 32-acre green space for relaxing and enjoying some fresh air and exercise. Popular for river fishing, this Site of Special Scientific Interest has tennis courts, football pitches, cricket, a skate park, three children’s playgrounds and a miniature railway for getting around them all.

If you’re visiting SeaCity, walk across to the beautiful bronze and granite monument capturing the detailed work of the local engineers who sailed aboard the Titanic and lost their lives in the disaster.

Located in East Park, the memorial is in remembrance of 24 engineers, 2 boilermakers, a plumber, clerk, 6 electrical engineers and the Chief Engineer Officer who never returned. The neighbouring Titanic Musicians’ Memorial is also worth checking out.

Close to the city centre, Southampton Common is a 326 acre site of ponds, woods and grassland for walks, ball games and bike rides spotting a host of birds and wildlife.

One of the best things to do in Southampton is to take a self-guided walking tour around the 12th-century defensive city walls. Stretching over a mile, they are the third-longest unbroken stretch of medieval city walls in the UK and include 29 towers and 8 gates.

Starting at Bargate you’ll pass the Town Quay, Back of the Walls, Wind Whistle Tower, St Michael’s Church, and Mayflower Park with information boards along the way.

More like a castle than a gate, Bargate is a well-preserved entrance to the old city and is 800 years old. Flanked by Drum Towers it has 5 Gothic archways and is topped by a figure of George III in Roman toga, added in 1809

Family-friendly Things to Do in Southampton

Escape the city and enjoy a day on a Victorian farm at Manor Farm Country Park. Opened in 1979, it has animal petting areas, rural walks and actors in Victorian costume. It provides visitors with the chance to join in or watch feeding, milking and other farm activities just 7 miles east of Southampton.

The Go Ape Treetop Adventure Park is one of the most popular adrenalin-pumping things to do in Southampton. Located in the Itchen Valley Country Park, visitors must navigate the aerial obstacle course using zip lines and swings through the treetops. Suitable for all ages, there are qualified instructors on hand to assist.

12. Take a Ferry to the Isle of Wight

Red Funnel Ferries offer day trips to West Cowes, Isle of Wight departing regularly from Southampton docks. Spend a day on the beach, take your bicycle and explore this 150 square mile island or look forward to visiting some of the island’s many attractions.

From Osborne House (Queen Victoria’s former residence) to Blackgang Chine theme park, there’s a host of things to do from Southampton on the nearby Isle of Wight. Adult return prices (2020) are currently £27.20 and the crossing takes about an hour each way.

The best way to view Southampton and its boat traffic is from the water. The Hythe Ferry transports you across Southampton Water to the village of Hythe in a 10-minute trip offering up-close views of huge moored vessels nearby. You land at the pier which is 640 metres long, making it one of the longest piers in the UK.

As part of your Hythe ferry trip. Ride along the extensive pier on the heritage tramway. Opened in 1909, it is the oldest pier train in the world. When you disembark you are within easy reach of riverside walks and bike rides in the New Forest National Park.

Museums and Historic Attractions in Southampton

Dedicated to Southampton’s maritime history, the SeaCity Museum is a top attraction for anyone interested in the history of the port and the many famous ships that sailed from it including RMS Titanic and RMS Queen Mary.

Exhibits trace maritime history in Southampton back to the Middle Ages in an exhibit called “Gateway to the World” which has many interesting interactive displays and dioramas. SeaCity is in a contemporary extension to the beautiful Art Deco building that also houses the City Art Gallery and Civic Centre.

Right on the waterfront at Berth 110 in Ocean Village, the SS Shieldhall is part of the UK’s National Historic Fleet.

Built on the Clyde in 1954, this sludge boat is the only surviving steam ship of its kind left in Europe. It demonstrates the Golden Age of Steam when steamboats plied the world’s oceans from 1870 to around 1960.

The Tudor House in Southampton is another chunk of history. Set on St Michael’s Square, this black-and-white timbered house was built in 1491 for a wealthy merchant family. It was later home to artists, bonnet makers, bookbinders and dye workers. Now an interesting museum showcasing 900 years of local history, it is surrounded by Renaissance style formal gardens.

Run by volunteers, Bursledon Brickworks Museum is the last steam-driven brickworks in England. See how bricks are made, from the engine house and boiler to the brick kiln and drying sheds. Located in Swanwick, it’s more interesting than it sounds with hands-on activities, café and play area!

The museum has an unrivalled collection of restored aircraft including the Sandringham Flying Boat and the Spitfire F24 fighter plane that was built in the area. The museum is also home to the Air Training Corps National Museum so you get 2-for-1 at this museum on Albert Road.

Cultural Things to Do in Southampton

Founded in 1939, the Southampton City Art Gallery is a must for art lovers in search of cultural things to do in Southampton.  It has 5,000 exhibits spanning paintings, sculptures, films, photographs and drawings. It spans 8 centuries of artworks including a 14th-century altarpiece by Allegretto Nuzip to present-day British artists including Richard Deacon.

The Grade II listed Mayflower Theatre has a lively program of entertainment from West End productions to comedy, opera and rock. Opened in 1928, it has hosted concerts by the Beatles, Rolling Stones and Queen and has excellent restaurants, bars and VIP boxes.

Get tickets to an event at the O2 Guildhall Southampton music venue. Check out what’s on at the Guildhall, Solent Suite and the Lecture Theatre and start your cruise with a memorable concert or performance.

Things to Do Near Southampton

If you are visiting Southampton by car, there are some unmissable places to visit and things to do near Southampton that you won’t want to miss.

Thirty minutes from Southampton, Beaulieu Motor Museum is on the Montagu family estate which was originally a 13th century Cistercian Abbey. Now home to over 250 restored vehicles it is a fantastic attraction for motorheads while the rest of the family can explore the house, Victorian kitchens and extensive parkland. There’s even a vintage bus tour for getting around!

Close to Beaulieu, Buckler’s Hard is a charming 18th-century village where shipbuilding took place. Most famously, the village shipwrights built all the ships for Nelson’s navy using wood from the New Forest nearby. There’s a Maritime Museum, Woodland Trail, Shipwright’s Cottage and tea rooms.

Portsmouth is just 19 miles from Southampton and the Historic Dockyard is the final resting place of Nelson’s flagship HMS Victory and the salvaged Mary Rose Tudor warship.

There are plenty of museums in the warehouses including a boatbuilding exhibition, Royal Naval displays, interactive exhibits and a pirates’ exhibit.

The best way to see Portsmouth Harbour is from the air! The sail-like Emirates Spinnaker Tower stands 170 metres high with a Skywalk viewing area and Café in the Clouds. Back at ground level, you’re steps from the designer shopping outlet at Gunwharf Quays.

If you run out of things to do in Southampton, visit the lovely rural market town of Romsey just 8 miles north of the city. King John’s House reveals 750 years of history in the area with a pretty garden and tea shop. Romsey Abbey is a magnificent building filled with religious artworks and treasures and you can stroll along the Test Way to Broadlands, former home of the late Lord Mountbatten.

Can you believe Southampton is just 39 miles from Stonehenge? Managed by English Heritage, this prehistoric stone circle attraction includes an informative Visitor Centre, shop and café. Shuttle buses transport visitors up to the monuments for a closer look at this world-famous landmark.

The New Forest National Park is less than 10 miles from Southampton with things to do such as walking, scenic drives, nature spotting, and looking for the native New Forest ponies. Beneath the shady beeches, you may also spot red, roe, and fallow deer. Explore tiny villages, enjoy a meal in a restaurant or go exploring on horseback from one of the stables.

Worth Reading: 17 IDEAL Hotels in Southampton Before or After Your Cruise

FAQ on Things to Do in Southampton

What is famous in Southampton?

Southampton is the second busiest port in the UK after Felixstowe, and the busiest passenger port for cruises and the Isle of Wight ferry.

Southampton is also famous as the port of departure for the ill-fated RMS Titanic, the production of Spitfire aircraft in WW2 and was one of the main departure points for the D-Day Landings.

Is Southampton a safe city?

Although crime is on the rise in the city, Southampton is rated as having a moderate crime rate for burglary, muggings, car theft and higher for drug-related incidents. Most visitors taking sensible precautions will have a safe and pleasant stay in the city and are unlikely to experience any crime.

What’s the closest thing to do near the Port of Southampton?

How far is Southampton from London?

Southampton cruise port is 80 miles southwest of London on the south coast of England. 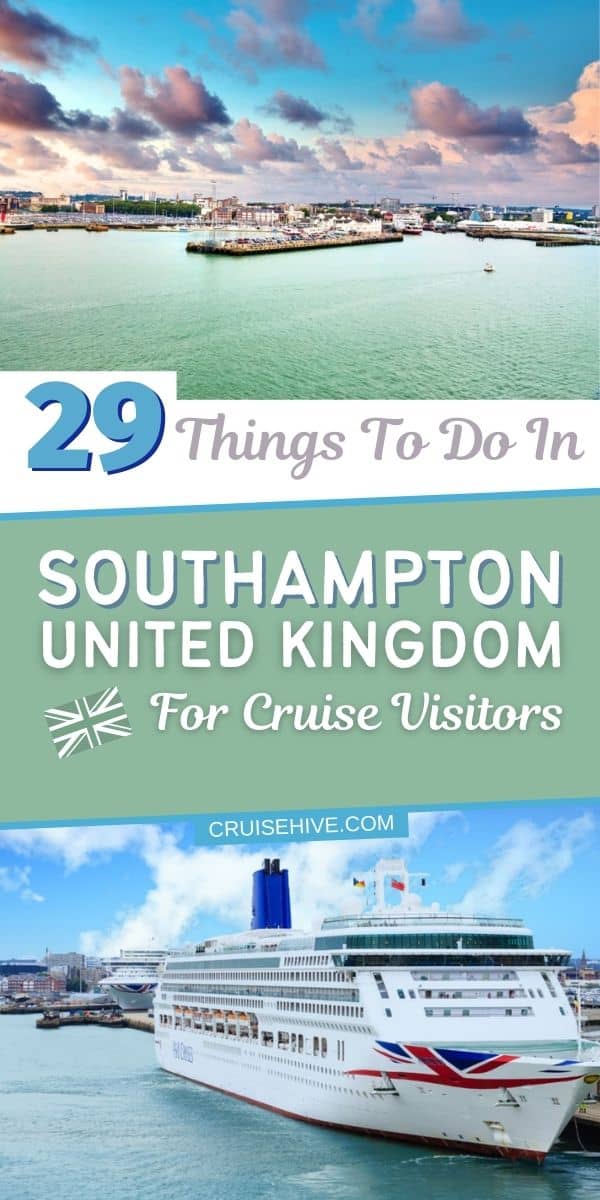