The Essential Guide to All Southampton Cruise Terminals

The essential guide and travel tips on all Port of Southampton cruise terminals. Covering locations, cruise lines, and facilities.

Southampton cruise terminals have been part of cruising history for over 180 years. Long before air travel, anyone wanting to cross the Atlantic did so on some of the world’s most famous ships, including the RMS Queen Mary, QE2 and the ill-fated Titanic.

Today, Southampton remains the largest passenger cruise port in the UK with a fleet of cruise ships regularly departing down Southampton Water on the first stage of their worldwide voyages.

While most cruise ships depart from Southampton cruise terminals the same day that they arrive (after all, time is money for cruise ships!), some visiting ships drop into Southampton as a port of call and may berth overnight.

If you’re departing from one of the four Southampton Cruise Terminals, we have all the information you need to know before you go. Check out the location, facilities and directions about each cruise terminal so your cruise departure from Southampton will be “plain sailing!”

Port Southampton is managed by the Southampton Port Authority. It has four cruise terminals and each has one or more berths. When busy, the Fruit Shed (Berth 104) is used as a temporary measure. The cruise port handles over 500 ships calls and accommodates more than 2 million cruise passengers in additional to serving another 3 million passengers heading to and from the Isle of Wight.

Southampton cruise terminals are arranged around the point of land at the confluence of the River Itchen and the River Test. They then become known as Southampton Water which flows into the Solent about 5 miles further south.

Port Southampton dock facilities for cruisers include car parking (short-term and long-term) and toilets. There is a taxi rank at each terminal.  If you have booked direct bus transfers to and from the cruise ship with your cruise line, these buses will be allowed to pick you up and/or drop you off right next to the ship’s terminal building. Taxis also have access inside the port’s secure area.

Cruise ships generally arrive and depart from the berth or cruise terminal allocated to their cruise line. However, in exceptionally busy times, or when work has to be scheduled, cruise ships can be diverted to another berth by the Port Authority. Check out your cruise paperwork so that you know exactly which terminal to head for on arrival.

Southampton Port is spread over a huge area so you don’t want to be dropped off at the wrong terminal. Ascertaining the correct cruise terminal in Southampton also helps you find the best cruise parking that is closest to your ship’s berth.

The full address of Queen Elizabeth Cruise Terminal is:

Opened in 1966, this terminal occupies Berths 38 and 39 near the Grain Terminal and is part of the Eastern Docks area. It has been modernised in 2003 and again in 2016. Entry is via Gate 4, like Ocean Terminal users, but the road continues for almost 1km (over half a mile) before reaching the docks and cruise terminal at the end of the peninsula.

There is comfortable seating, toilets, vending machines offering a limited range of drinks and snacks as well as a magazine stand offering a range of complimentary magazines and local maps.

The closest hotel to the QE Cruise Terminal is the Ennios Hotel, a former warehouse. There is long-term and short-term cruise parking close to this terminal.

The full address of Ocean Cruise Terminal is:

Opened in 2009 and recently upgraded, Ocean Cruise Terminal is generally listed as Berth 46. It is part of the Eastern Docks in Southampton Port. It is the closest terminal to the town and entry is via Dock Gate 4.

Ocean is one of the most modern terminals in Southampton Port and one of the busiest.  It has excellent facilities for those waiting to check-in and depart on a cruise with a large reception area, magazine stand and seating for around 1000 cruisers. It is fully accessible for disabled passengers. Large glass windows allow you to watch the ship being loaded with provisions and luggage.

The terminal has a takeaway Ceanos coffee shop and fully licensed bar in the Departure Lounge on cruise days which offers hot food, hot and cold drinks, sandwiches and snacks.

There is also an area with vending machines and a water cooler. Priority seating is in a separate area and P&O Peninsular Club members can also use this area while waiting to board.

This Southampton cruise terminal also has a passenger services desk, cruise parking and Wi-Fi but no phones or ATMs. The nearest cash machine is in Tesco Express at Ocean Village about 10-15 minutes’ walk away. If you are looking for a hotel close to Ocean Terminal, the Ennios Hotel is in a converted former warehouse nearby.

The full address of City Cruise Terminal is:

City Cruise Terminal is a modern terminal designed to accommodate larger cruise ships. It was opened in 2003 and upgraded in 2015. It is located at Berth 101in the Western Docks area of Port Southampton.

It is the closest terminal to the railway and coach stations and it is possible to walk the distance if you have light luggage, taking about 10-15 minutes. Entry is via Gates 8, 10 and 20, but gate 10 is the most well-used.

The closest hotels to City Terminal are Novotel, Ibis and Holiday Inn in the city. Ibis and Novotel are opposite Gate 10 and the Holiday Inn is outside Gate 8.

Cruisers can pick up hot and cold drinks, hot food, sandwiches and snacks from Ceanos Snack Bar which operates in the Departures Lounge. It also operates a licensed bar and has a separate kiosk when ships are in dock.

The Arrivals Lounge has seating, toilets, vending machines for drinks and snacks and a magazine stand. There is cruise parking close by and the Mayflower Park offers close views of the ships at berth.

Ships expecting to depart from this busy Southampton cruise terminal in 2020 include the following:

The full address of Mayflower Cruise Terminal is:

The Mayflower Cruise Terminal opened in 1960 and was modernised in 2003 and 2015. It occupies Berth 106 and is over a mile from hotels, railway and bus stations so you will need a taxi or local transport to the berth about a mile away. Entry is via Dock Gates 8, 10 and 20 with most traffic using Gate 10. Just opposite this gate you will find the Novotel and Ibis hotels with Holiday Inn near Gate 8.

Cruisers can pick up hot and cold drinks, hot food, beer, wine, spirits, sandwiches and snacks from Ceanos Snack Bar which operates in the Departures Lounge when ships are in dock. There is a seating area with toilets and a magazine stand. The Arrivals Lounge has seating, toilets, vending machines and a magazine stand when ships are docked. There is short and long-term cruise parking close to the terminal.

Getting to Southampton Cruise Terminals

Southampton cruise terminals are very easy to access from nearby road and rail links.

By train, coach and bus:

Your public transport will end at the railway or coach station in Southampton city centre and you will need to use a taxi or Uber to reach the cruise terminals about 2 miles away. Fares are around £10 one way.

Follow the M3 southbound and follow signs merging onto M27 west. Exit at J3 and follow signs for Southampton Docks which will take you along the M271 and A33 (first exit) dual carriageway to the Dock Gates.

On arrival at Southampton Docks, electronic signs list each cruise ship that is currently in port and which cruise terminal they are at.

Remember to pre-book cruise parking to get the best rates and be sure of a space when you arrive. These companies are either a short walk from the cruise terminals or offer a complimentary shuttle bus to take you and your luggage to and from the ship.

The nearest airport is Southampton International Airport which serve UK and European destinations. Long-haul flights arrive in Heathrow and Gatwick but they are 70 miles and 90 miles away respectively.

You will need to arrange transport between the airport and Southampton cruise terminals. This can be arranged directly with your cruise line. You can book private transfers, use a bus/coach service such as National Express or book a private car, taxi or Uber.

Trains run directly from Gatwick to Southampton station every hour but there is no rail link from Heathrow.

In 2016, Royal Caribbean International (RCI) signed a £5.5 million deal with Southampton Port. This secured Berth 101 as the official UK cruise departure point for all RCI cruises until 2023. It secured 15,000 cruise related jobs and over £1 billion in associated economic business for the area.

Southampton cruise terminals received a £7 million government grant to install shoreside power connectivity for cruise ships while they are in port. This power system (known in the trade as cold ironing) allows cruise ships to plug into the power grid and operate all their onboard operations without having to run their diesel or gas turbine engines.

It is a much cleaner and more efficient system, significantly reducing pollution and improving the eco-friendly operations of each cruise ship.

What’s the most popular cruise terminal in Southampton?

The busiest cruise terminal in Southampton Port is City Terminal. It has 50 service decks to check-in cruisers quickly and efficiently as part of the security and embarkation process.

What cruise lines depart from Southampton?

Port Southampton is the home port to the following cruise lines:

It is also used by many other major cruise lines including Norwegian Cruise Lines, MSC, Fred Olsen, Crystal Cruises, Azamara, AIDA, Saga and Silversea and as a port of call.

How many cruise terminals are in Southampton? 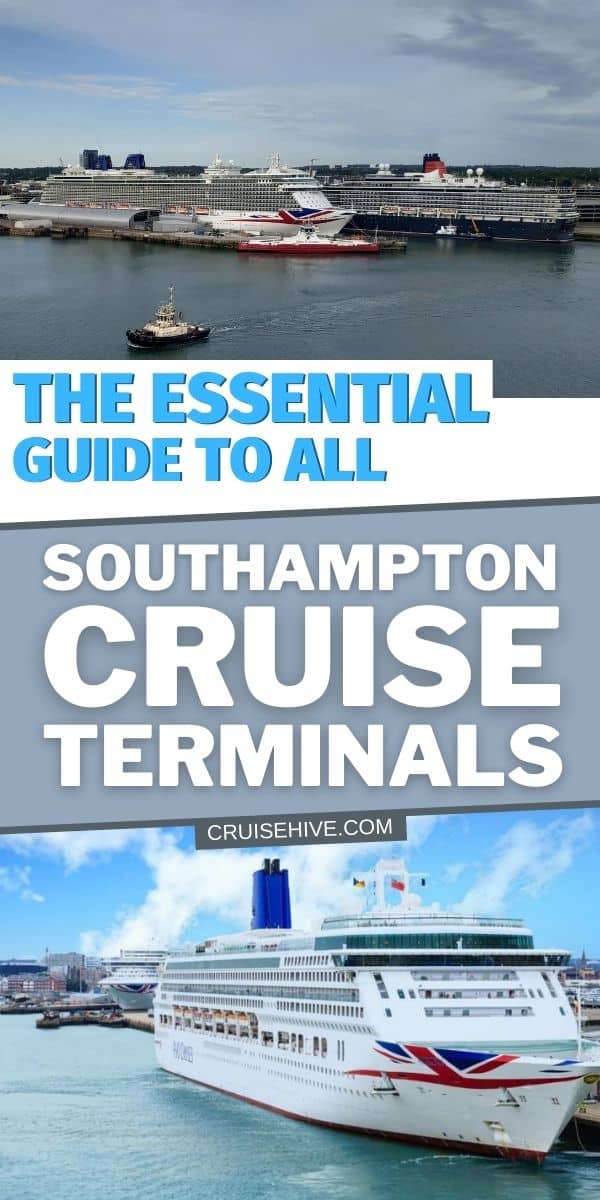