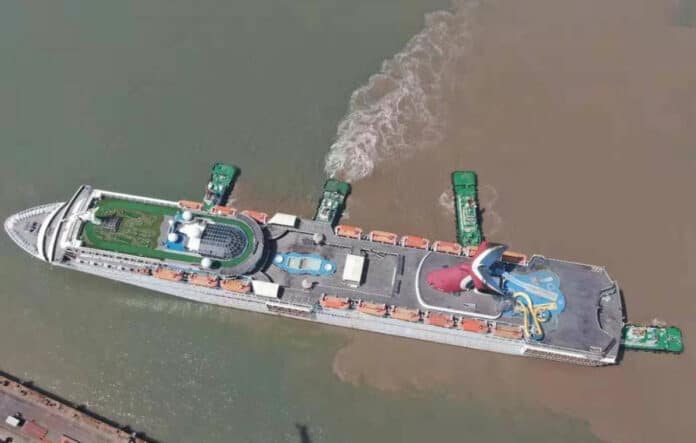 Carnival Fascination, which was sold by carnival Cruise Line in 2020 due to the impact of the global pandemic, is currently undergoing a refurbishment to restart cruises out of mainland China.

Those who have cruised on the former Carnival cruise ship and follow the cruise line closely will be happy that the ship is not being scrapped and will remain in service in Asia.

The Fantasy-class cruise ship is currently in China undergoing a refurbishment, and cruisers will be happy to know she will continue service under her new owner of Century Cruises.

Carnival Fascination recently arrived at the Zhejiang Union Repair Shipbuilding facility, which is located in Zhejiang Province. She is being refurbished as a luxury cruise vessel and is set to remain in operation. The cruise line has already been recruiting.

The Zhejiang facility is focusing on the luxury cruise market and in 2020 had complete the renovation of the Pacific World cruise ship, formerly named Sun Princess.

The ship is now named Century Harmony, as confirmed in December 2020 when the name was seen on the hull while making a port stop in Gibraltar. Before that, she had been in a cold layup in Cadiz, Spain, during the suspension of operations.

Century Harmony is owned by Century Cruises that offer Yangtze river cruises, a part of Chongqing New Century Crusie Co based in Chongqing, located in the Sichuan province.

It was previously reported that the vessel would become a floating hotel, but more recently, the ship could actually offer luxury cruises out of Xiamen, Fujian Province. The cruise line currently operates six river cruise ships, and Century Harmony will be the largest to join the fleet.

Worth Reading: Looking Back at the Carnival Fantasy Cruise Ship

Carnival Fascination was built for Carnival Cruise Line at the Helsinki shipyard in Finland and made its debut in 1994. The ship is 70,367 gross tons with a guest capacity of over 2,000 at double occupancy.

At the moment there are only four Fantasy-class ships that remain in the Carnival fleet, Carnival Ecstasy, Carnival Sensation, Carnival Elation, and Carnival Paradise.