A disruptive passenger threw furniture overboard from the Baltic Princess, which is operated by Silja Line. 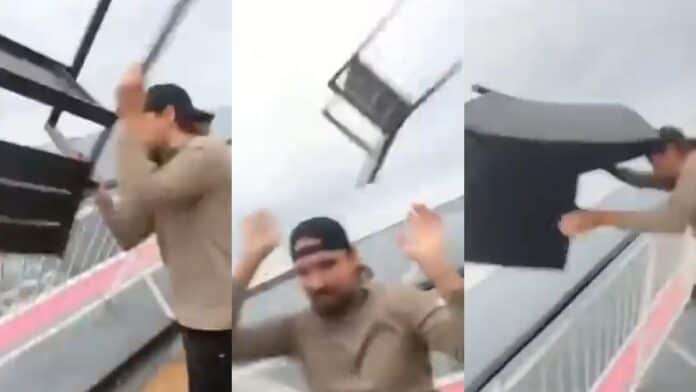 There has been a lot of press in recent months about unruly behavior on cruise ships, but disorderly conduct isn’t limited to passengers on mega-ships.

In an incident captured on video and posted to social media, several construction company employees, including the manager of the company, have damaged property aboard the cruise ferry MS Baltic Princess, and may now be facing criminal charges.

According to the Helsinki newspaper Iltalehti, during a voyage in early December, employees from the Finnish construction company Pimura Oy were unruly and disruptive onboard MS Baltic Princess.

The company’s 25-year-old manager was part of the onboard party, and even filmed the poor behavior and posted it to his TikTok account. He later deleted the video, but not before it was uploaded to Twitter by other individuals.

The unruly behavior followed a full day of drinking, and included throwing several chairs, cushions, and a small table off an aft-facing stateroom balcony, while others in the party filmed the actions and laughed.

The members of the same party reportedly also urinated in one of the ship’s saunas and were “inappropriate” at the ship’s bar, though details of that behavior have not been clarified.

Tallink Silja, the company that operates MS Baltic Princess, has charged the partygoers for the cost of the furniture, as well as other incidental charges.

“They have had to pay for the furniture thrown into the sea already there, and an additional bill has followed,” said Marika Nöjd, communications manager from Tallink Silja.

The cost of the furniture has not been disclosed, but because it is made to fire-safe standards for use onboard the vessel, it is more expensive than standard furniture would be. Additional fines may also be levied, and local police have been asked to investigate the matter.

More Than Just a Fine

The cost of the damaged property is not the only concern. Littering at sea is a grave offense, as any cruise ship passenger knows from onboard signage and safety messages that prohibit throwing anything into the water, even small items.

The cruise ferry line is considering additional charges that may include a criminal filing as they continue to review the incident.

“We are shocked by the incident, especially by the littering of the Baltic Sea where we hope that even cigarette butts will not end up into the seas,” said Nöjd. “We have not yet filed a criminal complaint, but we will review this incident during the week. However this is certainly an environmental crime.”

Furthermore, the passengers’ poor actions could have had much more severe consequences. The video shows some of the furniture bouncing off the ship’s hull, potentially causing cosmetic damage.

Once in the water, the overboard items cause a hazard in the already delicate Baltic Sea and can be dangerous to smaller craft in the area, as well as to local wildlife.

According to news outlet Yle, as a response to the overall incident, all passengers involved have been banned from all ships operated by the ferry service for at least the next year.

MS Baltic Princess is a cruise ferry, a small type of ship that, while not constructed for large-scale passenger operations, does offer short, local getaways with amenities similar to a cruise ship.

Onboard are familiar venues such as various bars and eateries, a smoking lounge, a main show lounge, pools, duty-free shopping retailers, spa facilities, and a casino. In addition to passenger service, cruise ferries also carry vehicles and cargo.

MS Baltic Princess first entered service in 2008, and today is operated by Silja Line, which is in turn owned by Tallink. Four vessels are part of the line, and together transport approximately three million passengers and 200,000 vehicles annually.

Currently, MS Baltic Princess is operating a route between Turku and Långnäs in Finland as well as Kapellskär in Sweden, a route of approximately 125 miles (200 kilometers) one-way. The vessel can welcome approximately 2,500 passengers at once, along with 600 cars and up to 75 trucks or trailers.