Tropical Storm Florence which is expected to become a major Hurricane through next week has impacted the itineraries of Carnival cruise ships including the newest Carnival Horizon.

Even though Florence is a Tropical Storm it is impacting the cruise industry. The storm will also become a lot more powerful over the coming days and become a major Hurricane. As Florence moves west towards the U.S. East Coast cruise ships based there are being forced to make itinerary changes. Norwegian Cruise Line, Royal Caribbean and now Carnival Cruise Line are being impacted.

The Captain of the newest ship in the fleet has already sent out a letter to guests mentioning that the current voyage which departed New York City on September 5 is being altered.

The ship’s call in Grant Turk on September 8 will be extended until 4:30 PM. The ship was originally scheduled to leave at 2:30 PM. The cruise line will be keeping a close eye on Tropical Storm Florence as it could force the ship to make further changes. The scheduled call at San Juan, Puerto Rico on Sunday may have to be canceled but instead, there would be an extended visit to Amber Cove on the same day instead. 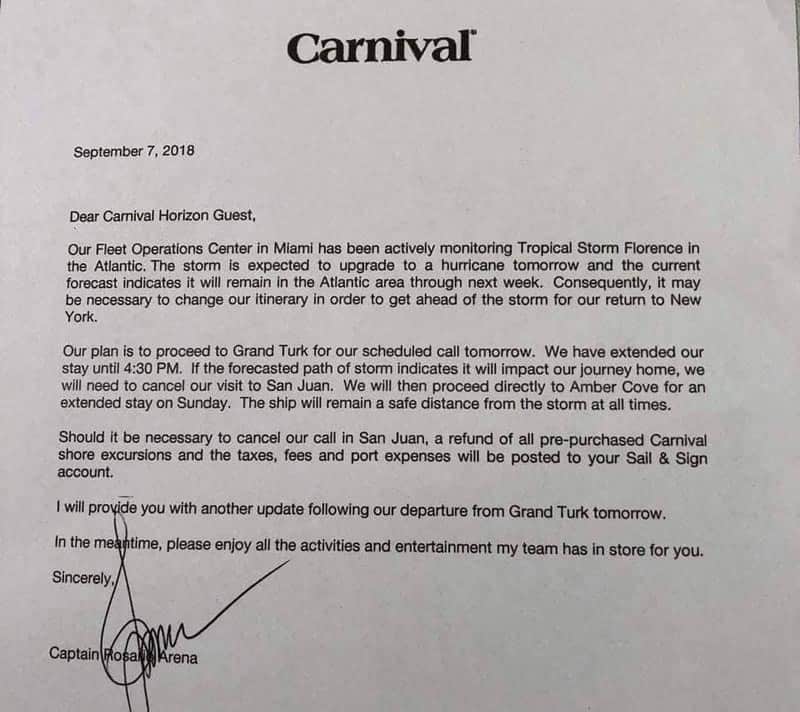 The Carnival Horizon captain will be monitoring the storm development and guest on the current cruise will be kept updated. It is important to keep them safe and away from any weather danger. If the call in Puerto Rico is canceled guest will be refunded any booked shore excursions, taxes, fees, and port expenses.

Carnival has also altered the itinerary of Carnival Pride to keep guest and crew a safe distance from Tropical Storm Florence. The 7-night sailing from Baltimore to Bermuda which will depart on Sunday, September 9 will now operate a revised itinerary.

At the moment according to the National Hurricane Center (NOAA), Florence has maximum sustained winds of 65 mph and moving directly towards the U.S. East Coast at 9 mph. The storm will become a major Hurricane very soon and is extremely dangerous causing high swells, strong winds, and heavy rainfall.

Florence is coming more organized and upcoming advisories are expected to show an increase in strength as it moves over warmer waters. Those with booked cruises over the coming week out of the west coast and those on land need to watch how this Tropical Storm develops.

Hurricane season is now hotting up with more active storms developing in the Atlantic. Next week we could see major Hurricanes in the Caribbean so do keep checking for updates from the cruise line. Cruise Hive will constantly keep readers updated as much as possible on anything impacting the cruise industry. 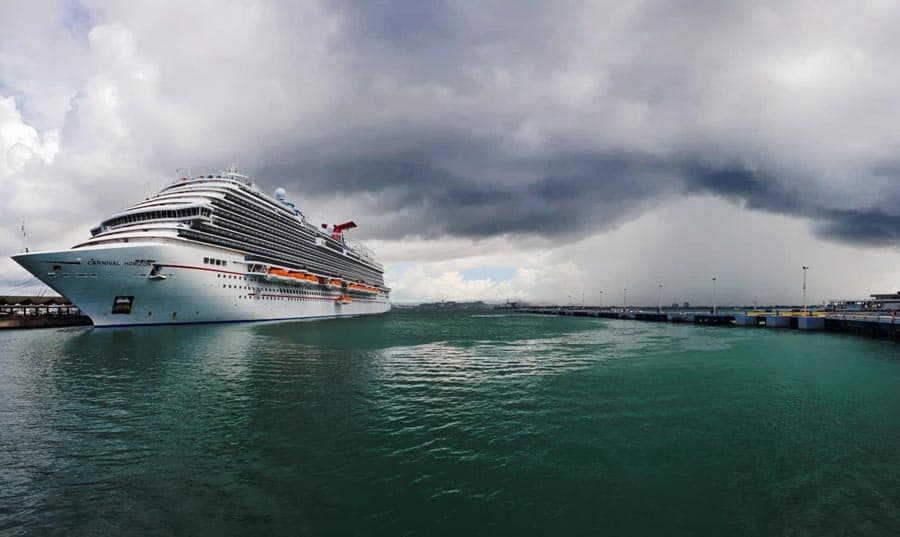