The Fantasy-class Carnival Sensation has begun her journey to the ship-breaking yard in Aliaga, Turkey, to be recycled for scrap.

The end has come for another Fantasy-class Carnival Cruise Line ship, as Carnival Sensation has set sail for the ship-breaking facility in Aliaga, Turkey. Satellite tracking data has confirmed the ship is en route for the same scrapyard that has been instrumental in the ends of three of her sister ships, Carnival Fantasy, Carnival Inspiration, and Carnival Imagination.

Carnival Sensation on Her Final Journey

The news of Carnival Sensation‘s retirement first broke in early February when it was announced that the vessel would not restart passenger operations. The ship had previously been scheduled to begin cruising from Mobile, Alabama, on March 7, 2022, but those sailings were reassigned to Carnival Ecstasy.

At first, Carnival Sensation was simply delayed, but it was soon confirmed that the ship would not return to service. The vessel was listed for sale and quickly sold for scrap.

Carnival Sensation departed from her holding position in The Bahamas on March 18, and is currently sailing across the Atlantic Ocean for the final time. She is scheduled to arrive in Aliaga, Turkey, on April 4, 2022.

While the ship has not hosted passengers since the industry-wide pandemic shutdown began more than two years ago, Carnival Sensation has still served the cruise line well in recent months. Instead of sailing commercial voyages, the ship has been used to house crew members transitioning in and out of quarantine and isolation periods.

This has helped crew members stay safe and has allowed for better social distancing and health and safety protocols aboard active vessels. This tactic has been instrumental in maintaining safe cruising environments, which has enabled vessels to continue sailing without being denied at ports or forcing cruise cancelations.

As the ship now heads for the ship-breaking facility, she will continue Carnival Cruise Line’s commitment to responsible environmental practices until her very end. The Aliaga yard, located on the Aegean coast in western Turkey, uses stricter environmental protocols than similar ship-breaking yards in Bangladesh, India, and Pakistan.

For example, while ships are beached at the Aliaga yard, demolition crews take steps to control how toxins are exposed as ships are broken, such as oil booms to contain potential spills, concrete cutting floors to minimize seepage into the beach, and improved asbestos removal techniques to minimize contamination. Old cruise ships can potentially contain many toxins in insulation, pipes, conduits, sewage tanks, and more.

These facilities also have improved safety measures to safeguard workers during the demolition of massive cruise ships.

Carnival Sensation first entered service in 1993 as the third of the Fantasy-class vessels. The vessel was built at the Kvaerner Masa-yards in Helsinki, Finland, weighing in at 70,367 gross tons and stretching 855 feet in length. During her heyday, Carnival Sensation had a guest capacity of 2,052 passengers, with 920 crew members providing sensational service.

Read More: Former Carnival Cruise Ships, Where Are They Now?

Millions of passengers sailed aboard the vessel in nearly three decades, visiting popular ports of call throughout the Caribbean, The Bahamas, and Cuba. In August 2005, the ship was chartered as housing for Gulf Coast residents impacted by Hurricane Katrina, as well as relief workers in the region devastated by the Category 5 hurricane.

Now, the vessel’s days have ended, but she will always be fondly remembered by those who enjoyed her intimacy, amenities, neon-adorned Grand Atrium, three daring waterslides, and fun activities in sensational ways. 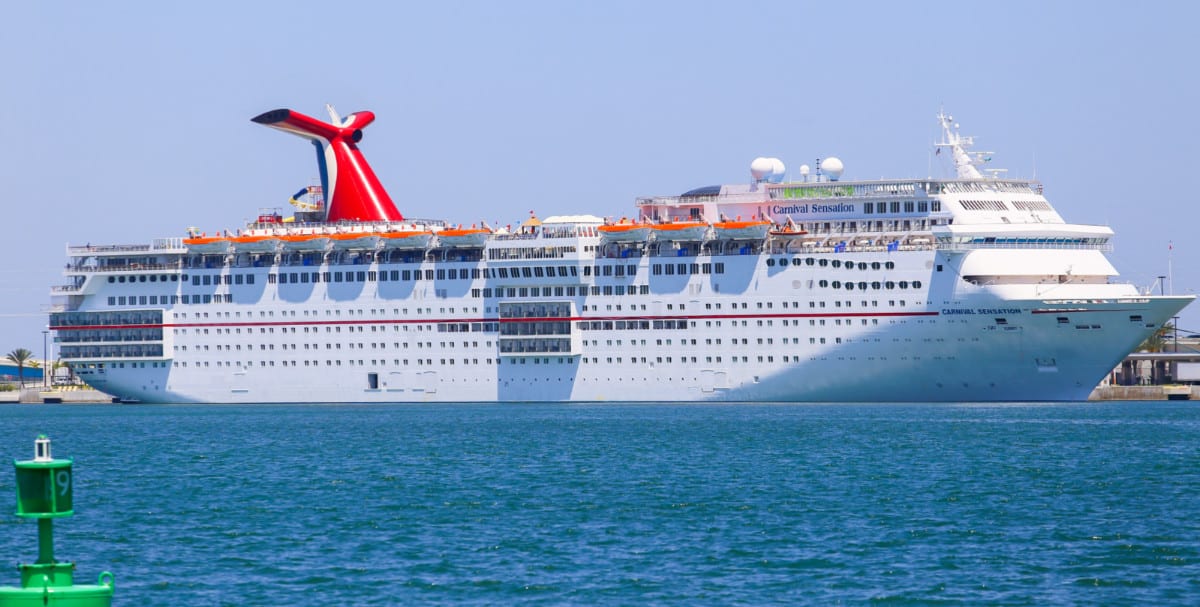