Let's find out more about the legendary Plastic Ship on a Stick from Carnival Cruise Line. A trophy prize which guests can win during their cruise vacation with Carnival.

It’s the ultimate souvenir of a Carnival cruise – the lustrous gleam of gold-tinted plastic, the fine lines of a molded ship model, the shimmer of the ship’s name on an embossed plaque – it’s the 24-karat gold plastic ship on a stick. But how can you get one of your own to commemorate your fantastic Fun Ship cruise?

About the Carnival Trophy

The ship on a stick trophies are well known to Carnival cruisers, but how much do you actually know about them? These souvenirs are manufactured by MDR Industries, a division of MDR International, Inc. This is the same company that creates the iconic molded plastic hurricane drink glasses that are so popular not only on cruises, but also at many hotels, nightclubs, and resorts worldwide.

The company also creates other trophies, drinkware, and souvenirs for the travel and cruise industry.

The ship itself is molded plastic with moderate detail showing the general shape of the ship’s decks, funnel, lifeboats, radar gear, balconies, portholes, and even the main Lido deck pool. The laurel branches and ship are colored gold, though the shades can vary from different manufacturing batches and occasionally may even seem as light as silver.

The class of the trophy ship is relatively indeterminate because the details are not so fine as to be modeled after one specific ship, but it most closely mirrors the Conquest class of ships in shape and features.

The models have changed over the years and may yet change again as Carnival Cruise Line continues to debut new ships, but the same trophy is used throughout the fleet, no matter which class of ship you sail on. When the models are in transition, however, different ships may be offering slightly different models until their supplies are replenished.

Each Carnival ship does carry a unique touch on its trophies, however, as each trophy has a plastic nameplate affixed to the front with the name of the ship where it is awarded.

Winning Your Own Ship on a Stick

These amazing trophies may seem rare, but they aren’t too difficult to get if you actively participate in all the cruise has to offer. While only one trophy is generally given out per event, they are awarded as first prize for a variety of great games and activities, including most trivia contests, ping-pong tournaments, basketball shootouts, game show events, scavenger hunts, bean bag tosses, dance contests, drawing contests, newlywed games, and more.

If there are two first place winners in the event, the crew member hosting the game may give out trophies to both high achievers.

And if you don’t win? A cruise vacation – especially a Carnival cruise – is all about the fun, and often if you politely ask the crew member hosting activities, they may have an extra trophy to give away, especially as a souvenir for a child. Many experienced cruisers also sell these trophies on eBay if they’ve won several from the same ship.

If you are lucky enough to win a cruise ship trophy, be a good sport – don’t try to win more, and let someone else have the glory of taking home first prize.

While crew members won’t stop you from taking the top honors at every trivia or other contest, you will start to be recognized and even resented if you’re a gloating victor.

Instead, keep your scores private and smile at the joy someone else has as they win their very own Carnival ship on a stick. If you do score multiple trophies but don’t want to be seen as usurping all the top titles, try giving away the trophies to other participants, such as the second place team, an excited child, or anyone else who admires the trophy but doesn’t have one of their own.

The biggest win of all, however, is not the trophy, it’s all the great fun you have and the memories you make as you join in different cruise activities in search of your own ship on a stick. On a Carnival cruise, everyone is a winner – with or without the trophy! 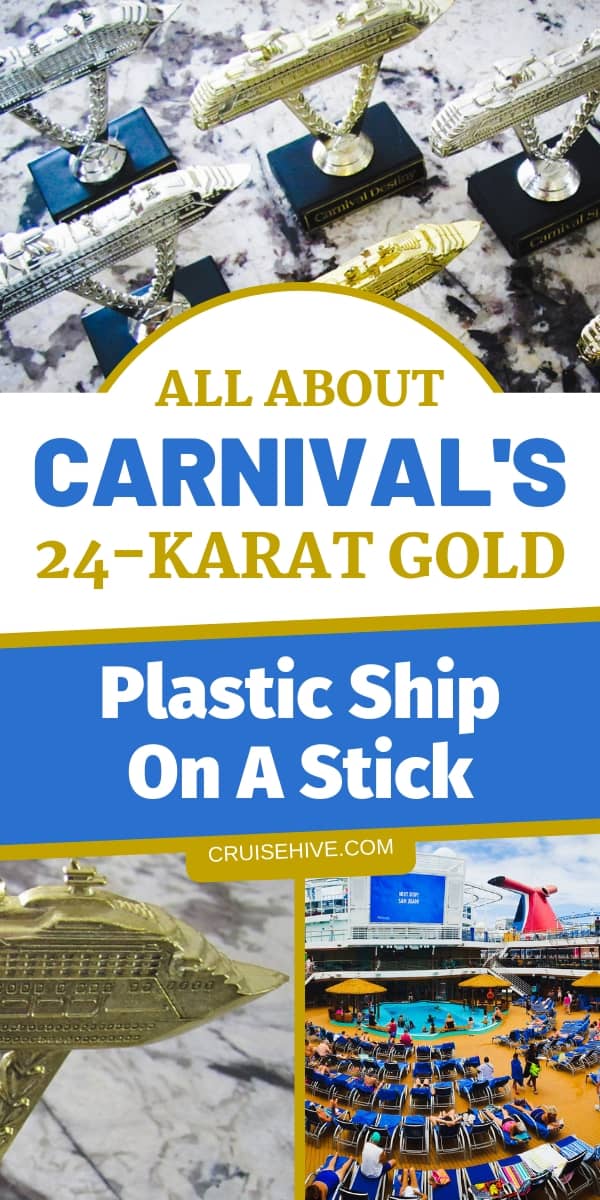 Melissa Mayntzhttps://www.melissamayntz.com/
Avid, enthusiastic cruiser (28 cruises and counting!), having sailed on multiple cruise lines, 18+ different ships in a variety of classes, and visited more than 15 ports of call in more than 6 countries, including Caribbean, Mexican, and Hawaiian ports. Widely traveled on multiple continents, as well as a professional freelance writer and editor with more than 18 years experience and thousands of articles published. Find out more about us here.