10 Things You Need to Know About Southampton Cruise Port

Everything you need to know about the Southampton Cruise Port in the UK with travel tips to help you before your cruise vacation.

Located in Hampshire, on the south coast of England, Southampton’s four cruise terminals are just one area of this busy and historic port. Southampton is the largest passenger port in the UK, operating regular ferries to the Isle of Wight as well as cruises. It is also the second largest deep-water cargo port in the UK after Felixstowe, so naturally its waters are always busy with vessels arriving and departing.

1. Where is Southampton Cruise Port?

Southampton cruise port is 80 miles southwest of London on the south coast of England. The port waters are sheltered as it sits at the confluence of two rivers: the Itchen and the Test, which merge into Southampton Water. The port is about 5 miles from the Solent, a stretch of water lying between the Isle of Wight and the UK mainland.

This unusual location with its distorted tidal flow means that Southampton Water has a double high tide, a big asset when moving large ships in and out of harbour. This also means that every vessel must have a local pilot onboard when entering and leaving Southampton Water.

The port has excellent road and rail links to major cities all over the UK.

The Port of Southampton has many claims to fame. It was the main departure point for the Normandy Landings on D-day in 1944, the fated RMS Titanic sailed from Southampton in 1912 and it was home port to the elite Cunard Shipping Line with their luxurious Transatlantic “Blue Riband” liner, RMS Queen Mary, and later RMS Queen Elizabeth making weekly sailings to and from New York City.

It handles 500 ship calls and 2 million cruise passengers every year. It has four dedicated cruise terminals:

Southampton was a significant natural port as long ago as the Norman Conquest in 1066 and was a point of departure for the Mayflower pilgrims as they set sail for a new life in America in 1620. In 1835, the Southampton Docks Company was formed and the first dock opened in 1842 with rail links to London. The Thornycroft shipbuilding yard flourished from 1904 to 2004, building and repairing ships.

As long ago as the 1840s, Southampton was the departure port for luxury P&O cruises and it has since welcomed ships from all the main cruise lines.  Many Cunard ships are christened in Southampton, most recently MS Queen Victoria (2007) and MS Queen Elizabeth (2011).

P&O celebrated its 175th anniversary in Southampton Port in 2012 with the arrival of all 7 world-class liners dropping in throughout the day (Adonia, Arcadia, Aurora, Azura, Oceana, Oriana and Ventura). They departed from Port Southampton in a stately procession waived by crowds of well-wishers in traditional cruise style.

In 2015 it was the turn of Cunard to reach their 175th anniversary milestone in Southampton Port. It was marked by the presence of all their flagship liners: Queen Mary 2, Queen Elizabeth and Queen Victoria.

Many other cruise ships include Southampton on their maiden voyage as a prestigious port of call. The inaugural visit will be marked with the presentation of a plaque from Port Southampton.

4. Facts and Figures About Port Southampton

The official address of Port Southampton is:

Today, Port Southampton is owned and operated by Associated British Ports (ABP). It handles over £75 billion of cargo including vehicle exports and around one million TEU containers each year.

The port covers 375 acres for its commercial and cruise operations and a further 210 acres occupied by the container terminal. It has seven multi-storey car parks for import and export of vehicles (Southampton is the UK’s leading port for vehicle exports) and 53 acres of above-ground storage as well. It’s huge!

The port also handles bulk cargo including perishable food and produce, wheat, rock, gravel, fertiliser, grains and scrap. There is a separate oil refinery (Esso) at nearby Fawley which has a mile-long terminal managing 2000 ship movements and 2 million tonnes of crude oil, some of which is refined and piped direct to Heathrow Airport.

If you cruise out of Southampton cruise terminal, you can see this vast refinery on the starboard side before you reach the Solent.

In 2020, Southampton cruise terminal expects to introduce shoreside power for all cruise ships, allowing a much cleaner eco-friendly process for the port. Once docked, cruise ships will connect up to onshore power from the grid rather than running their diesel engines or gas turbines.

Southampton cruise port has two docks (Eastern and Western) with four berths and four passenger terminals. The cruise port is at the tip of the docks with the River Itchen on the eastern side and the River Test on the western side. As soon as cruise ships leave their berth, they are in Southampton Water.

The cruise terminals all have deep-water berths and channels with no restrictions on length or tonnage. The unusual tidal flow provides 17 hours per day or rising water with a modest range of about 1.5 metres or 5 feet. This allows even the largest vessels to enter and leave the port up to 80% of the time.

Southampton is home port to some of the largest and most luxurious cruise lines and world-famous ships including:

Port Southampton is also a popular port of call for ships of other cruise companies, including:

Iceland and Greenland; the Norwegian Fjords and Baltic Sea; the Mediterranean; Iberia and Gibraltar; the Canary Islands; Black Sea to Turkey, Bulgaria, Ukraine and Russia; Transatlantic cruises (either seasonal repositioning or aboard the majestic QM2.

9. Getting to Southampton Cruise Terminals

There are several ways to reach Southampton cruise terminals from London airports or elsewhere in the UK. Bear in mind, if you arrive by private car, you will need to arrange cruise parking for the duration of your trip. Other options may be easier and cheaper.

Cruisers can book a transfer from London to the Southampton cruise port ready for a cruise vacation.

Cruise lines sailing from Southampton usually offer cruisers the chance to book transport from main hubs such as London, including Heathrow Airport. Depending on the number of cruise passengers booking the transfer, the journey will be by shuttle van or minibus. Price is per person, so for a family it may not be the cheapest option.

You can book a transfer from the Port of Southampton to the Hotel or Airport right here.

However, the advantage of being picked up and dropped off right at the ship without having to worry about navigating could be worth paying a little more for. At least the ship won’t sail without you if you’re using official transportation and there’s a traffic problem!

Driving to Southampton is straightforward from the M25 (London and the southeast) and M3 or via the M4 and A34 from Birmingham and Wales. Head for the M27 and take Junction 3.

From there, the route is signposted with a dual carriageway heading to your assigned dock gate. Allow at least 2 hours from Central London, depending on the time of day and traffic.

Trains run to Southampton from all over the UK. If you’re staying in Central London there are regular trains from Waterloo and Charing Cross stations with South Western Railway.

A direct express train will take about 90 minutes, but if you need to change trains at Basingstoke, for example, the journey will naturally take longer. You will need a taxi to transfer you the last 2 miles from the railway station to the cruise port.

National Express runs scheduled coach services to Southampton from London (Waterloo Station), Heathrow, Gatwick and most major cities. This is the cheapest way to get to Southampton, with single tickets as low as £9.80 in off-peak times.

However, you will need to make your own way to the cruise port from the bus station (about 1.6 miles) where the coach journey terminates.

Book a taxi or Uber and enjoy door-to-door service from your home or hotel to the cruise terminal.

Book a car and driver service or even a limousine and start your cruise in style. As it is a personal service, you can expect help with your luggage and can make stops along the way by prior arrangement with your driver. If you have enough time, you can stop for a leg-stretch at sights such as Stonehenge or drive through Windsor and see the castle

If you are spending time in Southampton before, during or after a cruise, there are plenty of things to do. The Old Town has mediaeval buildings and museums. Follow the Titanic Trail to the Maritime Museum at Town Quay or enjoy the Jane Austen Walking Trails of her favourite haunts.

Further afield are the New Forest National Park, Stonehenge and the pretty Isle of Wight.

How to get from London to Southampton cruise port?

Southampton cruise port is 80 miles southwest of London. The journey by road (car, taxi or direct coach) takes about 1 hour 50 minutes, but heavy traffic at rush hour around London makes the journey much longer.

Other options include cruise shuttle transfers booked direct with your cruise line. These are usually by shuttle van or mini bus for small groups of 4 to 8 people. Price is per person, so for a family it may not be the cheapest option. However, the advantage of being picked up and dropped off right at the ship could be worth paying a little more for.

South Western Railway trains regularly run to Southampton from Waterloo and Charing Cross stations. It takes about 90 minutes. You will need a taxi to transfer you the last 2 miles from the railway station to the cruise port. National Express runs scheduled coach services to Southampton from London (Waterloo Station), Heathrow, Gatwick and most major cities.

This is the cheapest way to get to Southampton, with single tickets as low as £9.80 in off-peak times. However, you will need to make your own way to the cruise port from the bus station (about 1.6 miles) where the coach journey terminates.

Which cruise lines are based out of Southampton, UK?

How busy is the Port of Southampton?

Port Southampton is the largest passenger port in the UK (cruises and ferries) and the second largest deep-water cargo port in the UK. ). It handles over £75 billion of cargo annually including vehicle exports and around one million TEU containers each year. As well as being home port to 5 major cruise lines, it handles 500 ship calls and 2 million cruise passengers annually. 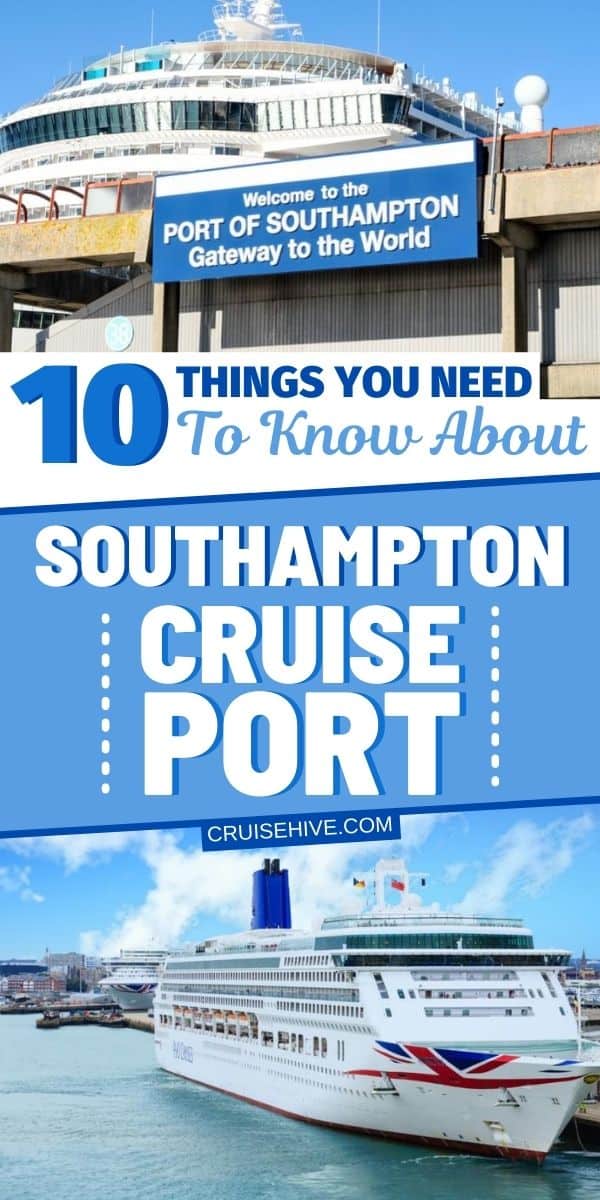