Don't make this major mistake on your next cruise vacation. Here are 6 top videos of cruise passengers missing the ship.

We’ve all seen these videos of cruise ship passengers missing the ship. Over the years many of them have gone viral but no matter what, some cruisers never learn! Here at Cruise Hive, we’ve come across lots of videos so have decided to compile six videos of passengers missing their ships which we think are worth watching. Who knows, we might even learn from this!

Here are the videos in no particular order:

It Will Turn Back!

We reported this all the way back in December 2014 and it’s right up there with the all-time greats. After just missing the Norwegian Sky by seconds in Nassau Bahamas the man is filmed running down the long pier to try to get the ship to come back. He puts his bags down so he can focus on getting the ship to stop. Waving his arms and shouting as the NCL ship gets further and further away from the pier.

Partner Waits With No Luck

This video is more serious and reminds us it can be a worrying time if a loved one never makes it back on board in time. In this footage, a woman is seen waiting for her partner who is nowhere to be seen.

Sadly he never makes it back and as a result, she also must stay in port to make sure nothing has happened. This happened on a more recent sailing in September 2015 on Royal Caribbean’s Anthem of the Seas.

Leaves The Kids Onboard

This is one of the most popular cruise passenger videos missing the ship in recent times. The original video which Cruise Hive first reported on back in April has received over a Million views but that doesn’t include all the copycat videos and television network coverage.

Not long after the video went viral and the entire world was posting about it, it was known that her kids were onboard with their uncle so all was good. The woman’s husband was also with her on the ship pier Nassau, Bahamas.

The Phone Also Misses The Ship!

We don’t know too much about this video but according to the user who uploaded it the cell phone and a cruise ship passenger missed the ship. The user posted “A guy left his cell phone on the bus. His pal decides to bring it to him but the cruise ship was pulling away. He had a great idea to throw it to someone on the balcony, but his lack of throwing skills made for a good laugh!”By the way

By the way, never try and throw something to the ship as it could end badly!

For once this woman missing the ship wasn’t in Nassau, Bahamas! In Ketchikan, Alaska a woman missed the Carnival Legend by 38 minutes so there was no way it would wait any longer. The woman was walking fast along the pier and shouted out “hey! hey! hey! hey! come back! come back!” unfortunately, the vessel didn’t come back.

These guests missed the Carnival Valor in Nassau, the Bahamas in December 2012. The Conquest class ship which is operated by Carnival Cruise Line waited 30 minutes for them to come back but couldn’t wait any longer. The passengers are seen running along the pier waving their arms.

Just remember to always stay on ship time and double-check it before getting off in port. Always make sure your back on the ship well before the back onboard time which is usually 30 minutes before departure. Plan your day in port and don’t do everything last-minute.

If you want to watch more cruise related videos then we’d love to have you subscribe to us over at YouTube where we post new videos almost daily! 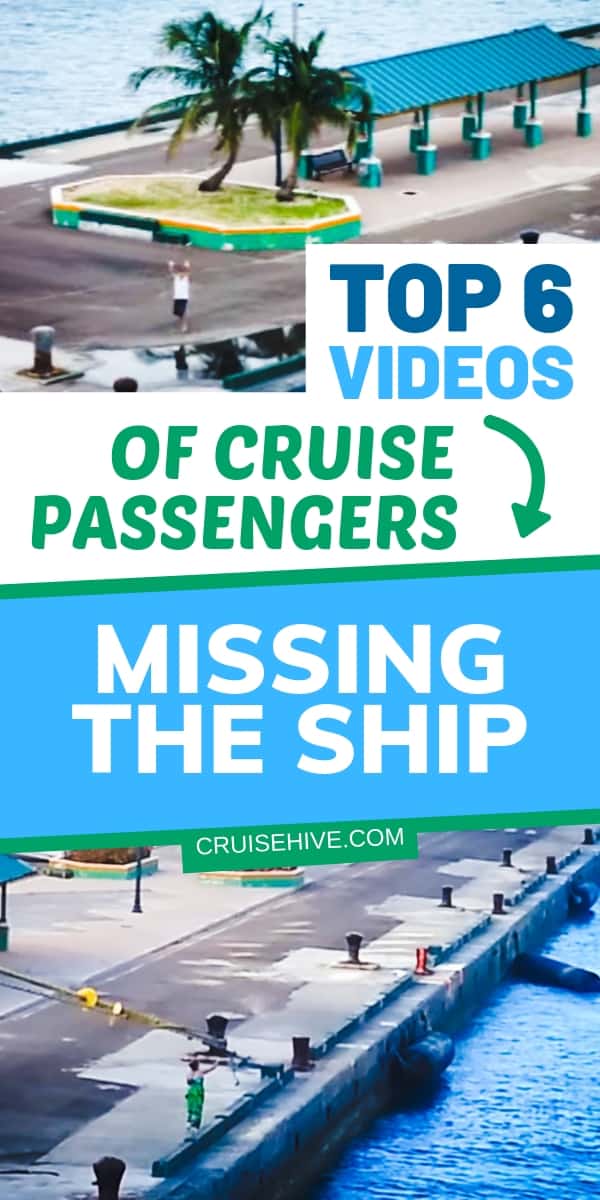