The July 5th sailing on the Norwegian Sun cruise ship has been canceled as a precautionary measure after hitting an iceberg. 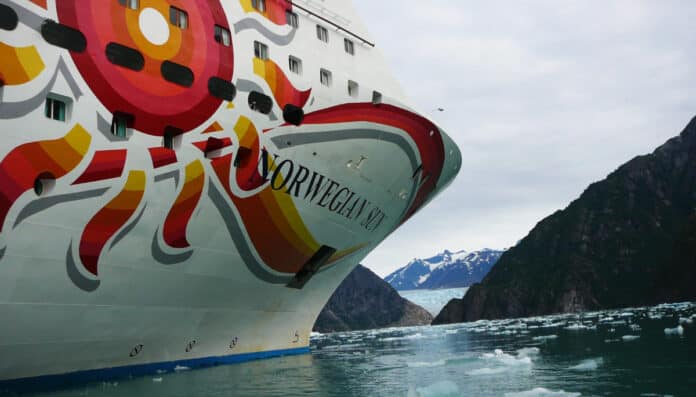 The accident between the Norwegian Sun and a growler in Alaska has an even more significant impact than initially expected. Besides canceling the voyage during which the vessel hit the iceberg and the sailing due to depart yesterday, June 30, the July 5 cruise has now been canceled.

Although the vessel sustained only minor damage, and the hull had not been breached, repairs will take some time, with the cruise line taking precautionary measures.

Guests booked onboard the July 5 sailing for Norwegian Sun have been informed their voyage has been canceled. This follows the collision between the Norwegian Cruise Line ship and a growler near Hubbard Glacier, Alaska, on June 25.

Norwegian Cruise Line had already been forced to cancel the voyage during which the vessel hit the growler and a subsequent cruise due to depart on June 30.

Norwegian Sun only arrived back in Seattle on Thursday. The ship returned to Washington State with reduced speed from Juneau, where the cruise line and the US Coast Guard assessed the damage.

Katty Byrd, Senior Vice President of Guest Services, states the following: “During the afternoon of June 25, 2022, Norwegian Sun made contact with ice, while transiting to Hubbard Glacier in Alaska. All guests and crew are safe, and the ship was deemed safe to return to Seattle for further assessment and repairs.“

“However, as a precautionary measure, Norwegian Sun’s July 5, 2022, sailing has been canceled. We sincerely apologize for the inconvenience this may cause.“

While the collision certainly seemed significant, the Norwegian Sun did not suffer much damage from the crash. This can be deduced from the US Coast Guard allowing the vessel to return to Seattle with all guests onboard.

If the small iceberg had done too much damage, the Coast Guard would have ordered all guests and crew off the vessel until repairs had been made.

Guests To Be Reimbursed

With Norwegian Cruise Line canceling the sailing, guests can look forward to getting a full refund of all monies paid for the voyage, including a $300 reimbursement for any airline-imposed change/cancelation fees. Guests booked through a Future Cruise Credit (FCC) will be refunded 100% of the FCC used.

“Due to this unfortunate event, you will receive a full refund that will automatically be returned to the original form of payment provided at the time of your current reservation. If your most current reservation was paid via a Future Cruise Credit (FCC), 100% of the FCC used will be re-applied to your Latitudes account.”

In addition to the 100% refund or full return of the FCC, guests will receive an FCC valued at 50% of the voyage fare paid for the current sailing.

Is it Common for a Cruise Ship to Hit an Iceberg?

Norwegian Sun’s collision happened during heavy fog. The iceberg that the vessel collided with was a growler. These small icebergs are notoriously hard to spot, as the top of the berg is no more than a meter, or three feet, above the waterline.

Besides the size of the berg, most cruise ships hardly ever sail in areas where icebergs are expected, or if they do, they tend to stay well out of the way.

Those ships that do venture into icy conditions, such as expedition cruise ships sailing in the Arctic and Antarctic, have hulls designed to come into contact with ice and are equipped with equipment capable of detecting ice in the water.

So, there is no need to worry about your upcoming cruise, whether in Alaska, Greenland, Chile, or other areas where glacier cruising is a feature.

Another Rockslide in Skagway, Dock to Remain Closed for 2022