Travel and Transportation tips for cruisers for who are traveling from Seattle Airport to the Cruise Port with routes, different options and more.

Seattle-Tacoma (SEA) International Airport, commonly known as Sea-Tac Airport, is 13 miles south of downtown Seattle and a similar distance from the cruise port. Seattle cruises depart from different piers along the Elliott Bay waterfront so distances and ways of getting to your cruise ship from Seattle Airport depend upon which pier your cruise is departing from.

If you are cruising with Norwegian Cruise Line (NCL) or Oceania Cruises, they depart Pier 66 (Bell Street Pier Cruise Terminal). This pier is right on the waterfront a short walk from Pike Place Market and the downtown district. It is about 13 miles from Seattle Airport (14.5 miles if you use I-5) and the journey by road takes at least 30 minutes.

If you are cruising Carnival Cruise Lines, Celebrity, Holland America, Princess Cruises or Royal Caribbean cruise lines, you will be departing from Pier 91 (Smith Cove Terminal) which is at the north end of the Port of Seattle. It is 16 miles north of Seattle Airport (19 miles via I-5) and you should allow 36-48 minutes if you are traveling by road.

To further add to the complications, Port of Seattle is currently creating a new cruise terminal at Pier 46. This is at the south end of Elliott Bay and downtown Seattle. It is scheduled to begin to be operational for the summer 2020 cruise season. This brand new cruise terminal will take over serving most of the main cruise lines for cruises to Alaska and East Coast USA. It is 12 miles north of Seattle Airport and the journey by road takes about 25 minutes.

Whichever cruise terminal you need for your cruise departure, there are several options for getting to the pier from Seattle Airport, so let’s check them all out!

The easiest and possibly quickest way to get from Seattle Airport to the cruise port is by taxi, Uber or Lyft from the airport. A metered taxi ride would typically cost around $50 for the ride (not per person) so if you are traveling as a group, it can work out quite economically.

At peak times when the city traffic is heavy, the cost can be more. Remember to state which pier your cruise is departing from as there is about four miles difference between Pier 46 at the south end of Elliott Bay and Pier 91 at the north end.

As this is a private transport service, you can ask your driver to make any stops if you need to pick up snacks or drinks before checking in for your cruise. Drivers are also very helpful with handling your luggage which is particularly beneficial if you are disabled, elderly, traveling with children, or simply have a lot of heavy bags that need loading and unloading.

If you want to travel in comfort and luxury from Seattle Airport to the cruise ship, the ultimate way is by luxury limo or chauffeur-driven Town Car. Contact Starline Town Car and Limo Service to make a booking.

Groups of 7-30 passengers can book a private car service from the airport to the cruise port using a luxury SUV, van, minibus, stretch Limo or Hummer. These are also available from Starline Town Car and Limo Service.

Many cruise lines offer a cruise transfer service between Seattle Airport and the cruise port. However, this will only operate on the day of your cruise departure. It will be by shared coach or minibus and you will need to pre-book your seat with the cruise line ahead of time. Prices are not cheap. They are per person and typically range from $25 (NCL) to $79 (Oceania) with most cruise lines charging $27-$30 per person each way.

The Link Light Railway (Metro) has a stop at Sea-Tac Airport and runs to downtown Seattle and the University of Washington (UW). There are 14 stops altogether and the total journey takes 38 minutes (slightly less from Seattle Airport to downtown). Although it is cheap and convenient, the service involves some walking or a taxi service at either end and it could be difficult for those with heavy luggage.

After baggage claim in Seattle Airport, follow the signs for Link Light Rail. You will be directed across the Skybridge to the parking garage to reach the Link station about 1/4 mile distance. For those who have mobility issues, there is a free electric shuttle that runs between the airport and the Link station. If you require a wheelchair, call Prospect Airport Services on 206-246-1550 and arrange a personal wheelchair service ahead of time.

Link offers a regular service, running trains every 6 minutes at peak times and every 15 minutes in quieter times. It operates from 5am to 1am Monday through Saturday and 6am to midnight Sundays.

Fares are very modest, ranging from $2.25 to $3.25 one-way, depending on the distance traveled. Seniors and disabled fares are $1 for all trips.

You can book tickets ahead of time using the Transportation app or simply pay cash when you board. The driver does not carry change, so have some small denomination notes with you. The fare is currently $3 per person.

Get off at University Street Station on 3rd Ave which is close to Pier 66 Bell Street Cruise Terminal or Pioneer Square which is just a short walk from the new Pier 46 cruise terminal.

If you are flying into Seattle Airport ready for your cruise, you will probably want to arrive a few days early to avoid any possible delays that may cause you to miss your luxury cruise to Alaska.

Why not book a night or two in a hotel in downtown Seattle close to the cruise terminal? Many hotels offer a free airport shuttle service to meet you on arrival at the airport and transport you and your luggage to the hotel using a courtesy bus.

Check out some of the best hotels in Seattle for cruisers and choose a hotel that is convenient for your cruise departure, which may be from from Pier 91 (Smith Cove Cruise Terminal) or the downtown Pier 66 (Bell St Cruise Terminal) depending on which cruise line you are sailing with.

Some hotels such as the Edgewater Hotel are right on the waterfront on Elliott Bay, just a few steps from the cruise ships. You can easily walk the short distance from the hotel to the cruise check-in towing your own luggage as it is almost as close as the taxi drop-off point.

You may prefer to choose a hotel in downtown Seattle that offers a courtesy shuttle service to and from Seattle Airport. Hyatt Place Seattle and the Inn at the Market are well-located hotels in downtown Seattle with a shuttle service for guests. You can enjoy all the fun and experience on offer around the hotel, such as shopping, dining,  bars, entertainment and cultural attractions such as visiting Pike Place Market.

When it’s time to head to your cruise ship, you can book a hotel shuttle transfer or get a taxi or Uber for the short journey to the cruise port. If you are cruising out of Pier 66 (Bell Street Cruise Terminal) on the waterfront, the journey is about one mile. Pier 91 is a little further away but the taxi or Uber ride will take less than 15 minutes, even in city traffic.

If you are cruising out of the new Pier 46 Cruise Terminal, consider staying at a hotel near Seattle Airport. Accommodation is generally cheaper than in the downtown district. If the hotel does not offer a courtesy shuttle service to downtown Seattle, you can use a taxi, Uber or hop aboard the Link Light Railway. Get off at University Street Station on 3rd Ave which is close to Pier 66 Bell Street Cruise Terminal or Pioneer Square which is just a short walk from the new Pier 46 cruise terminal.

Seattle Airport and the Port of Seattle offer a useful PortValet service for cruisers when they disembark. Their luggage can be transferred directly from the ship to the airport and will be checked-through to your final destination (USA airports and certain airlines only).

If you want to take advantage of this free Port Valet service, you must apply during your cruise by filling in the form in your stateroom or at the Guest Relations Desk. On the final night of your cruise your luggage tags and boarding pass will be delivered to your stateroom. Leave your labeled bags outside the cabin door for collection and transfer to the airport. They will be checked through to your final destination and the next time you see your bags will be on the airport carousel.

This excellent service allows you to enjoy exploring downtown Seattle attractions before you head to the airport without having your luggage with you.

What is the best airport to fly into Seattle?

The nearest airport to Seattle, WA is the Seattle-Tacoma Airport (IATA Code SEA), usually referred to as Sea-Tac Airport. It has flights to most U.S. cities, Europe, the Middle East and Asia and is the primary hub for Alaska Airlines.

What is the name of the airport in Seattle, Washington?

How far is the Port of Seattle from the airport?

Distances from Seattle Airport to the Cruise Port of Seattle vary depending on which cruise terminal you are departing from.

Pier 46 (currently under development) is 12 miles from Seattle Airport. The journey by car takes about 18 minutes.

What is the cheapest month to fly to Seattle?

Flight prices vary according to seasonal demand. High season is in the months of June, July and August when flights are most expensive. The cheapest month to fly to Seattle Airport is January, although there are no Alaska cruises departing at that time.

What is the cheapest way of traveling to Seattle Cruise Port?

The cheapest way to reach downtown Seattle is using the Link Light Rail service from Seattle Airport. Board it at the metro station in the airport parking garage. There is a stop at Westlake Station which is about one mile from Pier 66 Bell Street Cruise Terminal.

If you are departing from Pier 91 Smith Cove Cruise Terminal you can get off at University Street Station and get a taxi for the remainder of the journey (about 3 miles). The nearest Light Rail Station to the new Pier 46 cruise terminal is International District/Chinatown Station with a 0.6-mile walk or taxi ride to the cruise ship.

As a guideline, fares vary between $2.25 and $3.25 for a one-way ride and the journey takes about 35 minutes. Link Light Rail runs regularly every 15 minutes (more frequently at busy times) and the service operates from 5 am to 1 am. 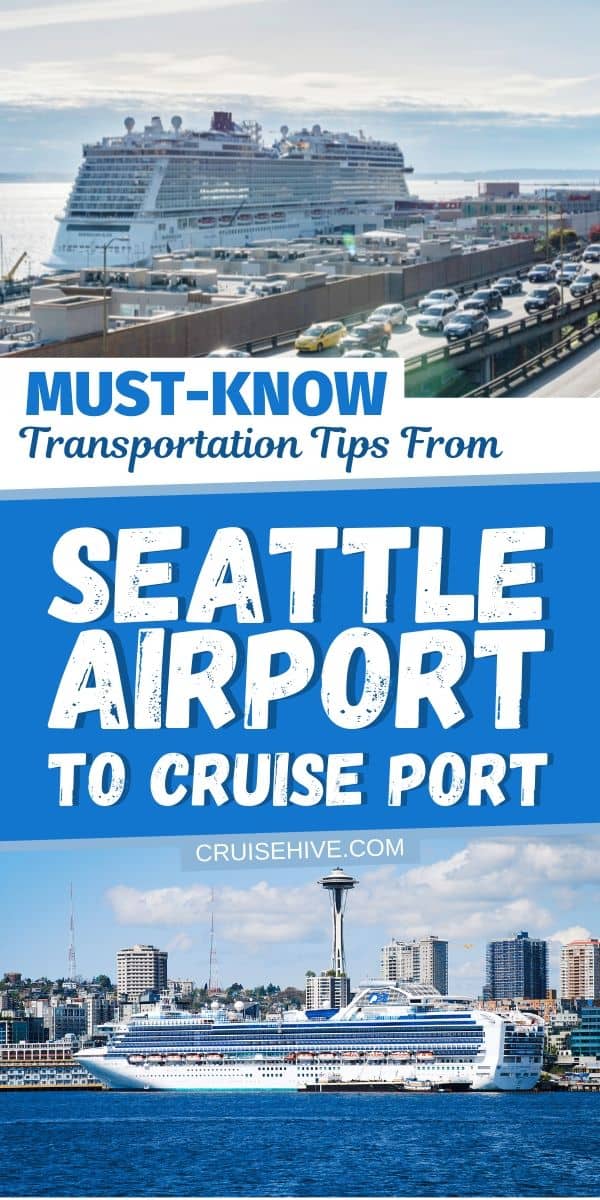