Harmony of the Seas is “Best Large Cruise Ship” of 2017

Royal Caribbeans Harmony of the Seas wins “Best Large Cruise Ship” of 2017 and got more votes than other large vessels in the industry.

Harmony of the Seas is operated by Royal Caribbean and the ship has just won “Best large Cruise Ship” in the 2017 Cruise Ship Awards. Cruise Hive readers have been voting since September and they have chosen the third Oasis-class ship which is also currently the worlds largest cruise ship. Read more about Harmony of the Seas right here.

The Royal Caribbean cruise ship didn’t win by much, Carnival Vista which is the largest ship from Carnival Cruise Line was just a few votes away but ran out of time! Harmony of the Seas joined the Royal Caribbean fleet in Spring 2016 and is an impressive 226,960 and can carry over 5,400 passengers at double occupancy.

As expected with a cruise ship this size it has all the features to keep any type of cruiser busy during the entire voyage. One highlight is the Ultimate Abyss which is an industry first and came second in this year’s “Best Cruise Ship Feature” on Cruise Hive.

Harmony of the Seas had some tough competition in the “Best Large Cruise Ship” category. The ship was up against other large vessels from Carnival Cruise Line, MSC Cruises, Norwegian Cruise Line and Cunard Line. We tried to keep it fair by not more than one ship from the same cruise line.

In a close 2nd place came Carnival Vista, the newest Carnival ship which joined the fleet in Spring 2016. The ship is 133,500 gross tons and introduced the first ever SkyRide and IMAX Theater at sea. The SkyRide feature also just won “Best Cruise Ship Feature” of 2017. The Carnival cruise ship has a passenger capacity of over 3,900 at double occupancy.

In 3rd place came Norwegian Escape which is operated by Norwegian Cruise Line and joined the fleet in 2015 as the first Breakaway-Plus class ship. The NCl vessel has been a popular choice for cruisers out of PortMiami at the moment.

In 4th position came one of the most iconic cruise vessels in the world, Queen Mary 2. This ship which is operated by Cunard Line has long been a favorite of cruisers all over the world. When the ship first began sailing in 2003 it was the largest cruise ship in the world at 150,000 gross tons but now it is the 10th biggest!

In the last and final 5th place in the 2017 Cruise Ship Awards was MSC Meraviglia which only began service in 2017 and is the largest ever MSC cruise ship so far at 167,600 gross tons and carrying over 4,400 passengers at double occupancy. More even larger cruise ships from MSC are on order.

With thousands of votes from Cruise Hive readers, we must say thank you to you all for taking the time to vote. This is the 4th Annual Cruise Ship Awards and since September voting had been open. We’ve taken away multiple votes from the same IP and checked to make sure voting is accurate.

Congratulations to Royal Caribbeans Harmony of the Seas cruise ship for winning “Best Large Cruise Ship” and we hope cruisers continue to enjoy the ship even if sister ship Symphony of the Seas will be slightly larger when she arrives in March 2018. 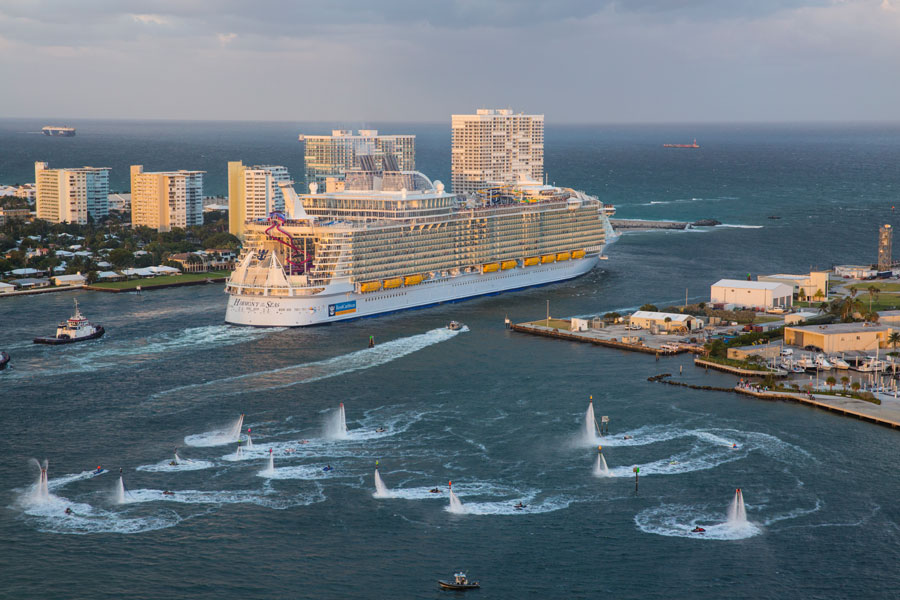