Crane Collapses on One of World’s Largest Cruise Ships

A crane has collapsed on Oasis of the Seas in the Bahamas. The cruise ship is operated by Royal Caribbean and one of the largest in the world.

A large crane has collapsed onto the Oasis of the Seas cruise ship during a routine dry dock at the Grand Bahamas Shipyard in Freeport, Bahamas. Eight people have been injured.

As seen in a video posted online, the crane has caused the 220,900 gross ton ship to list towards its starboard side. The crane collapsed onto the aft of the ship where the AquaTheatre is located.

The cruise line released a statement to Local 10:

“We are responding to a construction site incident at the Great Bahamas Shipyard, where Oasis of the Seas is currently in dry dock.”

“As of 1:45 pm EDT, we are accounting for the whereabouts of all site personnel and working with local authorities to determine if there have been any injuries. We are aware of damage to the dock structure and to construction cranes. We are assessing damage to the ship.”

In a video posted by the Bahamas Press, a worker mentioned that Dock 2 is gone and it is a “big disaster.” The emergency services have also been seen attending as there have been injuries.

The only people onboard a ship during a dry dock would be a limited number of crew members and shipyard workers. Royal Caribbean released another follow-up statement with further details:

Earlier today, we responded to a site incident at the Grand Bahamas Shipyard, where Oasis of the Seas is currently in drydock.

Shipyard management has informed us of eight injuries, none of them considered life-threatening.

We are aware of damage to the dock structure and to construction cranes. We are assessing damage to the ship. Drydock is a maintenance procedure, and there are no guests aboard the ship.

Police nor our teams on the ground can confirm if anyone has been injured… pic.twitter.com/mQ6QXYa3Hw

Oasis of the Seas, which was once the largest cruise ship in the world when she entered service in 2009, only just entered the dry dock for routine maintenance. The ship was set to be fully upgraded and ready for a new summer service of Mediterranean cruises out of Barcelona, Spain, starting in May 2019.

The ship has a guest capacity of 5,400  at double occupancy along with 1,650 crew members. While in dry dock, however, the full crew is typically not on board, as many are transferred to other ships in the fleet or begin their vacation during the renovation.

It’s not clear if the ship’s larger dry dock later this year or any upcoming sailings will be delayed. This is developing news and we’ll keep Cruise Hive readers updated as new details come out. 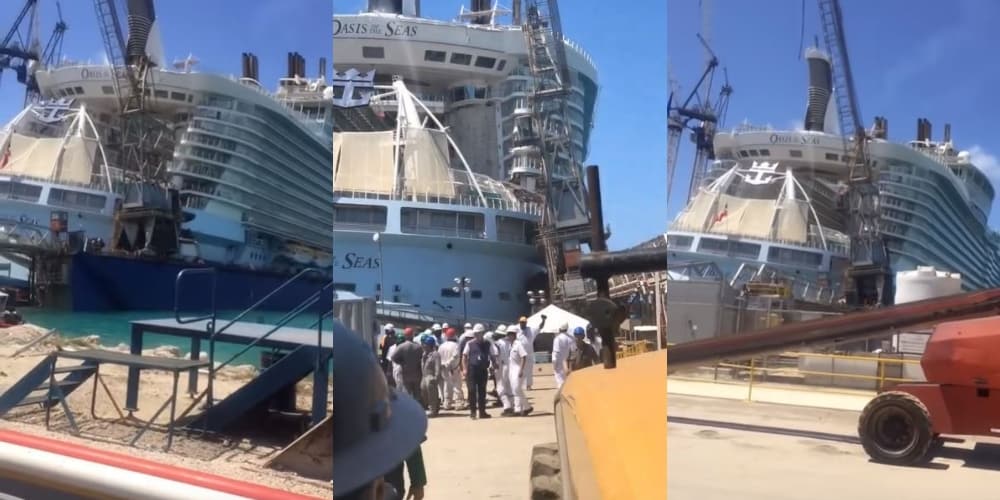