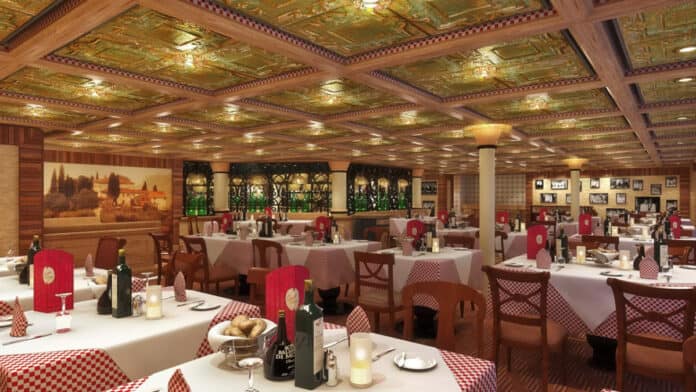 With Cucina del Capitano coming in with the most votes for first place, it was much closer behind. Norwegian Cruise Line’s Cagney’s Steakhouse just marginally received more votes than third place Jamie’s Italian, featured on Royal Caribbean cruise ships.

Voting in this year’s awards began in September, with Cruise Hvie readers able to cast just a single vote in each of the eight categories. In this specific category, readers could type in their nominations so that all specialty dining venues would have a chance of winning. Any suspicious votes and repeats from the same IP were not counted.

This now makes the second award that Carnival Cruise Line has won. The Miami-based cruise line already came out on top with its Mardi Gras vessel becoming the Best Overall Cruise Ship of 2022.

What is Cucina del Capitano?

Guests can expect to enjoy well-known Italian dishes such as Pollo Parmigiana Della Cucina, Linguino, Cavatelli, and more. Each ship also features a signature dish “inspired by the Captain’s treasured family recipe that’s been handled down for generations,” as mentioned on the menu.

Currently, the specialty dining venue is featured on 10 Carnival cruise ships, including Carnival Breeze, Carnival Celebration, Carnival Horizon, Carnival Magic, Carnival Panorama, Carnival Radiance, Carnival Sunrise, Carnival Sunshine, Carnival Vista, and Mardi Gras. Guests are not required to make a reservation, but it’s recommended to do so before the cruise in case the venue fills up.

Cucina del Capitano is not part of the cruise price and costs an additional $18 per adult and $6 for kids 11 years old and under. However, there is no cost on the new Excel-class vessels, including Mardi Gras and the new Carnival Celebration. There will also be no cost when the New Carnival Jubille debuts in 2023.