7 Carnival Cruise Ships Will Be Upgraded in 2019

Take a look at the Carnival cruise ships which will undergo a dry dock in 2019. Some are more for maintenance and some are major upgrades with many new features. Just another busy year for the cruise line!

It’s going to be a busy year for Carnival Cruise Line with seven ship dry docks including a major transformation of Carnival Triumph into the Carnival Sunrise.

There are seven ships scheduled to undergo dry docks in 2019 including three Fantasy-class vessels, one Spirit-class ship, one Conquest-class ship, the Carnival Splendor and the biggest upgrade in years which will be the Carnival Triumph transformation.

Carnival Fantasy is the oldest ship in the fleet at the moment and she will also be the first to get an upgrade in 2019. The dry dock will take place from January 7 and be completed on January 20.

Nothing major is expected during the upgrade. Most of the attention will be done on maintenance and technical aspects. However, we could likely see modern fixtures in staterooms and adjustments to some public venues. The last dry dock for Carnival Fantasy was in 2016 and many of the FUN 2.0 features were already added. An Alchemy Bar wasn’t among the upgrades so that could be added in 2019.

Carnival Pride will be the only Spirit class ship getting some attention in 2019. The dry dock will take place from February 3 to February 16.

All the FUN 2.0 features were already added in the 2014 upgrade so for the upcoming one just expect lots of maintenance and a modern touch to public spaces.

Carnival Freedom will be the second biggest ship to receive a refurbishment in 2019. The dry dock will take place from February 13 to March 3.

Carnival has not yet revealed what will be done during the dry dock but as usual, maintenance will be done, new carpeting, tiles, decor, and updates to the staterooms.

This will be the biggest dry dock transformation since Carnival Destiny transformed to Carnival Sunshine in 2013. The ship will be known as Carnival Sunrise after a huge multi-million dollar makeover. The dry dock will be from March 1 to April 28 which is almost two months and take place in Cadiz, Spain.

There will be plenty of new features added onboard which have already become popular on more modern ships in the fleet. One of the highlights is a new Guy’s Pig & Anchor Bar-B-Que Smokehouse casual eating venue and the ever popular RefFrog Pub. You can read about everything which will be added and more details right here.

Carnival Sunrise will begin sailing 5-day to 7-day cruises out of Norfolk, Virginia starting on April 29, 2019.

Carnival Ecstasy will be the second Fantasy-class vessel of the year to be upgraded. It’s too early to know what will be done during the dry dock but expect a new shiny coat of paint, carpeting, modern touches to staterooms and a lot more.

The refurbishment will begin on October 5 and end on October 16. The older class ships are much smaller than the newer ships you see from Carnival Cruise Line. Space needs to be used wisely making sure a great vacation experience can be offered and still be able to provide the latest features.

The last dry dock was in 2017 which added the Alchemy Bar, Guy’s Burger Joint, and other popular FUN 2.0 features.

Carnival Imagination will be the third Fantasy-class ship to be upgraded in 2019. It is still too early to know what will be done but as usual, there will be maintenance and enhancements to public areas. Staterooms usually get refreshed too. The dry dock will take place from October 20 and be completed on November 2.

Carnival Splendor will be the largest Carnival ship of the year to receive an upgrade. She is in a class of her own and will be redeployed to Australia starting in December 2019. Before her new service from Sydney, the 113,300 gross ton vessel will under a major dry dock starting on October 30 and ending on November 24, 2019.

We’re expecting some major new features to be added so she is already for the Australian market. A thrilling new waterpark will be added along with the latest FUN 2.0 features such as Guy’s Burger Joint, RedFrog Pub and more. The cruise line will be announcing more details about the specifics in the coming months. For now, do read our full article about this by clicking here.

It will be busy indeed with the cruise line also welcoming Carnival Panorama at the end of the year. Do keep checking Cruise Hive for more specific details on ship refurbishments as the cruise line doesn’t always reveal everything until during or after the dry dock. Most of the upgrades will take place at the Grand Bahama Shipyard in Freeport, Bahamas. 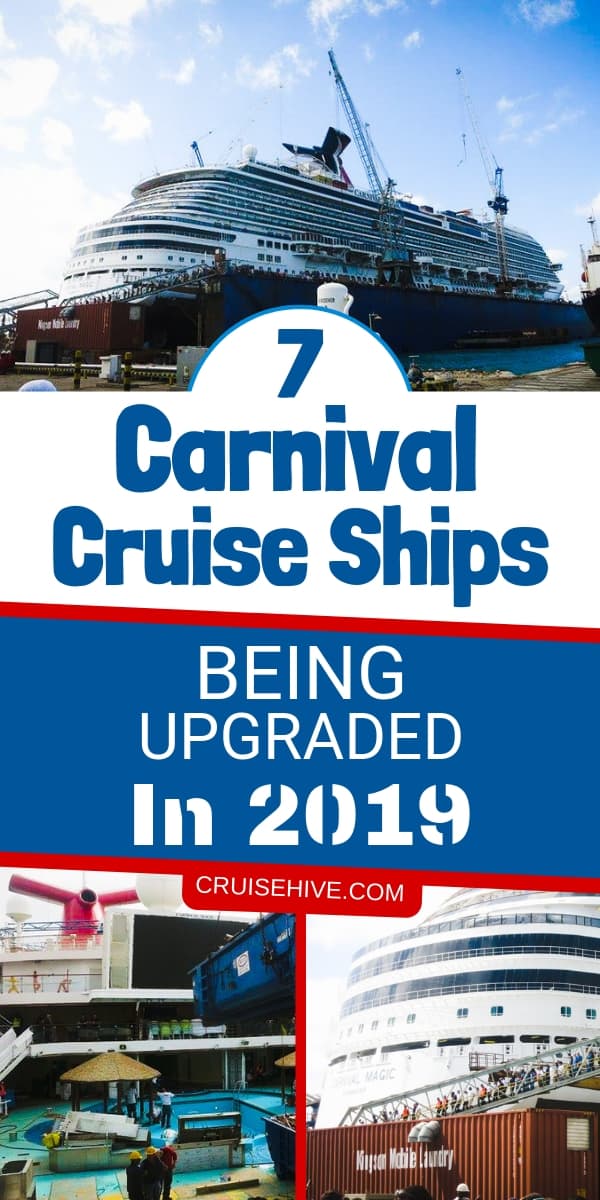