4 Things You Should Never Do Near A Cruise Ship

We often hear about things which have occurred onboard cruise ships but many things can also happen near them. Cruise ships might be big but can be extremely fragile and there are some things which can be very dangerous which you might not realize.

Let’s take a looks at four things which you shouldn’t do near a ship:

Jet Skiers recently had a very close encounter with the Carnival Magic cruise ship. On the afternoon of March 11, 2017, two jet skiers were having a thrill near the mouth of Port Canaveral, Florida. One of the women fell off the jet ski and when she tried to get back on it flipped over. As a result, both women were now in the water as the large Carnival ship was departing the port.

Carnival Magic got within feet of the jet skiers and if it wasn’t for a local sheriff who pulled them out from the water they would have been sucked underwater by the ships large propellers. There is no way the ship’s captain would be able to stop in time. It is best not to go looking for a thrill near where cruise ships come and go from a busy port each day.

Smoking onboard cruise ships have been a hot topic for years but what many people don’t realize smoking near a ship can be just as dangerous. One of the main reasons guests are not allowed to smoke on their balconies is the risk of a cigarette bud blowing back onto the ship which could cause a fire.

Smoking on the ship pier can do the same thing. It’s best to light up a cigarette when further away from the vessel and out of the security controlled port area.

This Royal Caribbean ship was arriving into Nassau, Bahamas a while ago. As it was approaching the port and just minutes away from docking, a small boat came within feet of being hit. We just don’t know how the small vessel got away with it. The cruise ship does seem to slow down but it is impossible to come to a halt so fast. You never know what can happen and best to keep a large distance between your small boat and the cruise ship.

Taking a swim near a cruise ship can be very stupid and dangerous. We’ve all had that urge when we see that stunning ship in port and we think we can swim over to it for a closer look. Stay near the beach and don’t swim up to the large vessel.

There has been video footage in the past of silly cruise ship passengers jumping from the ship when it is docked in port and then they swim over to the beach.

What if the ship decides to depart or the captain wants to test one of the thrusters, anything could happen and it really isn’t worth the risk. Someone swimming near a cruise ship could be sucked under by the propulsion power.

The power can also cause large sudden swells of water which is very strong. Not long ago the Carnival Vista destroyed a small marina in Italy as it got too close.

We know cruise ships are amazing things but try to keep a distance and don’t get too close. It only takes the smallest of mistakes for a life to be a risk. They look nice but cruise ships are fragile things which need to be respected and given room.

These are just a few things which we think everyone needs to know, feel free to add your own experiences or suggestions in the comments further down below. 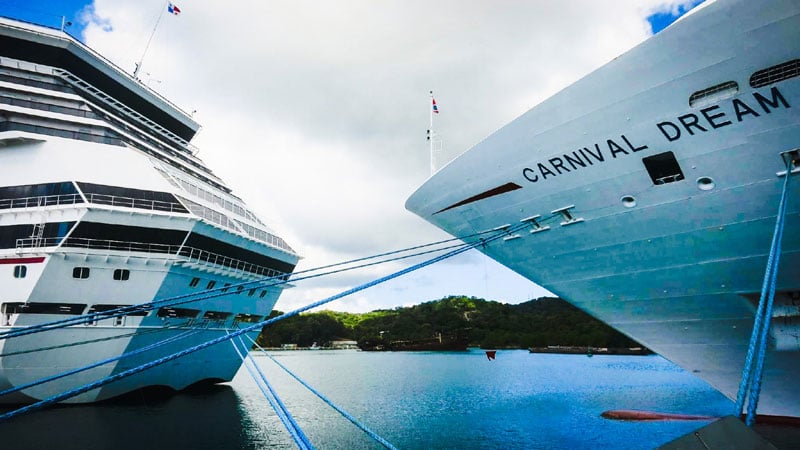