What Working on a Cruise Ship is Really Like

Ever wanted to really know what it's like working on a cruise ship? Want to know what goes on behind-the-scenes? Here is your inside scoop. 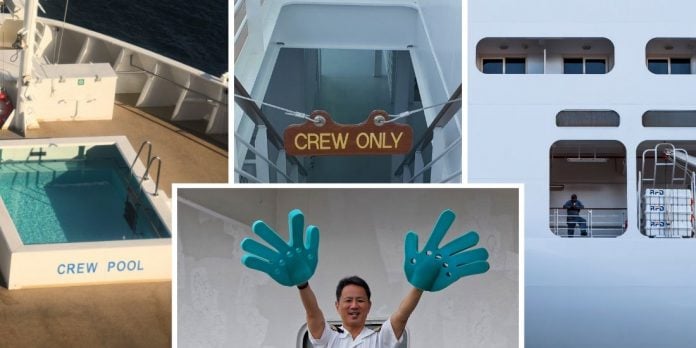 Let’s get this straight: cruises ships are a $21 billion industry in the U.S. That explains why almost 14.13 million Americans took a cruise in 2019 alone.

But what goes on behind-the-scenes on a cruise, anyway? Read on to see what working on a cruise ship is really like.

Do You Get Days Off Working on a Cruise Ship?

According to Brian David Bruns, who wrote the explosive tell-all Cruise Confidential, there are literally no days off when you are working on a cruise ship.

Although Bruns had never boarded a boat before he applied to become a waiter on a Carnival cruise ship, he never thought that life on a cruise ship would be so demanding.

What happens next is crazy: Bruns would be the first American waiter ever to finish his cruise ship contract with Carnival without throwing in the towel.

Bruns reveals that pay is minimal and he was constantly working at least 80 hours a week, which he places closer to 100 hours a week.

How do you adjust to such a long work week? Brun shares that it’s super hard to get used to working such long hours. At the same time, he also says that you barely have the time to think about your hectic schedule.

That’s why it’s so important for new cruise ship staff to take training classes to set sail for their future careers. But here’s the kicker: the training period is over three months long depending on the cruise line.

During that time, they’ll learn about how to do their specific job on the ship through group activities.

Once they’re done training, cruise ship employees have to sign a lengthy contract, which can last for up to nine months. Of course, no days off includes holidays too!

However, if an employee is given a long contract, then they can usually take a two-month break or more to live their life on land. But it’s rare that any staff members even take this vacation!

Is Working on a Cruise Ship Hard?

In a nutshell: cruise ship work is actually really difficult. To be honest, it’s already hard enough to work at a restaurant on land. But at sea, it’s a whole other story.

In fact, most cruise ship servers have to take care of up to 30 diners at the exact same time. Plus, the kitchen is more than 100 yards away from the floor.

How do you get through a shift? Bruns dishes that you basically have to sprint to get through your shift. By the time that you clock out of work, it feels like you just left the battlefield.

No wonder why so many employees quit before they finish their contracts! Despite this fact, there have been cruise ship employees who lasted 10 years or more aboard the boat.

Plus, there’s room to get promoted too. Even though most staff members start out at the bottom of the ranks, they can move up as time goes on. Pro tip: employees that stick it out are guaranteed flexible contract and job security.

That’s why a lot of family members choose to work together on the same cruise ships too. Want to know the best part?

As a cruise ship employee, you’re pretty much guaranteed to see the world as part of your job. In spite of this, staff members are only given a couple of hours per day to explore their new surroundings!

How do cruise ship employees deal with such a hectic job? Bruns says that a lot of cruise staff member use alcohol to keep their spirits up. Sometimes, employees would even party until the morning.

Get this: most cruise ships will actually give their employees free drinks after work too! Nevertheless, this sort of behavior starts to add up. The result? A much higher alcohol tolerance!

Do Cruise Ship Staff Date Each Other?

Here’s the deal: it’s highly likely for a cruise ship employee to date another staff member.

Surprisingly, there’s no risk of getting canned for dating a coworker when you work on a cruise ship. The only rule? A cruise ship employee is never allowed to date a cruise ship guest!

As long as you stick to the rules, many cruise ship workers have brief relationships with their fellow employees. Sometimes, these relationships last for months at a time.

But wait – there’s more. With so many cruise ship employees dating each other, some of them even end up getting married!

This is no secret to cruise ship companies, who actually allow married employees to work together on the exact same ship. Not to mention sharing a cruise ship cabin together too.

That being said, it’s very common for cruise ship employees to have two different relationships: one on sea and one on land.

Nonetheless, most cruise ship relationships can begin and end very quickly. Why? Since staff members don’t have any time away from their partner, it’s easy to get over the honeymoon phase!

Do Cruise Ship Employees Live on the Ship?

Since cruise ship employees work around the clock, they’ve got to live on the ship and adjust to cruise ship life. But that doesn’t mean that it’s the typical “room and board” experience.

Incredibly, many cruise ship employees share tiny cabins on the boat. Bruns claims that his room aboard the ship was so small, that he couldn’t even do a push up in it.

Imagine trying to get ready for the day at the same time as your bunkmate! That’s not all. When you work on a cruise ship, your roommates come from all around the world. Nonetheless, they usually don’t stay onboard the same ship for too long.

Amazingly, Bruns divulges that you could have a different bunkmate by the time that you finished one shift at work.

He continues that you can’t even tell who your roommate is anymore when the curtain is closed in your bunk! Although cruise ship employees live together, that doesn’t exactly mean that they’re all on the same level.

Incredibly, there’s a hierarchy of staff members at sea, with officers at the top of the list. That’s because they often receive the best meals, drinks, rooms, and outfits. They get more time off than regular staff members as well.

Yes, you read that right. As if that’s not enough, most officers don’t even talk to lower-ranking cruise ship workers. The proof?

Higher ranking cruise ship employees live on the higher floors of the boat, while employees with less clout have to live on the bottom levels of the ship. We’re not through yet.

Cruise ship employees even have to dine according to their ship ranking. That means that there are three different dining halls:

You might be wondering: do cruise ship employees get free food? Luckily, those that work aboard a cruise ship are guaranteed an endless supply of free food. As a matter of fact, there’s even a special kitchen that prepares the crew members’ meals.

What do cruise ship staff members eat while they work? Crew meals range from burger and fries to regional dishes from around the world.

What if a crew member is too busy to take a meal break? Fortunately, there are laws in place to make sure that every cruise ship employees get to take breaks for meals and snacks.

However, this doesn’t necessarily mean that the food is tasty! Shockingly, lower-ranking cruise ship employees like waiter and bartenders are given the worst grub on the boat.

Some former cruise ship employees even disclose that they were given strange things to eat like rubbery chicken and stewed fish heads.

The bottom line is mess halls for cruise ship employees are not for the faint of heart!

How Much Do Cruise Ship Employees Make?

This truth is most cruise ship employees are getting paid a lot of cash to put up with life at sea.

Astonishingly, Darling discloses that many cruise ship staff members get paid about $4,000 per month but that’s depending on the cruise line. To top it off, the standard paycheck comes in cold, hard cash. Not bad for not having any expenses to pay for!

The best part? Depending on where you come from, many cruise ship employees don’t even have to pay taxes on their income.

How is this possible? Because cruise ship workers make their money on international waters, which makes the laws a little blurry.

Naturally, a cruise ship employee’s cash starts to add up over time. Amazingly, some crew members are eventually able to save up enough money to buy their own homes!

What’s it Like to Work on a Cruise Ship?

In reality, it’s very lonely to be an employee on a cruise ship. Even though you’re surrounded by thousands of guest and coworkers, Bruns shares that it can still be an isolating experience.

It gets worse as Bruns calls his time working aboard the Carnival cruise ship as the loneliest he’s ever felt in his entire life.

Why does this matter? Because dozens of other cruise ship members are coming and going every couple of days. As a result, staff employees hardly know one another by the time that they finish out their contracts.

How do you get used to such a high employee turnover? Bruns’ advice: you either work through it until the end of your contract or quit before your contract is up.

But there’s still hope. Bruns shares that it’s easier than ever to make friends with other cruise ship employees from all over the globe.

Although the ship travels all over the world, most cruise ship employees get to experience different cultures through the friendships they make with international workers.

Even though talking about religion and politics is normally frowned upon, that’s usually what most cruise ship workers spend their time talking about.

Incredibly, there can be up to 60 unique nationalities of cruise ship employees working on the same vessel!

Working on a Cruise Ship Is a Crazy Experience

Still curious about working on a cruise ship? Let us explain: most cruise ship members work every single day of the week. That includes holidays.

So, when they do have time off, they often make the most of it partying at the various crew bars aboard the ship.

To cope with all of the hard work, cruise ship employees usually form tightknit relationship and friendships with one another.

But with such a high turnover, it’s very hard to keep in touch with all your newfound friends. That doesn’t stop some cruise ship workers from getting married to each other though!

It’s also common for entire families to work aboard the same cruise ship. However, most people quit before their contract is up. If you can stick it out, it’s worth it for the crazy experience! 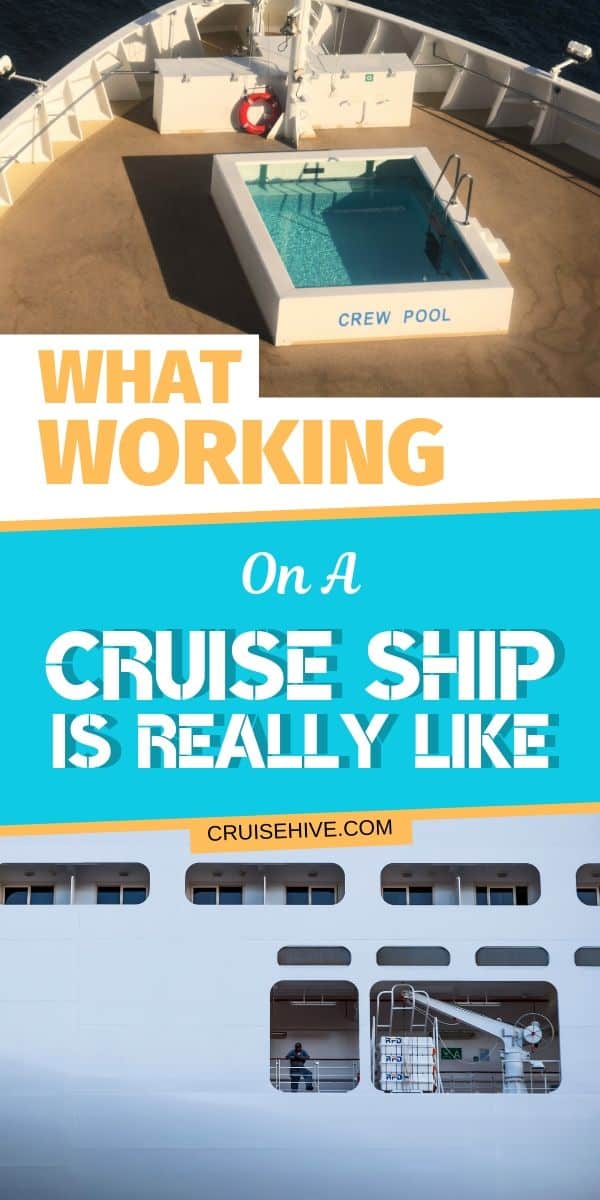