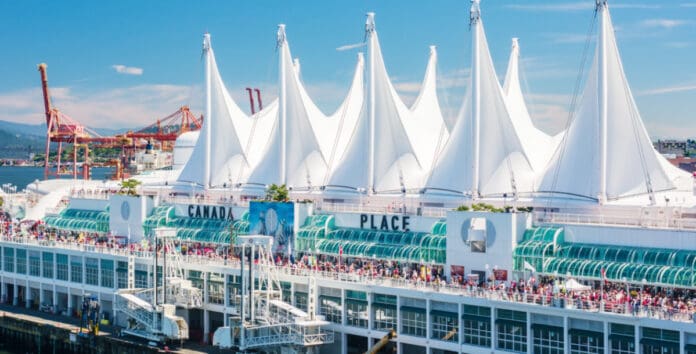 Vancouver cruise terminal is conveniently located for cruises to Alaska. It serves around 900,000 cruise passengers every year from late April through September. This top-rated port destination is the home base for many cruise ships during the summer season and has around 290 ship calls every year.

Its northern location, excellent amenities, and natural beauty make it a popular base for cruise lines offering one-way and round-trip Alaska cruises. They traverse the stunning Inside Passage along British Columbia’s west coast.

We cover everything you need to know about Vancouver Cruise Terminal, from how to get there to what amenities are available. Check out the facts below before you sail!

1. Where is Vancouver Cruise Terminal?

The Port of Vancouver Cruise Terminal is conveniently located in downtown Vancouver. The official address is Canada Place Pier, 999 Canada Place, Vancouver, BC, V6C 3E1. The Port is situated in Vancouver Harbour, which then empties into the Burrard Inlet, a coastal fjord.

Vancouver Port is the largest in Canada and the fourth largest in North America (2014 figures) in terms of tonnes of cargo. Managed by the Vancouver Fraser Port Authority, it handles 147 million tonnes of cargo and 3.4 million TEU containers each year from 160 countries.

Vancouver Harbour covers 16,000 hectares of water, 1000 hectares of land and 350km of shoreline. The port has 27 marine cargo terminals. The three-berth cruise terminal can actually handle up to four cruise ships simultaneously.

The largest cruise ship ever to dock in Vancouver Port was the Norwegian Bliss. The arrival required carefully planning due to the low clearance of the Lions Gate Bridge. Ships of this height can only access the port at low tide when a First Narrows Traffic Control Zone operates. This means that no other ship can be in the narrows during the ship’s transit.

3. Which Cruise Lines Operate From Vancouver?

There is a surprising number of cruise lines that sail out of the Vancouver Cruise Terminal. Of the 28 cruise companies currently using Vancouver cruise port, many are small luxury ships or expedition vessels offering exclusive Alaska cruise experiences for small groups. Some cruise ships only call in occasionally as part of their global cruise itinerary, such as The World Residences at Sea private cruise ship.

Vancouver is considered one of the top cities in the world. The natural harbor sits in Vancouver Harbour and opens into the Burrard Inlet. These coastal waters are home to many marine species, including killer whales, porpoises, dolphins, humpback, fin, blue and sei whales.

In order to maintain the pristine waters of this beautiful harbor, Vancouver Port authorities run Shore Power which reduces emissions by allowing cruise ships to shut down their engines while berthed in the port. This is part of Vancouver’s EcoAction Program, which reduces pollution, underwater noise, CO2/greenhouse gas emissions, and other environmental contaminants.

The port also offers lower harbor dues (up to 47%) for ships using clean fuels and eco-friendly technology and awards suitable participants with a Blue Circle Award for energy efficiency. Currently, only Disney Cruise Line, MSC, and Princess Cruises have met these higher standards for eco-efficiency.

As the main hub for one-way and round-trip Alaska cruises, Vancouver is the point of departure for cruises to Hawaii, Asia, South America, Mexico, West Coast USA and the Panama Canal. It is a truly international meeting place for all nationalities.

This Canadian port city hosts many festivals and is known for its international cuisine, vibrant nightlife, high-quality lifestyle and clean air.

Must-see attractions for cruise visitors include the Capilano Suspension Bridge, Stanley Park (listen for the 9 pm Gun Salute every evening), Grouse Mountain, and the FlyOver Canada virtual flight. You will see most of these landmarks as you sail in and out of the Vancouver cruise terminal on your Alaska cruise.

Cruises have been sailing out of Vancouver for almost 40 years. Canada Place was built on land previously used by the Canadian Pacific Railway Pier B-C. Construction was marked by the arrival of Queen Elizabeth II aboard the Royal Yacht Britannia.

Along with the Prime Minister, Pierre Trudeau, and BC Premier, the Queen poured the first concrete. The Canadian Pavilion was opened on the site by Prince Charles during Expo 86 and it hosted 5 million visitors during that year.

Beneath the five 90-foot white sails of the roof you will find the Vancouver cruise terminal along with the Convention Centre, World Trade Centre, 5-star Pan Pacific Hotel Vancouver and the FlyOver virtual ride.

In 2001, the building was expanded to create an additional berth for the burgeoning Alaska cruise industry. It was used as the main Press Centre during the 2009/2010 Winter Olympics. More recently it was renovated in 2011 at a cost of CAN$21 million.

7. Tips for Cruise Embarkation and Disembarkation

Check you have all the necessary documents and travel permits before leaving home. You will need an eTA (electronic Travel Authorization) if you are flying to Canada for your cruise. You can apply online if you are a resident of an eTA eligible country; the electronic travel permit costs CAN$7. You do not need an eTA if you are a US citizen or are arriving by road or sea.

Non-US citizens from eligible countries will also need an ESTA if you want to disembark and enjoy shore excursions in Alaska. You can apply online. An ESTA costs US$14 and lasts for two years.

Your passport and documentation will be checked by US Customs and Border Patrol as part of the embarkation process. Once on-board you are considered to be in US jurisdiction.

On arrival at the terminal, porters will help you label and check-in your luggage. It will be delivered to your cabin. Keep any medications, passport, paperwork and necessities with you in your hand luggage.

Escalators transport you to the second floor check-in area in Convention Centre Hall C. You will need to complete a health questionnaire, hand over your ID/ticket information and have your photo taken. You will then get a boarding card that doubles as your room key and on-board charge card. You will then be screened before boarding your cruise ship.

On your return to Vancouver cruise terminal, your luggage will be waiting for you in the baggage area. You will be given a disembarkation time if you are part of a larger cruise ship. You will need to wait in your allocated lounge area on-board until your group is called.

You will need to complete a declaration for Canadian customs and have your passport checked by the Canadian Border Services Agency. Once ashore, you will be directed to your onward transportation, taxi or parking lot.

8. Facilities at the Cruise Terminal in Vancouver

Canada Place is the location of Vancouver’s award-winning cruise terminal. It has outstanding facilities and design which has netted it several awards including:

Short-term baggage services are provided at Vancouver cruise terminal by WestCoast sightseeing. It is ideal for those who plan to take a shore excursion or explore the city independently before heading to the airport for their flight home.

Vancouver cruise port offers free short-term parking at Canada Place for dropping off cruise passengers. It also has a long-term cruise parking facility on-site for 750 vehicles. It is operated by WestPark and pre-booking is recommended.

Those requiring wheelchairs or scooters for the duration of their cruise should hire them directly from Scootaround. They should be pre-booked and will be delivered to the cruise terminal for pick-up.

A limited number of wheelchairs are available for those who need assistance while in the cruise terminal.

There are several cafes and restaurants within walking distance of the Vancouver cruise terminal including a Food Court on the lower level of the Waterfront Centre adjoining Canada Place.

If you need to report lost luggage or have lost an item in the cruise terminal, contact the on-site Security Office or call (604) 684-8525. For items left behind on the cruise ship, contact your cruise line direct.

Just to summarize the amenities at the Vancouver cruise terminal:

9. Getting to the Cruise Terminal in Vancouver

If you need transport from Vancouver Airport (YVR) to the cruise ship, there are several options.

The easiest way to get you and your baggage from the airport to the cruise ship is by taxi. Fares are fixed by zone. The cost of the trip will be CAN$35 and the 9-mile journey will take about 30 minutes. If you have an Uber account, this may work out slightly cheaper. Taxi-sharing is also available.

If you need to drop off a car rental, Avis, Alamo and National have onsite offices at the cruise terminal.

If you have pre-booked a limousine for onward transport post-disembarkation, you need to contact the traffic attendant at Door D and have them allow your limousine access to the cruise terminal. There are also a number of limousine companies available on-site.

Shuttles run between the airport and cruise terminal by WestCoast Sightseeing in conjunction with Gray Line buses. They also offer transfers to hotels and provide sightseeing tours.

Most major cruise lines operate a transfer to and from the airport. Seats must be pre-booked. You may have to wait until all the booked cruise passengers are on-board. If you need help with baggage, this is a good option.

However, cruise transfers are not the cheapest way to get to and from the cruise ship. For example, Carnival charges US $27.99 per passenger each way and other cruise lines charge around $30.

A taxi will be cheaper and more convenient, especially if you are traveling as a couple or group.

From the USA, the I-5 becomes the BC-99 highway after crossing the US/Canada border. After crossing the Oak Street Bridge, turn left onto 49th Ave, right onto Granville St and then take the Seymour Street exit. Continue to West Cordova Street and right on Howe Street and you will arrive at Canada Place. Long-term cruise parking is available for those driving to Vancouver cruise terminal.

Where do cruise ships dock in Vancouver?

How much is a taxi from Vancouver airport to cruise terminal?

A taxi from Vancouver Airport (YVR) to the cruise terminal will cost $35 and the journey takes about 30 minutes. Prices are charged by zone and are fixed so you will not be overcharged. It may be slightly cheaper to book a ride-share with Uber. Prices are from $28 to $36.

How far is Vancouver airport from cruise terminal?

The journey north from the airport to Vancouver cruise terminal is 8.6 miles (13.8km) and takes about 25-31 minutes, depending on traffic.

How many cruise terminals are in Vancouver?

Vancouver has just one cruise terminal, at 999 Canada Place. It handles up to 4 cruise ships at one time.