Cruise Ship Passengers Injured After Vehicle Ends Up in Sea

Royal Caribbean cruise ship passengers have been injured during a vehicle accident in St. Maarten in the Eastern Caribbean.

Freedom of the Seas Passengers Injured

While the Royal Caribbean cruise ship was docked at Philipsburg, St. Maarten yesterday there was a vehicle accident which according to Cruceros Puerto Rico involved cruise visitors from Freedom of the Seas.

According to a video posted on social media by local authorities, a minivan can be seen half into the water in Marigot Bay which is located on the French side of the island known as St. Martin.

According to the local Police, the minivan ended up in the water while doing a maneuver at the seafront and several people were clearly injured. There were no reports of any deaths. You can view the footage below:

It’s not clear if the cruise passengers were on a shore excursion at the time or just using general transportation. There was a delayed departure from the Caribbean island due to the accident. The ship arrived in St. Maarten at 8:00 AM on Saturday and was originally scheduled to depart at 5:00 PM.

It is also known that three local youngsters were involved in rescuing those in the vehicle before emergency services arrived. They have been called heroes of the day by Police in Marigot.

Freedom of the Seas is arriving back at its homeport in San Juan, Puerto Rico today after completing a week-long southern Caribbean cruise. Port of calls included Aruba, Curacao, Bonaire and then finally Philipsburg, St. Maarten which is where the accident occurred.

Also Read: Things to Do in Philipsburg, St. Maarten During a Cruise

The large Royal Caribbean cruise ship is 154,000 gross tons and a guest capacity of over 3,700 at double occupancy. The vessel joined the fleet in 2006 as the first in its class.

We have reached out to the cruise line for further details and how the accident has impacted passengers. We’ll update the post shortly. 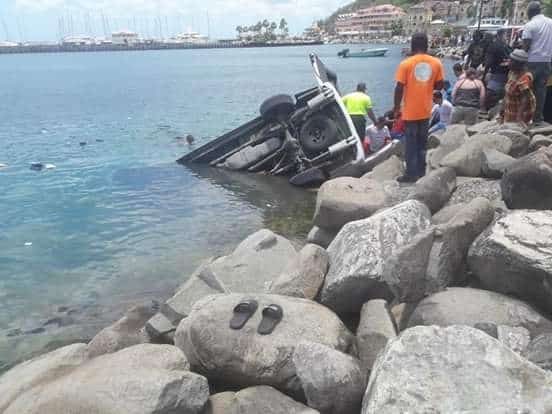