A cruise passenger has been caught standing on the very edge of the Allure of the Seas cruise ship on the other side of the balcony.

It’s now known that the passenger in question was kicked off Allure of the Seas during a call at Falmouth, Jamaica on October 16. The guest is now banned for life cruising with Royal Caribbean. Feel free to continue reading the original details below.

Reckless Behavior Caught on Allure of the Seas

A photo that has been originally posted on social media by Peter Blosic in the Royal Caribbean Crown & Anchor Society Group shows a woman on Royal Caribbean’s Allure of the Seas doing something extremely dangerous and reckless.

He captured the guest by taking a photo as she was standing on the opposite side of her balcony. In the photo, the woman can easily be seen standing right on the edge of the Oasis-class cruise ship.

It appears the guest is towards the forward part of the ship and just two decks above the end of the bridge can be seen on the starboard side. The photo was apparently taken yesterday while Allure of the Seas was at sea in the Caribbean.

According to his post online, he did alert guest services and the woman was eventually tracked down to the cabin she was staying in. Nothing more is known after that but it is likely she is being kicked off in the next port of call.

Cruise lines take this kind of reckless behavior extremely serious as it is life-threatening and would impact other cruisers too. The photo was apparently used as evidence. Just one gust of wind or a wrong step could have seen the woman end up in the water which would then become an overboard situation.

At the time, Allure of the Seas was sailing at sea towards the first should call at Labadee which is today. The ship had departed Fort Lauderdale, Florida on October 13 as part of a seven-day western Caribbean cruise. Other calls include Falmouth in Jamaica and Cozumel, Mexico before returning to her homeport on October 20.

This is not the first time a Royal Caribbean cruise ship has had to deal with something like this. In January 2019 a man jumped from his balcony on Symphony of the Seas, another Oasis-class vessel.

This occurred while the world’s largest cruise ship was docked in the Bahamas. He was later kicked off the ship along with his entire group and was banned for life cruising with Royal Caribbean.

Cruisers should NEVER do anything like what the passenger in the photo above is doing. It is very dangerous indeed and even if there is no injury or tragedy it is still likely to end badly by being removed from the ship, banned and even getting the authorities involved. 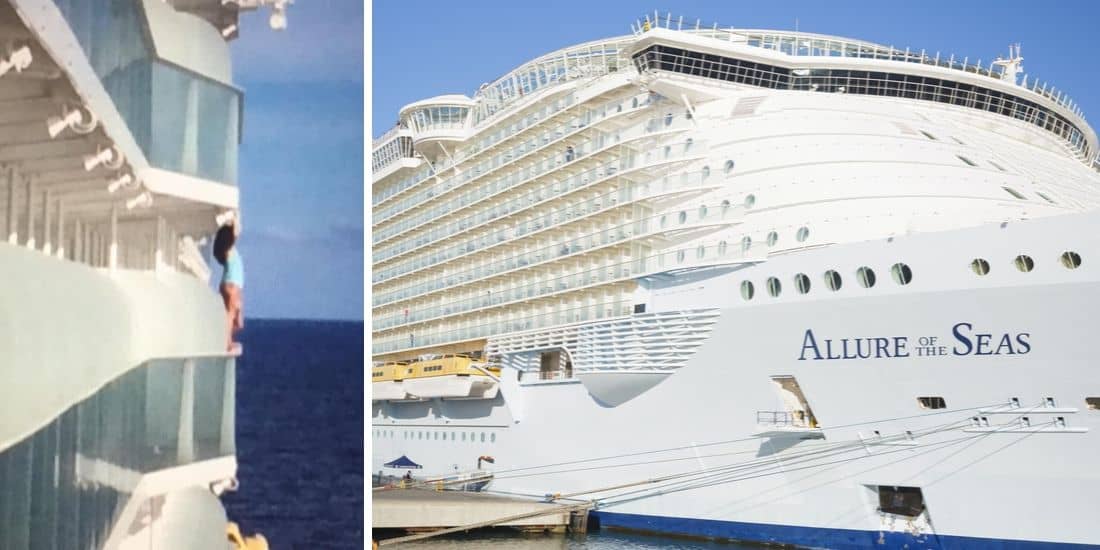