Harmony of the Seas which is the world’s largest cruise ship has finally been christened in a ceremony held on Thursday.

The Royal Caribbean ship has finally reached its last major milestone, the naming ceremony. 23-year-old Brittany Affolter from the Miami-Dade region was at the center of the celebrations as the traditional champagne bottle smashing against the hull took place. The ceremony was held at the aft of the ship located at the Aqua Theater and below the famous Ultimate Abyss 10-story slide.

Harmony of the Seas has only recently started its U.S. deployment for the very first time. The ship sailed a transatlantic crossing from the Mediterranean which is where it was based since first entering service in May 2016. The vessel is now sailing weekly Caribbean cruises from Port Everglades, Florida all year round.

Harmony of the Seas is a huge 227,000 gross tons and can carry over 5,400 passengers at double occupancy. It has been a busy time for the innovative ship as it also met up with sister ships Oasis of the Seas and Allure of the Seas for the very first time just before it arrived in the United States. 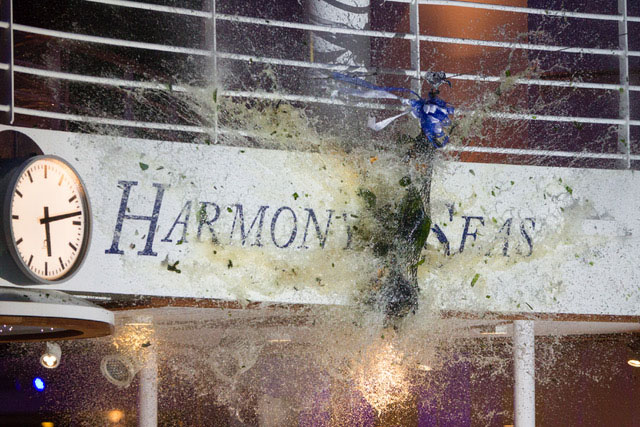