Woman Shouts For Cruise Ship To Come Back After Missing Departure

A woman from the Carnival Legend missed the ship in Ketchikan, Alaska last week. The unnamed woman was caught on video walking fast down the pier as the ship was just starting to move away from the dock.

The Spirit class ship which is operated by Carnival Cruise Line was calling at the port of Ketchikan on Saturday, August 13. At around 1:00 PM passengers on the ship were surprised to see a woman shouting “hey! hey! hey! hey!, come back! come back!” as she was walking fast along the pier to try to catch the ship. There were several passengers on board shouting out “hey” back to her who can be heard in the video.

The user named Tracy Gehrts who posted the video said on Cruise Critic “She was heckled by pretty bad by people both on and off the ship. I don’t think she expected to get left behind. Before I started rolling, she was pleading with people out on their balconies to call someone for her. Then as the ship started drifting away, she can be heard screaming “Pull it back!”

The Carnival Legend was scheduled to depart Ketchikan at 1:00 PM and the back onboard time was at 12:30 PM. The woman was around 38 minutes late for the ship. The ship was sailing a 7-night Alaskan cruise which arrived back at its home port in Seattle, Washington on August 16.

Carnival Legend is an 86,000 gross ton cruise ship which can carry over, 2,100 passengers at double occupancy. the vessel is currently based out of Seattle, Washington sailing 7-night cruises in Alaska.

Cruise Hive is posting about this so that people realise how important it is not to miss the ship. In most cases, the passenger would have to fly to the next port of call or home at their own expense. Always make sure you’re on ship time when in port and try to arrive back well before the scheduled back on board time. 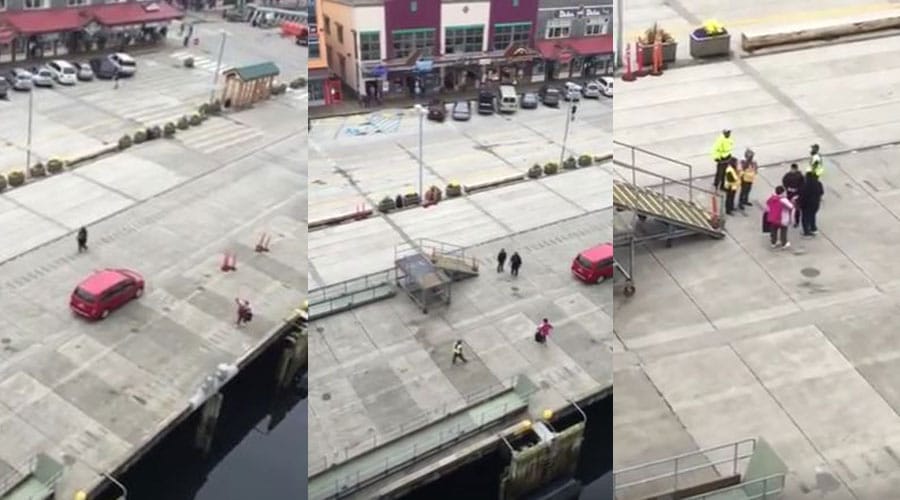