Woman Leaves Kids Onboard After Missing The Cruise Ship

This is what you should not do when cruising, a woman missed the cruise ship while her kids were still onboard. The female passenger looked distraught as the Norwegian Breakaway was pulling away from the dock at Nassau, Bahamas.

A fellow passenger caught it all on his phone as the large 144,000 gross ton vessel had just departed Nassau. The woman was on her knees just feet away from the ship and she couldn’t believe what was happening right in front of her. If this doesn’t warn you about being on ship time then we don’t know what will.

You can watch the footage below:

According to Scott Thomas who filmed the video, the woman was shouting that her kids were still onboard. No other details are known about the lady and if any other family members were cruising with her. From what we can tell the lady was with another guy who later joined her on the dock. They had just missed the vessel by a minute or so. The 4,090 passenger Norwegian Breakaway departed on time at 5:30pm. We just hope her kids are not young and can look after themselves.

It’s essential to keep on ship time no matter what port a guest is visiting and to always get back to the ship with plenty of time to spare. Norwegian Breakaway is sailing a 14-day Bahamas and Bermuda cruise which departed its home port in New York on April 17. The vessel called in Nassau on April 21. 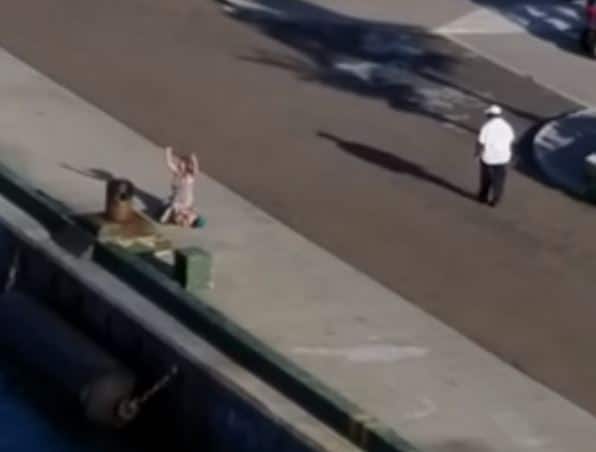