Will There Ever Be Another Cruise Ship Like the Titanic?

We previously talked about 5 famous cruise ships that had graced the silver screen in our “5 Movies That Feature Cruise Ships” post. And since the piece was about fictional cruise ships, we didn’t include the 1997 film Titanic, whose unforgettable Jack and Rose love story took place on the most famous of all cruise ships: the RMS Titanic. But we did mention that we could write an article on that movie alone.

Now, this post is not entirely about the James Cameron classic, though it will touch on it a bit. Instead, this write-up will attempt to answer this question: Will There Ever Be Another Cruise Ship Like the Titanic?

The answer, surprisingly, is both a yes and a no.

Yes, there will likely be another RMS Titanic, which was, in that period, not only the largest ship in the world but also the most luxurious. It was, quite simply, the star of stars of its time — bigger, better, and grander than its peers. It was only a matter of time before someone tried to recreate it. That cruise ship is actually now under construction per CNBC, and financing it is a multimillionaire.

In this case, the affluent benefactor of this massive undertaking is Clive Palmer, an Australian real estate/coal mining magnate. Palmer’s brainchild is reportedly a replica of the original RMS Titanic and will be named Titanic II.

Titanic II will practically be the same size as the RMS Titanic, which means that unlike the original, this replica will not be the biggest cruise liner of its time. The aim of the project is to replicate the luxury experience of traveling on an early 20th century cruise liner. The interiors will remain as faithful to the original as possible, and even have first, second, and third class accommodation.

The two ships, though, will have major differences. In order to keep up with modern safety standards, Titanic II will have a welded hull that will be approximately four yards wide, whereas RMS Titanic had a riveted hull that was not as wide.

Quartz reports that the updated ship will also have more lifeboat capacity than the original. Not enough lifeboats was one of the main reasons the death toll was so high on that ill-fated maiden voyage. One saving grace was that the tragedy led to much stricter maritime safety standards.

Take a look all these Titanic items to buy from Amazon right here.

Then again, there will never be another RMS Titanic in the sense that no cruise liner will hopefully ever equal its infamy. The story of the Titanic has been told many times, through literature, film, TV, and even video games.

While the ship was already famed before the Oscar-winning film, Titanic capitulated the ship into the public consciousness. Cameron’s classic went on to gross $1.84 billion worldwide and was the high-grossing movie of all-time for 13 years, ultimately becoming as popular as the ship that inspired it.

Perhaps fittingly, the film’s stars, Leonardo DiCaprio and Kate Winslet celebrated Titanic‘s 20th anniversary last year by taking part in a gala. The highlight of the event was an auction by the Leonardo DiCaprio Foundation, and the top prize was the chance to wine and dine with the real-life Jack and Rose. The enduring blockbuster also returned to the big screen in 2017, but for a limited time only.

Whether or not the Titanic II will ever be completed is still in doubt. What isn’t in doubt though is the global fascination with the original ship. And for one man, this fascination has driven him to try and create the ultimate tribute. 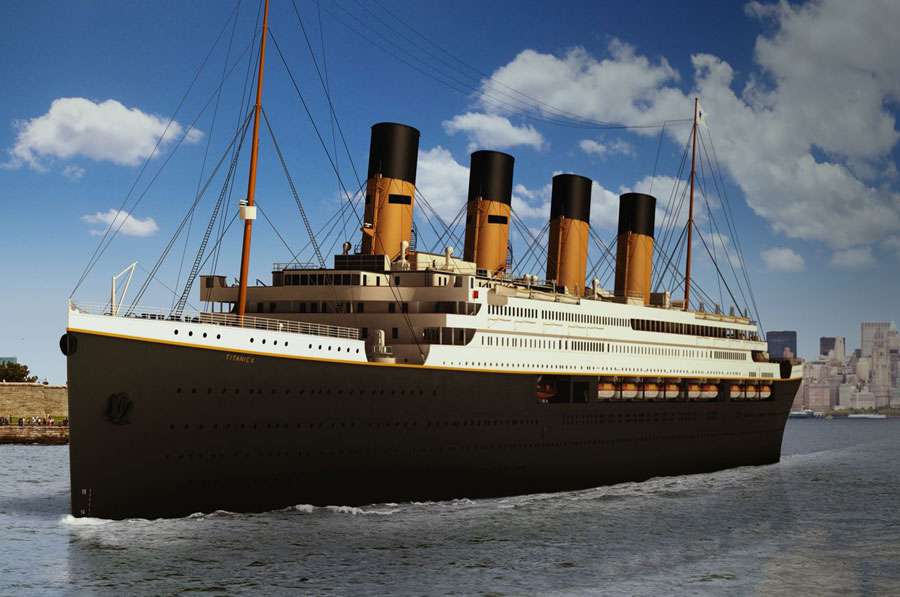