What Crew Members Do In Their Spare Time

Whenever you take a cruise I bet you’re always wondering what the crew members do in their spare time and if they have any time at all! Well, thankfully Cruise Hive knows what they get up to when they are not working long hours onboard the ship. Different types of crew members spend their time in different ways but also they all need the same thing, that’s freedom!

We’ll look at different things crew members do and why they do it. After reading this you won’t have to ask your favorite crew members what they do in their spare time as they usually get asked several times every single voyage.

FREE Wi-Fi In The Ports Of Call

One of the most important things to do when a crew member is not working is finding any amount of time to get off the ship and go to where the free Wi-Fi is. Usually, they will know exactly where to go and is most often a local bar or restaurant. The crew always seem to know where the free Wi-Fi is in every port of call and you’ll see them in groups at certain places. In fact, Wi-Fi in the destinations has become so popular for crew members that many ports have now built crew centers which offer most of the time free Wi-Fi for cruise ship crew only. A perfect example of this is in the popular cruise port of Cozumel, Mexico. So next time your walking around at your cruise destination keep an eye out for your dining room waiter or your cabin steward, you’re sure to see them with a laptop!

It’s a popular way for crew to keep in touch with their family and friends at home far away. The wi-fi on the ship can be slow so video calling isn’t good. Also, crew does have to pay to use the wi-fi which can be from around $20.00 depending on the cruise line. Another thing which doesn’t help is that the ships wi-fi won’t be in all areas so crew cabins under deck zero may not be able to use it unless they go to the crew internet cafe.

The crew is very often stuck on the ship for days and days without seeing sunlight. Also, the crew is on the ship for so long all they can eat is ship food from the crew mess. The food sometimes can be rotated but is well-known for not being the best and no, crew members do not eat the same food as the guests unless it’s the officers or captain. 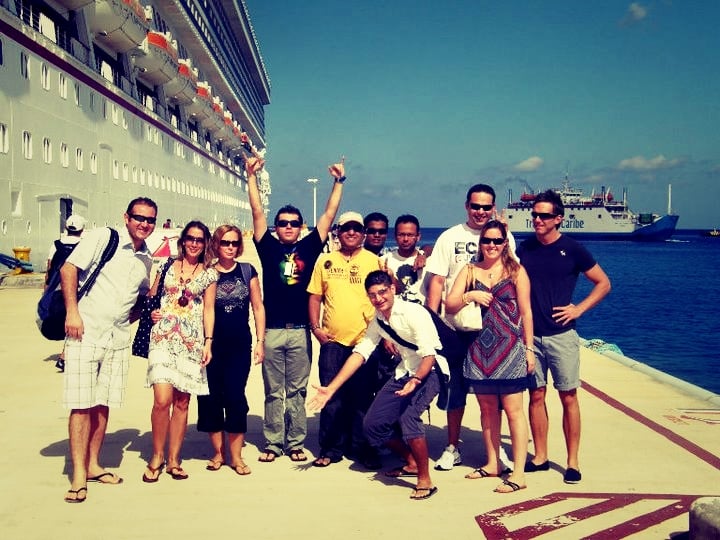 So when the crew does get a chance for some free time one of the first things they will do is get off the ship when it’s in port and go and eat some real life food in one of the local restaurants. Usually, the crew will go in groups if they have time. In almost ever destination there are a few dining places on land which the crew will always eat at and is well-known with most crew members on the ship. If you were to walk into one of these places you would see several groups of crew members drinking and eating together and of course with their laptops out!

Most crew on ships are international but a large percentage of them will be Filipino, Indonesian and Indian so expect to see those types of restaurants full with crew in the ports of call. They will know the best places to eat so you will know it’s a good place if you see any crew members there.

Crew members work hard and must always look their best when serving the ship’s guests so clean uniform is essential. In the crew areas, there will never be more that two laundry rooms. Usually, there’s a laundry room for regular crew and then another one for officers and staff (staff is people who work in the gift shops, casino, and spa). 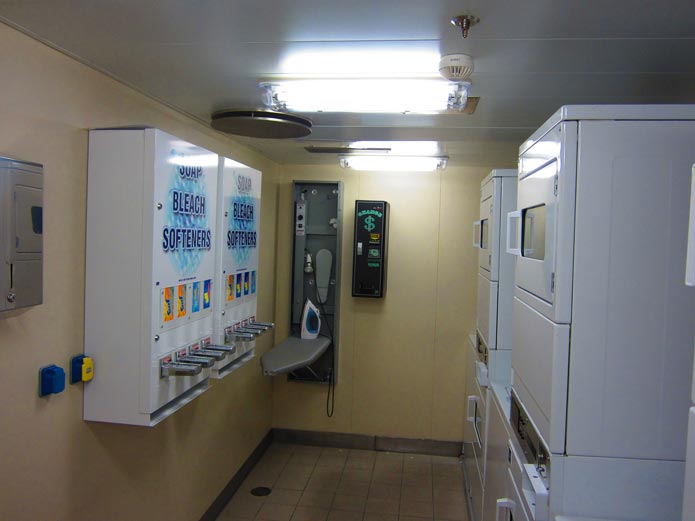 The laundry room can be a hive of activity as there’s never enough machines for the amount of crew who finally have free time and want to do their laundry. Machines often break and can always cause disruption and anger as everyone has limited time with the hours they work. For some reason, the laundry rooms are a famous place for clothes to go missing and crew members even steel each other’s machines as their time is just so precious. Also, you’ll see crew members doing their laundry at all sorts of strange times of the day and night.

The next time you see a crew member in their nice well-ironed uniform just think of how much effort they went through to get it looking that way!

Crew parties are probably the only time when crew members feel like their the passengers! Not all of them can attend the parties that the cruise line puts on for them as some have to work in the evening into the early hours of the morning. Security will block off one of the public lounges or sometimes a crew area so no passengers can party with the crew. Passengers do try to get in but often with no luck as they don’t have any name tags. 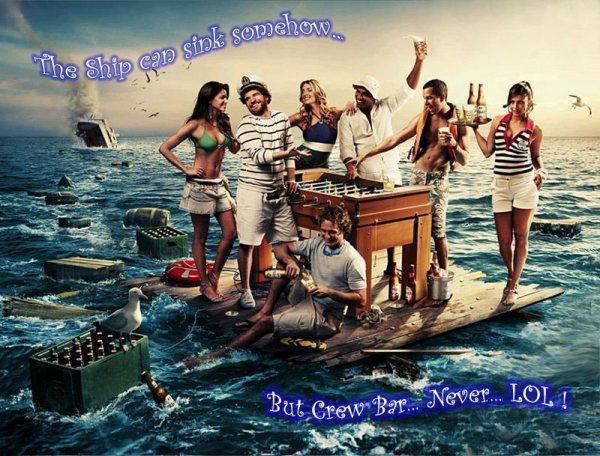 The parties are wild and it’s a chance for the crew, staff, and officers to let loose and have some fun. At the parties depending on which cruise line there is free beer and food for all crew members. They do have to purchase other alcoholic drinks but only at low crew prices. in fact, some of the cheapest alcohol you can buy anywhere is at the ship’s crew bar!

the crew parties will run to the early hours of the morning and the dance floor is always packed with drunk crew members enjoying themselves. The parties are held every month but if there’s a special festival then the ship will hold a party for them. When the crew gets together between working breaks or in their free time the parties are always a hot topic of discussion!

Going To The Beach

Another popular activity which is done in free time is going to the beach. The only thing is you won’t see many crew on the beach, only staff and officers as they have more port time. They will get off in groups and head off to a good beach which is well-known throughout the crew onboard the ship. 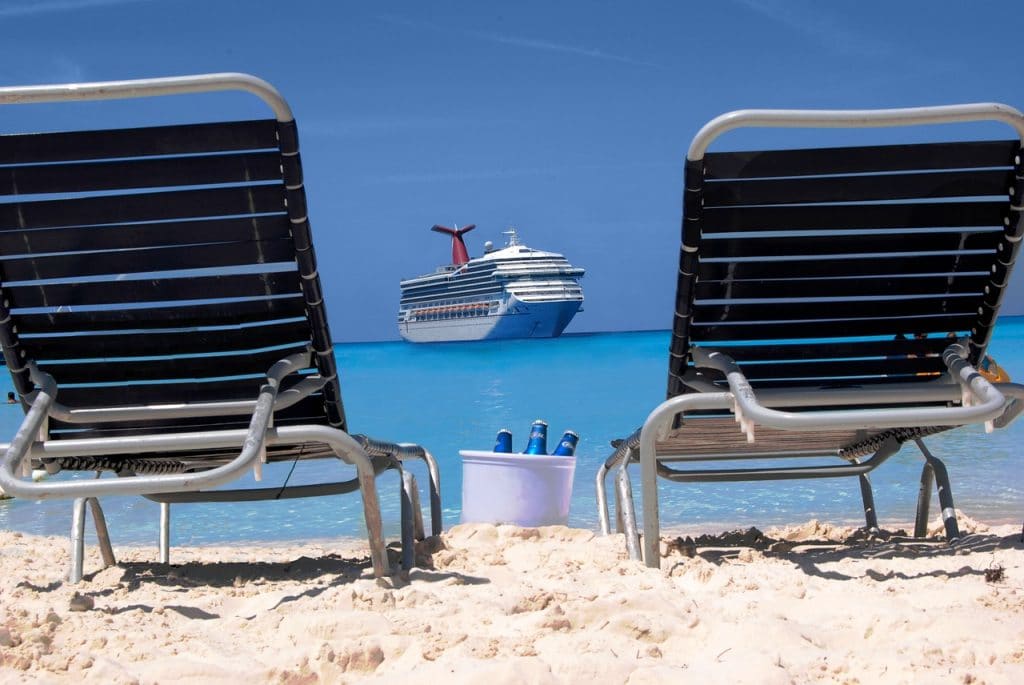 Many resorts in the ports of call actually offer crew rates which are good as they know they can spread the word about the resort. You’ll find them drinking, swimming and getting lots of sun until a few hours before the ship has to leave. If the ship doesn’t have a crew gangway then the crew will leave a little early to avoid the long passenger lines to get back onboard.

In “Crew Only” Areas!

So you’re on your cruise and I bet you’ve always wanted to know what goes on behind that “Crew Only” door right? well, your about to find out!

The crew areas stretch the entire ship and it’s where all the cabins, dining, and recreational areas are. there will be one long corridor which spans the entire length of the ship and is usually called the I-95 as it’s like the heart of the ship with a buzz of activity no matter what time it is. When the crew has free time they will often spend lots of time here in many of the spaces available for them. The crew bar is the main attraction as it offers crew cheap drinks. but it doesn’t just offer drinks, it can also sell snacks and supplies for crew members to take to their cabins. Some cruise lines will have small shops selling lots of different supplies and snacks at very low prices. The bar is open until the early morning and is a good way to spend time with friends or even partners which are common within the ship’s crew.

Also in crew areas are fitness rooms where they can work out and release all their work stress. You’ll usually see the same people there every single day! Even if the crew mess isn’t serving food there will always be crew members chatting to their friends at the tables in their free time. Often during breaks when getting tea or coffee crew will meet each other.

The crew can ever get their hair cut onboard at the crew barber. It’s usually a few Filipinos from the same ship department who have a barber schedule. The ship will have a cabin as a barber shop where anyone can go and get a haircut. the times are on the door and starts at around $15.00 for a cut. But the female workers get their hair done either at the ships spa if the cruise line allows it or at the port of call.

Another popular place for the crew to hang out in their free time is the open deck which is often at the very front of the ship. The crew can smoke and get some fresh air from their long shifts. Also, there is a small pool which they can use but it’s often out-of-order!

Hope you have enjoyed reading an insight into what crew members do in their free time. maybe this will help you understand more on your next cruise voyage. Each cruise line offers different things for the crew so this article isn’t for one particular cruise line. Post your thoughts in the comments section below and add your opinions.