Welcome To The Cruise Life Anthem of the Seas!

Royal Caribbeans second Quantum class cruise ship Anthem of the Seas has been named at a grand ceremony in Southampton, UK.

Anthem of the Seas along with sister ship Quantum of the Seas is the most technologically advanced cruise ship ever to enter the cruise industry and now it’s official. The naming ceremony in Southampton was lead by British travel agent Emma Wilby who is also the ships godmother. Wilby even put on the performance of her life as she sang on stage with Welsh choir Only Boys Aloud.

If you missed it you can watch some highlights of the ceremony from onboard Anthem of the Seas below:

The majority of the ceremony was done inside the vessels main theatre but the bottle of champagne was smashed against the vessels logo up on the open deck. Anthem of the Seas arrived in Southampton on April 18th and spent a couple of days hosting cruise professionals and travel agents before the big naming event on April 20th.

The ship will now begin sailing from Southampton for her Summer 2015 inaugural season. In November 2015 out of her new homeport of Cape Liberty Cruise Port in Bayonne, N.J. Anthem of the Seas was built by Meyer Werft in Papenburg, Germany and the shipyard is now constructing Royal Caribbeans third Quantum class cruise ship Ovation of the Seas which will arrive in 2016. 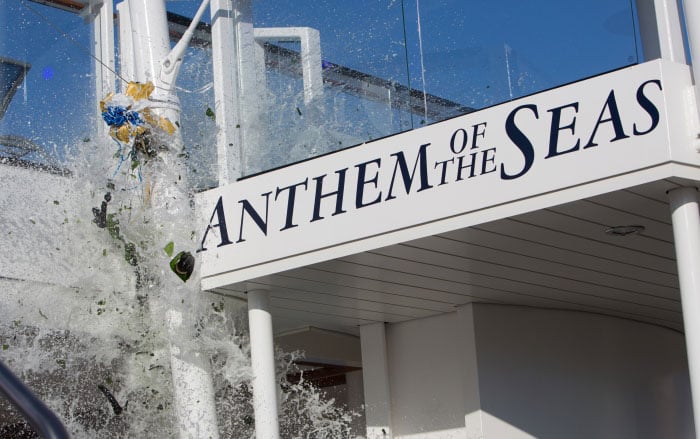