The latest cruise news update across the industry as cruise lines plan on resuming operations. 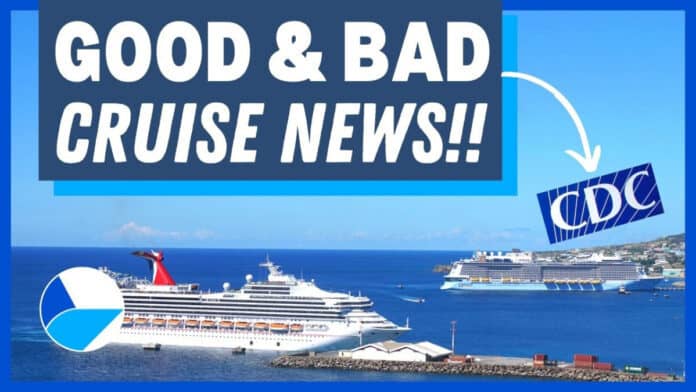 It’s time to find out what’s been going on in the cruise industry this week with the latest cruise news update, including the situation on resuming operations out of the U.S.

Here we go with another jam-packed week of cruise news, and yes, that includes the ongoing situation between the cruise industry and the CDC. New instructions have been released as part of the framework on the Conditional Sailing Order, and phases 2b and 3 have not gone down so well with the cruise lines.

So we’ve got all those CDC details along with two Carnival ships making a return to Galveston, crew vaccinations across multiple cruise lines, Texas joining the Florida lawsuit against the CDC, and Holland America announces its restarts.

The U.S. Centers for Disease Control and Prevention (CDC) released new technical instructions on May 5, 2021, as part of its framework on the Conditional Sailing Order. It does now open the door for two pathways to resume cruise operations out of the U.S.

Cruise ships that plan on taking the path of the simulated sailings will have much more strict requirements such as masks being adorned at all times including dining, open-deck space being limited, no more self-service food with the focus on takeaways, and much more. How the cruise industry has reacted to this, we’ll get into shortly.

It does seem the cruise experience for vaccinated cruises will be the better option but how that impacts departures out of Florida is the big question. Cruise lines have already started vaccinating crew members at Port of Galveston, PortMiami, and Port Canaveral as they plan on making a comeback this summer.

Two Pathways for Resuming Cruises: What You Need to Know

Along with the new instructions which you can read over on cruisehive.com the CDC said that it remains committed to get cruises restarted by mid-Summer and has actually been having twice-weekly meetings with cruise industry leaders since April 12.

While the CDC seems to be more positive and hopeful about the situation since releasing the new instructions, cruise lines have not. There have been ongoing frustrations across the industry due to the unrealistic requirements.

Various interpretations of the rules are possible, and rules seem unnecessarily restrictive. While other industries in the United States seem to go back to normal, in line with the goals of the Biden administration, the cruise industry is singled out and treated in a way no other industry is.

Norwegian Cruise Line CEO Frank Del Rio has been very vocal about the latest requirements in recent interviews. He’s said that the new instructions are “absurd” and comes as all NCL cruise brands are already planning a 100% vaccine operation for guests and crew. It’s just too much for cruise lines to work through, and Del Rio has said that resuming cruises in August is under threat.

The interpretation of the rules is certainly something that has been contested in the last 48 hours. While some believe the new rules only apply to cruises without the vaccination mandate and not to cruises with that mandate, others believe the rules apply to all ships and all cruises. The fact is that the masks rule is under the section for simulated and restricted voyages.

The messaging from the CDC is no doubt confusing, even the Cruise Lines International Association has stated that there is a lot for cruise lines to go through in order to achieve the goal of resuming cruises from the U.S. this summer.

There are now three major U.S. states against the CDC to allow cruise operations to resume. Texas has just joined the Florida lawsuit after the state filed a motion to intervene in a new filing on May 5, 2021, submitted by Attorney General Ken Paxton.

The Texas filing, which you can read fully over on cruisehive.com, comes on the same day when the CDC released new technical instructions as part of Phases 2B and 3 on the Conditional Sailing Order.

Even though the agency is starting to work with cruise lines and aims to allow cruising by mid-summer, there is still a push to get the industry moving as soon as possible from Florida, Alaska, and Texas, especially now with even more unrealistic requirements.

The filing mentions that nearly 1.1 million cruise passengers embarked in 2019 and that cruise ships accounted for 47% of the Port of Galveston’s revenue in that year. The knock-on effect from the cruise industry impacts hotels, dining venues, tours, and more but now all that has come to a stop.

The Port of Galveston losses are estimated at $1.2 billion in direct spending, 23,000 jobs, and $1.6 billion in wages statewide. Whether the lawsuit is a success or not, we’ll just have to wait and see.

Hundreds of people lined the pier at the Port of Galveston last weekend to welcome back home two carnival cruise ships that were based from the port before cruises were suspended back in March 2020.

There has been huge anticipation for the Carnival Breeze, a Dream-class vessel, and the slightly larger Carnival Vista, which is the first in her class. The day finally arrived when both ships entered the port at approximately 1:00 PM local time.

Many people posted the ship arrivals on social media, and hundreds lined the pier. There was also an escort by the Bay Houston Towing Company Tugboat Wesley A and the Texas City Pilot boat.

The two Carnival cruise line ships arrived a day before a Cruise Rally was held to discuss the economic impact on the state of Texas including Galveston.

On May 1, the crew of Royal Caribbean’s Explorer of the Seas started getting vaccinated at PortMiami and ever since, the crew on more ships have received their shots with Liberty of the Seas and Celebrity Equinox on May 2, Freedom of the Seas, and Navigator of the Seas on May 5 and even more ships as they dock at the port.

Carnival Cruise line started vaccinated crew members on Carnival Breeze and Carnival Vista after they arrived in Galveston as it’s likely they will become among the early ships in the fleet to resume operations this summer.

And also MSC Cruises has gone a step further than all other cruise lines with a fleetwide vaccination program. Crew members have already received a vaccination onboard MSC Bellissima and those crew members on MSC Virtuosa will be fully vaccinated before the new flagship debut out of the UK on May 20. Even more ships will have vaccinations including the 10 that will restart operations across Europe this summer.

Holland America to Restart From Greece

Holland America Line is finally going to make a comeback this summer after being hit heavily by the suspension of operations that first started over a year ago. The year-long ban of cruising by Canada has also impacted Holland America’s future cruise operations.

The cruise line will begin sailings out of Athens, Greece in August with departures on the Eurodam. The ship will depart on August 15 and 29 on an itinerary with calls in Montenegro, plus the Greek isles of Corfu, Santorini, and Mykonos.

On August 22 the vessel will depart on an “Ancient Wonders” voyage calling at Haifa, Israel, as well as Mykonos and Rhodes in Greece. The two different itineraries can also be combined into a longer 14-day cruise.

Guests can even book a seven-day itinerary departing on September 5, which will sail from Piraeus to Italy. The new cruises out of Greece opened for bookings on May 6, 2021.

Eurodam will be offering Mediterranean cruises to Italy and Greece through the fall, which the cruise line will detail in the coming weeks. The ship will then eventually redeploy back to the U.S. to offer Caribbean itineraries from mid-November 2021.

Those were just some of the biggest news stories from the week. There has been even more coverage including Holland America’s new ship completing sea trials, Star Trek and 80’s charters selling out, new contactless dining introduced by Princess Cruises, AIDA Cruises to restart operations in Germany, Carnival Cruise Line to rollout new livery across the fleet and much more cruise news.

You can read through and watch last week’s news update here.