The latest cruise news updates from the major cruise lines including US restart on Carnival advisory. 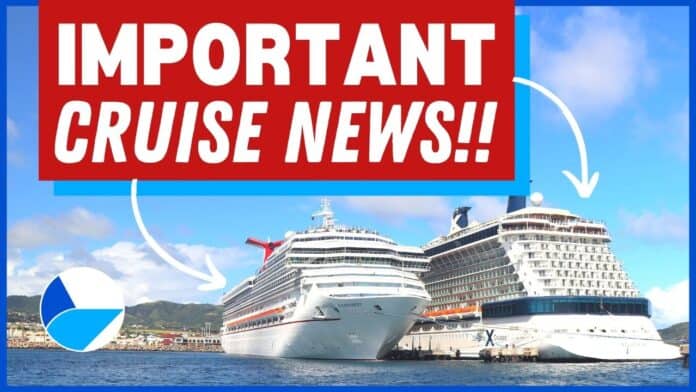 The good cruise news keeps on coming as cruise ships are restarting operations. In fact, the first official cruise is departing today! So let’s find out more about that along with the latest cruise industry updates and some important news from Carnival.

Celebrity Edge is departing out of Floriday today and if you’re watching this another day then it’s June 26, 2021. So we’ll update you all on that along with even more cruise news on MSC Cruises, Carnival Cruise Line, Holland America Line, Norwegian Cruise Line, and Royal Caribbean.

We will start with some breaking cruise news from Carnival Cruise Line as the cruise line sent out an urgent advisory yesterday for guests booked on Carnival Vista sailings departing on July 3 or 10 and Carnival Horizon departing on July 4 or 10. So guests must complete a health questionnaire in their Cruise Manager account.

The questionnaire needs to be completed for each guest, and it must be submitted by 11:59 PM EDT on June 28, 2021. That does not leave much time to complete, hence the urgency in the advisory.

Celebrity Edge Restarting from the U.S.

As you probably already know, Celebrity Edge is departing today from the U.S. This is the first actual cruise with paying passengers. After more than a year on hold and a long, difficult time to get to this point, it’s finally happening, and the vessel will kick start cruises from the U.S.

This ship will be departing today out of Fort Lauderdale, Florida, with strict protocols in place to make sure everyone onboard remains safe. The Celebrity Edge will sail a seven-day Western Caribbean cruise, including calls at Costa Maya and Cozumel in Mexico and Nassau in the Bahamas.

The cruises out of Fort Lauderdale will be for 95% fully vaccinated passengers. It’s a huge step forward and from this moment more and more cruise ships will begin restarting operations.

MSC Cruises celebrated a major construction milestone this week and revealed the name of its second Seaside EVO class cruise ship as MSC Seascape. The coin ceremony marked the keel laying of the future vessel at the Fincantieri shipyard on Monfalcone, Italy.

The ship is an evolution to the current Seaside class ships of MSC Seaside and MSC Seaview. The MSC Seascape will take the design and spaces even further with new features. The ship will be 169,400 gross tons with a guest capacity of 5,877. The ship will enter service in November 2022.

MSC Seascape will offer a RoboCoaster experience for guests. This new feature has not yet been revealed or detailed but hints towards an onboard Roller coaster. Do keep checking for all the latest developments as new details on the vessel are released.

Norwegian Cruise Line already froze the cruises in the days before the announcement, but now a final decision has been made. The further cancellations are due to the continued limitations on travel and the pandemic impact on local communities.

Guests who had an active booking on the impacted cruises will automatically receive a refund of their cruise fare by August 18, 2021. There will also be an additional 10% off coupon added to the account for those who have not already received one for a previous cancellation.

Carnival Cruise Line will grow with an additional two cruise ships. One of the additional ships will be new and the sister to Mardi Gras and Carnival Celebration, part of the excel-class. Parent company Carnival Corporation originally ordered this ship for sister line AIDA Cruises, but now the new-build will be reassigned to Carnival Cruise Line.

The third Excel-class cruise ship will arrive in late 2023 and be fully powered by Liquefied Natural Gas (LNG). The ship was ordered by Carnival Corp in 2018 for German-based AIDA Cruises and was set to join that fleet in October 2023.

The other ship that will join Carnival Cruise Line is the Costa Magica from Costa Cruises. She will undergo a dry dock to receive the Carnival look, including the new livery rolling out across the fleet. Once completed, the vessel will be renamed and will join the fleet by mid-2022.

With the two additional ships, the Carnival fleet will be at 27 by the end of 2023 and will undoubtedly make up for the huge loss of four Fantasy-class vessels in 2020.

Holland America Line is gearing up for a big return to service this fall with six cruise ships. Koningsdam and Zuiderdam will be based out of the Port of San Diego in California from September 2021.

Nieuw Amsterdam, Eurodam, Nieuw Statendam, and the all-new Rotterdam will be based out of Fort Lauderdale, Florida with a range of Caribbean cruises along with calls to the cruise line’s private island of Half Moon Cay in the Bahamas.

The cruise offerings from Holland America Line will be for guests who are fully vaccinated at least 14 days before departure.

Even though Holland America is returning to service in the U.S., the situation in other parts of the world is not as good. there are further cancellations for cruises in Asia, Australia, New Zealand, and South America for the remainder of 2021.

The further cancellations impacts cruises for Noordam based in Asia, Oosterdam down under in Australia, and Westerdam in South America. There are also fall cancellations for Volendam and Zaandam.

Two guests under the age of 16 have tested positive for COVID onboard the Adventure of the Seas cruise ship. The cases were found during routine testing before the voyage comes to an end.

One of the guests is asymptomatic, and the other is showing mild symptoms. They were swiftly put under quarantine by Royal Caribbean. As they are younger passengers, they were traveling with other guests who have tested negative.

It’s also good to know that the other members of the party are vaccinated. As per protocols, all those that came into contact have been tested, and the results are negative. They are also vaccinated.

Adventure of the Seas arrived in Freeport on Grand Bahama Island on Thursday morning, and the two guests, along with their traveling party, disembarked. The guests are heading back home to Florida. The ship continued with its arrival at Royal Caribbean’s private island of Perfect Day at CocoCay on Friday morning.

During these times, we will get more situations like this as more cruise ships start to resume operations. It shows that cruises can operate safely, and the industry is now in a position to handle COVID. Gone are the days of the Diamond Princess as cruise lines now know how to deal with it.

So those are some of the major news stories from the week, we’ve got even more including Carnival Cruise Line detailing its new e-muster drill, Carnival Corp reporting significantly higher bookings, P&O Cruises launches a new onboard app ready for when cruises restart, Freedom of the Seas completes first test cruise from the U.S., Royal Caribbean in discussions to begin cruises to Grand Turk, Celebrity Apex resumes cruises out of Athens, MSC Cruises releases health protocols for U.S. departures and so much more. It’s just been another busy week full of cruise news.

You can also catch up on last weeks cruise update here.