The latest cruise news from the week including Carnival Cruise Line restarting operations. 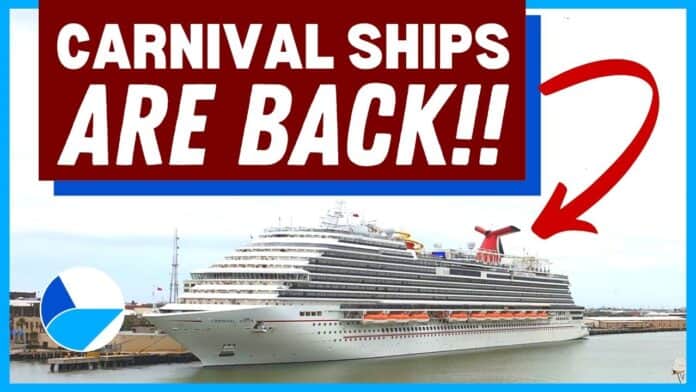 We’ve got plenty of cruise news updates for you as cruise ships are returning all over the place, including from the U.S. And the first Carnival cruise ship has finally restarted operations.

It’s a busy 4th of July weekend with cruise ships resuming operations for the first time, including Royal Caribbean, Carnival Cruise Line, and Crystal Cruises. The industry is not on hold anymore, and finally, after 15 months, people can go on a cruise vacation. There is plenty of news to update you on with updates on Disney Cruise Line, MSC Cruises, and one of Royal Caribbean’s Oasis-class cruise ships.

Freedom of the Seas is the first Royal Caribbean International cruise ship to set sail with guests from the U.S. It’s been 15 months in the making since Royal Caribbean first announced it would shut down cruises from the US for 30 days on March 13, 2020.

The ship departed PortMiami on Friday with 93% of guests fully vaccinated and it kicks off a busy 4th of July weekend. Freedom of the Seas will operate 3-night weekend and 4-night weekday getaways to Royal Caribbean’s private island of Perfect Day at Cococay along with a call in Nassau, Bahamas.

After 15 months on hold, Carnival Cruise Line has finally restarted operations. Carnival Vista became the first ship in the fleet to restart by departing out of Galveston, Texas, on Saturday. The celebrations started with a “Back to Fun” ribbon-cutting ceremony on board attended by Carnival Cruise Line president Christine Duffy, local officials, and the Carnival Vista captain. Guests were then given a fun-filled welcome as they arrived on board.

The ship is sailing with 2,940 guests, and 888 of those are newbie Carnival cruisers which is very impressive indeed. During the first voyage, the Carnival Vista is calling at Mahogany Bay (Isla Roatan), Cozumel, and Belize City.

Sister ship Carnival Horizon is also restarting operations this weekend out of Miami, Florida. And after initially being denied to fly to the U.S., Carnival Cruise Line brand ambassador John Heald will now be on board during the ship’s first cruise back.

So the ship is departing on Sunday from the cruise capital of the world on a six-day voyage including calls to Amber Cove and two days at Half Moon Cay, Carnival’s private island in the Bahamas. Carnival Horizon was to call in Bimini for the first time, but that stop was canceled just for the July 4 sailing.

More Carnival cruise ships will begin to restart operations through July and August as follows:

Do keep checking for all the latest updates from Carnival Cruise Line including the new changes that will be on board for the initial sailings.

The luxury cruise line Crystal Cruises also has resumed operations for the first time since Spring 2020. Crystal Serenity departed out of Nassau, Bahamas, on Saturday, a new homeport for the cruise line. The vessel will operate round-trip voyages from Nassau through November 13, 2021. The stunning island of Bimini is also an embarkation port for guests, along with calls to destinations in the Bahamas.

Joyous and eager officers, staff, and crew of Crystal’s flagship welcomed guests on board.  A Junkanoo parade entertained guests in a lively Bahamian tradition of music, dancing, and colorful costumes at the pier. . The ship received a water cannon salute as she left the harbor with the sounds of Crystal Cruises’ signature sail away song.

Crystal Serenity is sailing with fully vaccinated guests and crew as part of its Crystal Clean+ protocols.

MSC Cruises held a steel cutting ceremony on June 28 in the shipyard where its newest ship, MSC Euribia, is under construction. The vessel will be the second ship of three ships in the MSC line-up powered by environmentally friendly fuel of Liquified Natural Gas (LNG) and the 22nd ship in total in the MSC fleet.

MSC Euribia has been named after the Greek goddess of mastery of the seas, a more than fitting name for a vessel of this size. Like her sister ship MSC World Europa, she will weigh in at approximately 205,000 gross tons and carry 6,850 passengers, making it one of the biggest ships in the world.

The ship, which will be the company’s most environmentally efficient yet, will be built at the Chantiers de l’Atlantique shipyard in St. Nazaire, France. She will enter service in June 2023.

Disney’s plans for a test sailing have been pushed back due to inconsistent test results. Disney Dream was scheduled to depart on June 29 from Port Canaveral, Florida, on a two-night simulated cruise. The ship was the second in the U.S. to be approved by the CDC to operate the sailing to stress tests new protocols.

With the ship not reaching the requirements for the CDC, it does now mean that Disney Dream is listed as red status. The vessel is considered to have positive results by the CDC, and the Disney Dream will need to reach green status to be allowed to sail and receive its conditional sailing certificate.

It is a setback for the cruise line, which was to sail on Tuesday with crew members as volunteer passengers. It’s not yet known when the ship will eventually operate the simulated sailing, but it’s likely to be sometime in July.

Oasis of the Seas Test Cruise from New Jersey

The CDC has approved Oasis of the Seas to operate a test sailing which will take place out of the Cape Liberty cruise port in Bayonne, New Jersey. This will be the first test cruise from the port.

Oasis of the Seas will depart on its test sailing on August 22, 2021, and it will arrive back on August 28, 2021, which is longer than the usually 2-night simulated cruises we’ve seen so far. This will allow the cruise line to stress test any protocols under the eye of the CDC.

If all goes well, the ship will then receive its Conditional Sailing Certificate. Once the certificate is received, Oasis of the Seas will be allowed to resume revenue cruises.

Those are just some of the major cruise stories from the week, we’ve got even more including updates to the Carnival HUB App, a major milestone for two Virgin Voyages cruise ships, a new dining venue revealed on Mardi Gras, Explorer of the Seas being used to house Surfside first responders and a lot more.