It's an important week for the cruise industry as two new cruise ships are to begin sailings for the first time. 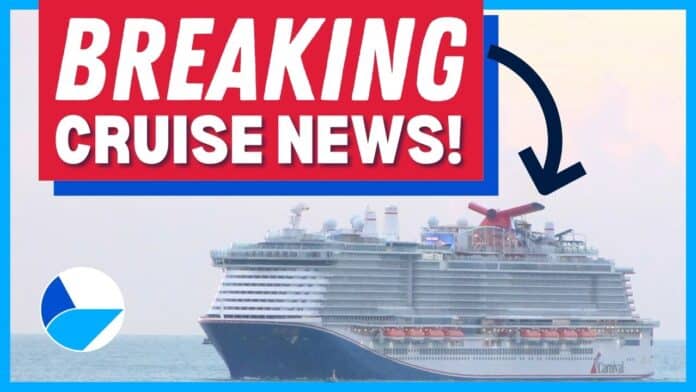 It’s an important week for the cruise industry as two new cruise ships are to begin sailings for the first time. We’ve also got the latest major news stories from the week and guess what, it’s all good!

It’s just been another hectic week of cruise news as cruise lines continue to move forward on resuming operations. From this week, we’ve got the latest on Carnival Cruise Line’s new Mardi Gras which is departing today out of Port Canaveral, and Royal Caribbean’s Odyssey of the Seas which is also departing today but out of Fort Lauderdale, a very busy day for the two new cruise ships. Also, the latest on restarts from the week including the comeback of Alaska!

No doubt you already know, but the most anticipated new cruise ship of 2021 is setting sail today on her first revenue sailing. After almost a year of delays, Carnival Cruise Line’s Mardi Gras will depart from her homeport of Port Canaveral. The ship will begin sailing a seven-day itinerary and on the first voyage, she will make a call in San Juan, Puerto Rico; Amber Cove in the Dominican Republic, and Nassau in the Bahamas.

It’s a huge milestone for the cruise line as Mardi Gras is not just the most advanced in the fleet but also features the first roller coaster at sea, fully powered by Liquified Natural Gas (LNG) and has tons of new features and venues onboard which guests are excited to enjoy.

The day before on July 30, the cruise line held a preview day on board for travel advisors and the media. It was the first time Mardi Gras got to showcase all the interior spaces and during the day a number of venues were opened including Rudi’s Seagrill developed by celebrated chef Rudi Sodamin and the Heroes Tribute Bar.

Odyssey of the Seas Cruises Begin

There’s another new cruise ship setting sail with guests for the very first time and that’s Royal Caribbean’s Odyssey of the Seas. She is departing from Fort Lauderdale today to finally kickstart service after months of delays.

The vessel will become the seventh in the fleet to restart operations and for the first time, will be able to showcase all her features and spaces including a Caribbean-inspired pool deck, an Action-packed top deck, loads of dining venues, and of course the popular North Star that offers unforgettable 360-degree views from 300 feet above sea level.

The ship is sailing a range of Eastern and Western Caribbean itineraries and the inaugural cruise today is an eight-night voyage including visits to Oranjestad, Aruba; Willemstad, Curacao; and of course a cruise would not be complete without a call at Royal Caribbean’s own private island of Perfect Day at CocoCay. Odyssey of the Seas will then arrive back to complete her inaugural cruise in Fort Lauderdale on August 8.

The ship is the second Quantum ultra-class which is an evolution of the Quantum-class ships. Odyssey of the Seas is 169,000 gross tons with a guest capacity of 4,198 at double occupancy along with 1,550 international crew members.

Cruise ships have started sailing Alaska once again and it all started with Royal Caribbean’s Serenade of the Seas which first departed from the Port of Seattle on July 19. It follows a successfully simulated sailing to stress tests protocols and making sure guests and crew remain safe. The ship is now sailing week-long cruises including calls to Juneau, Sitka, Ketchikan, and Icy Strait Point.

The Celebrity Millennium operated by Celebrity Cruises became the second major cruise ship to resume operations to Alaska. The ship departed Seattle on July 23 on a seven-night voyage with visits to Ketchikan, Endicott Arm, Dawes Glacier, and Juneau. The ship is sailing a total of 11 roundtrip cruises through early October 2021.

Majestic Princess operated by Princess Cruises resumed sailings to Alaska on July 25 out of Seattle. The vessel will continue sailing from the port through September 26, 2021. The ship will offer seven-day voyages, including calls at Juneau, Skagway, and Ketchikan, along with the views of Glacier Bay.

It’s the first time Princess Cruises and Holland America Line have restarted operations in the U.S. making a major step forward for them. Sister line Carnival Cruise LIne has already restarted in the U.S. and that continues with the Carnival Miracle.

The ship departed the Port of Seattle on July 27 with guests on board for the first time since the start of the pandemic. The Spirit-class vessel is now sailing seven-day voyages that include a call in Skagway, Juneau, and Ketchikan, along with the stunning views of Tracy Arm Fjord.

After a 500-day suspension, Norwegian Cruise Line has finally restarted operations. Norwegian Jade set sail from the Greek port of Piraeus (Athens) on July 25, marking the official return of NCL. The ship is also the first in the fleet to homeport in Athens.

The ship is sailing with stringent measures with a 100% vaccination rate onboard its ships for both crew and guests.

For its first outing from Piraeus onboard Norwegian Jade, which sailed July 25, only 1,800 passengers were on board. Norwegian Jade will be sailing around the Greek Islands on 7-day itineraries visiting iconic Greek ports. Although the cruise line has extensive safety measures, the vessel will be sailing at a limited capacity.

When will other NCL ships restart sailing?

Allure of the Seas is the first in her class to operate a test sailing and will become a reference to help her sister ships, Symphony of the Seas and Oasis of the Seas, for when they commence their test sailings.

The Allure of the Seas departed Port Canaveral, Florida, on July 27 to undergo tests of health and safety protocols onboard. Stress testing measures as part of a simulated sailing come from the U.S. Centers for Disease Control and Prevention (CDC). Due to the recent lawsuit by the state of Florida, a test cruise is no longer required. However, cruise lines, including Royal Caribbean, are still following the CDC guidelines to ensure guests and crew remain safe.

The ship sailed with volunteer passengers, and it comes after the cruise line opened up applications for those interested to submit their details in the hope of being chosen. There were more than 600 people on board, including volunteer guests, employees, and travel partners.

During the two-night cruise, the Oasis-class vessel made a call at Perfect Day at CocoCay, the cruise line’s own private island in the Bahamas. The ship arrived back in Port Canaveral on Thursday.

The next oasis-class ship to commence a test sailing will be Symphony of the Seas out of PortMiami on August 1. Oasis of the Seas will also operate a test cruise departing out of Cape Liberty on August 22.

Holland America Line took delivery of its third Pinnacle-class cruise ship on July 30. A handover ceremony took place at the Fincantieri Marghera shipyard in Italy which was attended by representatives from the cruise line and the shipyard.

The Rotterdam will remain on hold until its transatlantic crossing on October 20, 2021, from Amsterdam, Netherlands, to Fort Lauderdale, Florida. This will also allow the crew to familiarise themselves with the new vessel and prepare for the first guests in October.

Rotterdam is the third Pinnacle-class cruise ship at 99,800 gross tons and a guest capacity of 2,668 and 1,340 cabins. The ship follows the design and features of sister ships Koningsdam and Nieuw Statendam. Rotterdam is the seventh ship to bear the name for the cruise line.

So those are just a handful of the major stories from the week, we’ve got even more including Royal Caribbean modifying its testing policy, Carnival Cruise Line adjusting some itineraries, new spaces revealed for the new Disney Wish cruise ship, The former Carnival Fascination sailing in China, UK international cruises reopening and a lot more.