Weekly cruise news update with the latest developments in the cruise industry as ships restart operations. 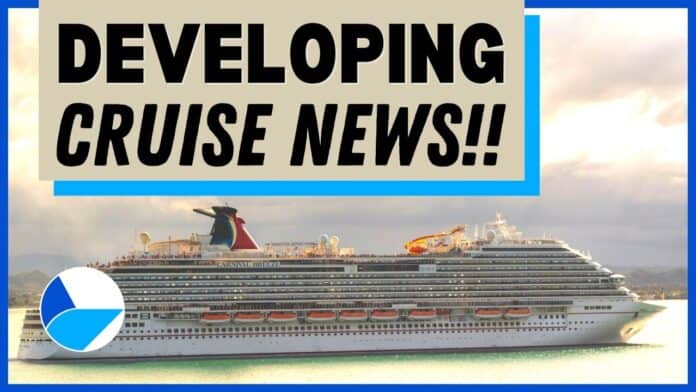 It’s time to get you all updated with the latest cruise news as the industry continues to make a comeback including the third Carnival cruise ship restarting, Canada finally plans to reopen for cruise ships and new developing news with a cruise ship in the UK suffering from a technical issue.

We’ve got coverage as the third Carnival cruise ship resumes operations and the second out of Galveston in Texas, a Fred Olsen cruise ship remains in port with a technical issue, the latest updates from Royal Caribbean on another test sailing and volunteer passengers along with huge news in Venice and Canada!

We start with some developing cruise news with the Borealis as the ship has suffered a technical issue and remains in Portsmouth, England. Fred Olsen Cruise Lines has said that they know what the issue is and working on resolving it.

The guests on board are being allowed to enjoy all the facilities and being kept fully updated. With the issue still being worked on, Borealis will not be able to arrive in Liverpool on time for the next Scenic Orkney and Faroe Islands voyage. As a result, the cruise line has canceled that cruise.

The ship was scheduled to depart from Liverpool on July 17 on a 5-night Scenic Orkney and Faroe Islands cruise. The hope is that the issue can be resolved before the following departure on July 22, which is also out of Liverpool.

The Carnival comeback is well and truly underway now that the third ship in the fleet is restarting operations. Carnival Breeze departed on Thursday out of Galveston, Texas, on a four-day western Caribbean itinerary.

The ship is making a call in Cozumel, Mexico, the only port during the cruise, before returning to the homeport. Carnival Breeze is also offering five-day cruises departing on Mondays and Saturdays, including calls in Cozumel and Costa Maya or Progreso, Mexico.

Carnival Miracle will be the next ship to resume sailings when she departs Seattle, Washington, on July 27. The Spirit-class vessel will kickstart cruises in Alaska for the first time in over a year. Mardi Gras will finally begin cruises for the first time on July 31 out of Port Canaveral, Florida. More Carnival ships will also resume through August.

When it comes to the cruise industry, Canada has become one of the most locked-down markets in the world, but now, finally, after 16 months, the government is ready to reopen and end the ban on passenger cruise ships.

The ban will no longer be in effect from November 1, 2021, and as long as cruise ships can comply with health protocols, vessels can resume sailings from that date. The country is ready to push forward the economy due to the improved situation in Canada.

On February 4, 2021, the government announced that the ban on cruise vessels would remain until February 28, 2022. With a ban already in place since Spring 2020, it would have meant a much longer ban on cruises compared to other major cruise markets such as the US, UK, and Europe.

We’ll just have to wait and see when the cruise lines will make a return, do keep checking cruisehive.com for all the latest developments.

It has finally happened after years of debate and frustrations, Venice is to ban cruise ships over 25,000 gross tons, longer than 180 meters, and higher than 35 meters starting from August 1, 2021. Ships will not be allowed to sail the historical part of town and will need to sail to Porto Marghera, which is only a few miles away.

Critics have stated the ships do irreparable damage to the environment and the foundations of the city. Not only that, many feel the large cruise ships are an eyesore in the skyline of the city. Several incidents with accidents involving cruise ships have not done the cruise companies any favors.

Sailings from and to Venice have always been popular; in fact, Venice is one of the most popular ports in the Mediterranean to take a cruise from. The sail away from the docks in the city has long been a dream destination for many cruise fans which will now come to an end.

Royal Caribbean has plenty of simulated sailings coming up, and the cruise line has announced that it will begin randomly selecting volunteer passengers this week. It comes after more than 350,000 people responded and showed their interest in becoming a test passenger last year.

The cruise line set up a “Volunteers of the Seas” Facebook group last year due to the huge interest and popularity of being on a simulated cruise. A signup page was set up where people have been able to register their details in the hope of being selected.

Royal Caribbean has decided to move forward with electing volunteers but closed down the application page. Those interested and 18 years old and over only had until the end of July 13 to sign up.

A simulated sailing is not going to be like a usual cruise. There will be health personnel from the US Centers for Disease Control and Prevention (CDC) on board to assess the cruise line’s protocols and procedures. Protocols will be stress-tested, and if all goes well, the cruise ship will then receive its Conditional Sailing Certificate from the CDC.

Ovation of the Seas Test Sailing

Royal Caribbean can now move forward with a simulated sailing on Ovation of the Seas thanks to approval from the CDC. The ship will depart Seattle, Washington, on July 30 for a short sailing to stress test protocols.

CDC inspectors will be on board to assess the protocols and procedures, and if all goes well, Ovation of the Seas will then receive her Conditional Sailing Certificate.

Ovation of the Seas is currently scheduled to begin cruises out of Seattle on August 13. The vessel follows Serenade of the Seas, which has already completed its test cruise and will be the first in the fleet to restart Alaska sailings on July 19.

Those are just some of the big news headlines from the week, we’ve got even more including a 132-night world cruise selling out in under three hours, Crystal Cruises to begin sailings out of Boston and New York, MSC Virtuosa to have a naming ceremony in Dubai, Seabourn to begin cruises from Miami, Norwegian Cruise Line sues Florida and a lot more.

You can also catch up on any of our previous news updates at the Cruise Hive YouTube channel.