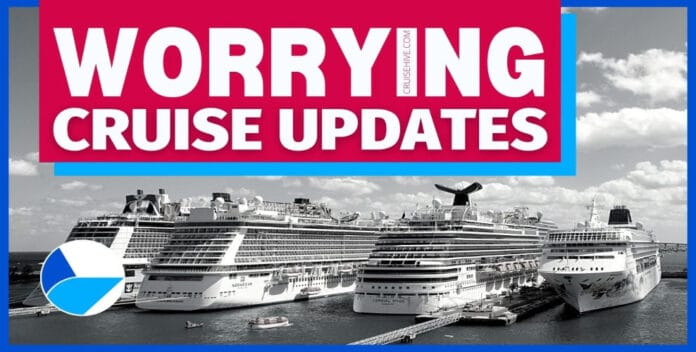 It sure has been a worrying week of cruise news as we still don’t know when cruises will really resume, is it May, is it June or could even be July?

Let’s start with Royal Caribbean as the cruise line has decided to extend its Cruise with Confidence cancellation policy. Effective from February 1, 2021, for all bookings created by April 30, 2021, on sailings on or before April 30, 2022, guests will have the flexibility to cancel their cruise up to 48 hours prior to sailing and receive a full credit of the cruise fare paid.

This now provides further peace of mind for those who are still planning on booking a cruise during these difficult times. The cruise line has cancelled operations in the U.S. through April and the situation remains very fluid so the Cruise with Confidence program really is essential.

Royal Caribbean will also continue to offer their “Best Price Guarantee,” where guests can choose to change the price and promotional offer on their reservation up to 48 hours before their cruise.

Lift & Shift to Be Discontinued

Keeping with Royal Caribbean, it was announced this week that its Lift & Shift program would be discontinued. The cruise line has posted that from February 1, 2021, Lift & Shift would no longer be an option.

The program allows guests to move an exiting booking to a qualifying sailing date on or before April 30, 2022. There are some requirements for this such as the itinerary type and within 4 weeks before or after the original booking.

However, Vicki Freed who is Royal Caribbean’s Senior Vice President of Sales & Trade recently said that Lift & Shift will still be available only if Royal Caribbean cancels a sailing and those guests have an active booking.

We finally know where Pacific Princess is heading! And it didn’t come as a surprise! Princess Cruises recently announced the ship has been sold to an undisclosed buyer and we now know that buyer is Azamara, yes, the cruise line which Royal Caribbean is selling to Sycamore Partners.

So Pacific Princess will join her new fleet for an inaugural season in Europe in 2022. But before that, she will undergo a makeover that will match her sister ships of Azamara Journey, Azamara Quest, and Azamara Pursuit.

It’s been a busy week for Carnival Cruise Line with a ton of deployment changes impacting several ships including the transformation of the much anticipated Carnival Radiance.

Let’s take a look at the changes:

A more positive update from Carnival this week as the cruise line and PortMiami reached a major milestone. The new Carnival Terminal F at the port broke ground and construction has officially started.

Miami-Dade Mayor and the Carnival Cruise Line President, along with county commissioners and construction partners, used ceremonial shovels to officially mark the beginning of construction on the expansive 471,000-square-foot facility.

Terminal F will be completed by the time the second Excel-class cruise ship Carnival Celebration debuts from the port in November 2022. It will be a hugely important year for the cruise line with its 50th Anniversary and the new LNG mega-ship which will be a major part of those year-long celebrations.

The ship is currently under construction at the Meyer Turku shipyard in Finland.

Worrying developments coming from one of the most important cruise ports in the world. Port Canaveral, Florida is projecting larger than expected losses for 2021, amounting to $43.12 million.

While this could mark a huge loss for the port in general, it is not only the cruise lines and Port Canaveral that feel the impact of the COVID-19 pandemic.

Port Canaveral has reduced its staff from 268 positions to 153, primarily because of lost revenue related to the cruise industry shutdown. According to the Florida Ports Council, the pandemic’s combined impact will likely cost Florida a total of $22 billion in economic activity, $775 million in tax revenue, and 170,000 jobs for 2021, extremely worrying figures which is no doubt going to take years of recovery.

Is July Looking More Likely for Cruises to Resume?

This week there has been a lot of chatter and reports with hints that cruising may not resume in the U.S. until July.

Norwegian Cruise Line crew members received a letter from the cruise line recently about being repatriated once again. These are non-essential crew members who had not long returned to the ships in anticipation of the resumption of cruises operations.

Norwegian Joy and Norwegian Encore are set to be the vessels sailing the crew back home to countries such as India, Indonesia, and the Philipines. Norwegian Cruise Line did recently announced a further suspension until May but is this now a sign that the pause is expected for even longer?

Officials at Port Canaveral also said this week that it’s expected that cruises won’t resume from the port until July. Now this is nothing official from the cruise lines but maybe they know something we don’t.

Patrick Scholes who is a Wall Street Analyst has also said that the restart of cruising in the United States could be pushed back to July or even later. This is due to a number of factors including no sign of the global pandemic improving. If cruise lines do end up waiting for the vaccine that may take some time and could result in cruise lines being forced to delay even further.

So there are multiple hints that cruising could be delayed again, but let’s be honest, it’s expected now. We do still hope cruises do resume in May with the three major cruise lines but it really does depend on the CDC and the new Biden administration. Hopefully, we’ll hear something soon as the CDC has been very quiet these days, maybe the calm before the storm, who knows.

Those were just some of the major headlines this week. We’ve got all the latest developments including where the three major cruise lines currently stand on vaccines, new ships being delivered despite the hold on operations, Carnival’s Mardi Gras now being delayed four times, and a lot more insights into all things cruise.