All the cruise news updates you need to know from the week as there is new hope that the cruise industry in the U.S. will make a comeback and cruises in the UK are about to restart. 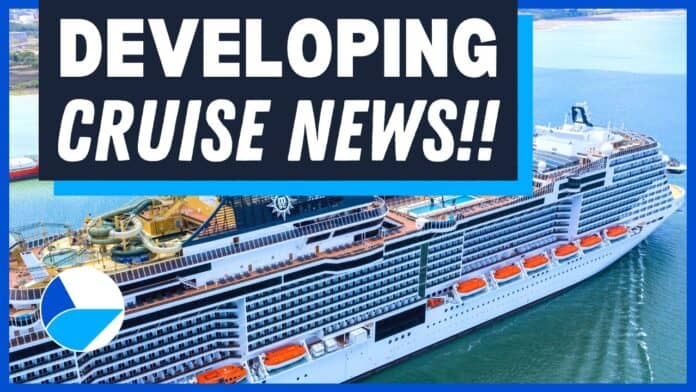 All the cruise news updates you need to know from the week as there is new hope that the cruise industry in the U.S. will make a comeback and cruises in the UK are about to restart.

If you haven’t had a chance to catch up on all the latest developments in the cruise industry then we’ve got some of the major cruise stories from the week. It has been a mixture of news with further cancellations from Carnival Cruise Line and Princess Cruises, a new cruise ship being revealed by Norwegian Cruise Line, Alaska cruises are back on the table, Carnival Sensation arrives in Mobile, and MSC’s new cruise ship has arrived in Southampton ready to restart the UK cruise industry.

We start with the new MSC Virtuosa which arrived in Southampton in anticipation of her maiden voyage and kickstarting the UK cruise industry. Just days from now, the new Meraviglia-Plus class cruise ship will depart, a huge moment for the industry and the start of a busy summer season of UK domestic sailings.

The giant new vessel arrived at the Port of Southampton in the UK on Wednesday afternoon for the very first time. Many welcomed the new ship, and MSC Cruises UK even did a live broadcast covering the momentous moment. Port tug boats made the traditional welcome by spraying water, and the ship eventually arrived at Port of Southampton’s City Terminal, Berth 101.

The MSC cruise ship will now remain in port to prepare for the first voyage and this includes taking on stores. There will be 1,000 guests on board and the ship is already sold out. The cruise line has already said that all crew members are being vaccinated as part of a fleetwide vaccination program. This will no doubt be completed while the ship is in port.

Crew members will be busy setting up their departments and making sure everything is in place, ready for the first guests.

Princess Cruises is very much an international cruise line that operates across multiple continents. With the ongoing travel limitations worldwide, the Carnival-owned cruise line has now canceled select cruises in the Caribbean, Mexico, California, and the Mediterranean.

Here are the following cruises that are now canceled:

Then of course option 3 allows guests who no longer wish to cruise with Princess at all in the future to choose a full refund using an online form. This will need to be requested by June 15, 2021.

Good news for Alaska! A massive victory for Senator Lisa Murkowski and Senator Dan Sullivan this week in their efforts to start up cruises in Alaska. The US Senate passed the Alaska Tourism Restoration Act (ATRA) bill that will temporarily allow cruises to resume to Alaska from US ports without stopping in Canada.

While the cruise industry and CDC have been making strides towards a resumption of cruising from the US, cruises to Alaska were still a considerable uncertainty.

Two factors that prevented the cruise lines from sailing to Alaska were the Passenger Vessel Services Act and the Canadian Cruise ship ban Interim Order No. 5. Both have now been circumvented with the Bill. However, the Bill has not yet been signed into law as it still needs to pass the US House of Representatives and be signed by President Biden.

It means that cruises to Alaska could sail along with cruises from Florida and Texas in early to mid-July, saving at least a portion of the cruise season in Alaska. An industry thousands count on for their income.

Both Senators spoke to the Senate after the legislation passed to urge the House to pass the Bill as soon as possible to prevent Alaskan communities from losing out on another tourism season.

Carnival Aims to Restart in July

There is no doubt that resuming operations out of the U.S. is tricky, including for “America’s Cruise Line,” Carnival Cruise Line. The Miami-based cruise line now aims to restart with just three or four ships from Florida and Texas in July.

The cruise line will start with Carnival Breeze on July 15 and Carnival Vista on July 3 out of Galveston in Texas, and Carnival Horizon out of PortMiami in Florida on July 4. These will be the first three Carnival ships to resume operations in July.

For Carnival Horizon, it does depend on whether sailings longer than 7-days will be permitted. If that is not the case, then 6- and 8-day sailings after and including July 10 will be modified to week-long cruises instead. Guests will be notified of any changes.

Carnival is looking for a solution for ships to visit Alaska. If this is the case, Carnival Miracle will assume some sailings from Carnival Freedom’s departures out of Seattle, Washington.

It does mean that all other departures from the U.S. are now canceled through July 2021. The other ships won’t restart until August at the very earliest and a lot does also depends on the US Centers for Disease Control and its Conditional Sailing Order.

We’ve already seen the Carnival Breeze and Carnival Vista recently make a return to the Port of Galveston, and now the Carnival Sensation has arrived in Mobile as the cruise line prepares for its long-awaited return to service.

The fantasy-class cruise ship was welcomed by fans lining up along the Waterfront at Cooper Riverside Park. It’s the first time the vessel has entered the port and a chance for cruise fans to have a first look as she arrived.

Even though the Carnival Sensation is not among the first ships in the fleet to resume operations this July, it’s an important step forward for preparations. The crew members had the opportunity to get vaccinated in the cruise terminal by USA Health workers. The crew was also treated with gumbo from the popular local seafood restaurant, Wintzell’s Oyster House that was delivered to the ship.

Carnival Sensation is now the second oldest ship in the fleet and joined in 1993. She’s 70,367 gross tons with a guest capacity of 2,052 at double occupancy.

And finally, we end with some exciting news about the next new class cruise ship from Norwegian Cruise Line, named Norwegian Prima. After the teasers the cruise line released last week, it has released the full details on the first of six new vessels. The reveal includes the release of several worldwide itineraries, an in-depth look at the outside decks, suites, and cabins, and the luxury food, beverage, and entertainment options Norwegian will offer onboard.

The hull art that Norwegian Cruise Line ships are famous for extends to the ship’s forward bow for the first time. Each of the six ships is expected to cost somewhere around $850 Million.

With the Prima class of ships, Norwegian will try to put the guest experience first and foremost, and that is especially clear when one looks at the amount of space available on board.

Norwegian Prima will have the most outdoor deck space of any new cruise ship, including more total pool deck space than any other ship in NCL’s fleet, as well as multiple infinity pools outdoor walkways.

So there we go with the week’s major cruise news, we’ve got even more including the launch of a brand new cruise line in the UK, Baltimore’s cruise terminal opening back up, updates from the CDC on the Conditional Sailing Order, new health protocols detailed for Carnival Cruise Line crew members, and a possible long-term return to Galveston for Norwegian Cruise Line from November 2023.

You can also take a look at last week’s cruise update right here.